These 8 Actresses Proved Women Can Carry A Summer Blockbuster

Summer movie season is almost over and women may just have come out ahead this year. At the beginning of the summer, I guessed whether various summer movies would be sexist based on their trailers. I was right about many movies: The Other Woman did not pass the Bechdel test and Emily Blunt did have a surprisingly robust role in Edge of Tomorrow. But while studios may have been predictable, audiences did something this summer that I didn’t expect. They voted for women with their dollars.

When given the choice between traditional testosterone-fueled action movies and films starring women, audiences chose the fairer sex. The Fault in Our Stars starring Shailene Woodley beat the Tom Cruise action blockbuster Edge of Tomorrow at the box office. Lucy, an sci-fi action flick starring Scarlett Johansson, surprised box office analysts with a massive opening weekend that trounced Hercules. And the Angelina Jolie movie Maleficent is currently the fourth highest grossing film of the summer in the U.S., ahead of tentpole films like X-Men: Days of Future Past, The Amazing Spider-Man 2 and Godzilla.

In part, audiences came out for these films because they have blockbuster fatigue: there are only so many summers we can spend watching cities be destroyed, tortured heroes struggle with the great burden of their powers and robots fight one another. Edge of Tomorrow, Hercules, X-Men, Spider-Man and Godzilla all fit in this tired mold.

Hollywood is also finally giving women a chance to shine with roles that are more complicated than the damsel in distress, and it’s paying off. But many great actresses are still being criminally underused: I want an X-Men movie with just Jennifer Lawrence and Ellen Page; Dawn of the Planet of the Apes wasted the talents of Keri Russell; and Tammy, starring Melissa McCarthy and Susan Sarandon, was a good reminder of what happens when talent is underserved by the vehicle. Yet these were exceptions to a solid summer for actresses. Here are the highlights:

At this point a bromance movie starring Seth Rogen is mandatory summer viewing (from Knocked Up to This Is the End), supplanting, to some extent, classic rom-coms. The bromance in question this summer was between Rogen and Zac Efron. And though those two were undeniably the stars of the film, Rose Byrne had the funniest, best role that a woman has gotten in this sort of movie to date.

I’ve written on the sneaky feminism of Neighbors before, but to sum up: Usually the wife in these movies is a nag. But Byrne escaped that trap. When he wrote the film, Rogen said he wanted to create a wife that was “just as fun-loving and irresponsible as the guy” and a couple that “got along really well.” Rogen even went so far as to include a scene where the couple bickers over who has to be the wet towel in the relationship and who gets to be the delinquent—gender stereotypes be damned.

Angelina Jolie in a scene from Maleficent
Frank Connor—AP/Disney

Maleficent grossed almost $235 million domestically, thanks to Angelina Jolie. Even though the critics weren’t wild about the film, most were wild about Jolie’s performance and hailed the “bewitching” return of a true movie star. Maleficent was Jolie’s first film in four years, and the actress proved that she can still carry even mediocre movies to box office success.

The role also didn’t to relegate Jolie to the classic fairy tale template. It turns out that adults and children alike want to see tropes more complicated than the pretty princess and the evil stepmother, even in fantasy films.

MORE: Maleficent and 16 Other Famous Queens of Mean

Shailene Woodley in Fault in Our Stars and Divergent

Shailene Woodley—even if she says she’s not a feminist—is doing a lot to help women in film with the roles she chooses. In different ways, Woodley bucks convention in both Divergent and The Fault in Our Stars. The former movie elevates the girl to hero status and relegates her boyfriend to a side-kick role, the same trick that made The Hunger Games, another franchise based on a young adult novel, a success. The Fault in Our Stars similarly turns convention on its head: forget the manic pixie dream girl, Gus is Hazel’s manic pixie dream boy: a cute, positive love interest who forces Woodley’s Hazel to try things she never would have done before.

Audiences embraced the new star who refuses to be put in a corner: The Fault in Our Stars edged out the Tom Cruise vehicle Edge of Tomorrow with $48 million its opening weekend (Edge made $28.7). Meanwhile, Divergent had an even more impressive $56 million opening weekend, topping the box office.

MORE: Shailene Woodley on Why She’s Not a Feminist

Emily Blunt in Edge of Tomorrow

Before the movie premiered, Edge of Tomorrow was oft-called a hybrid of some Tom Cruise movie you’ve already seen and Groundhog Day. But it turns out Edge was a surprisingly original and delightful film, thanks in part to Emily Blunt. I can’t remember another movie where a woman gets to be the best soldier on the battlefield. She plays Mr. Miyagi to Cruise’s Karate Kid, training him how to fight, not the other way around.

Blunt’s imposing action hero (so unmoved by emotion that she’s able to shoot Cruise over and over again without blinking) promises more robust roles for women in action movies in the future: even the third Expendables movie has added a woman.

Unlike 21 Jump Street in which Brie Larson shined as Jonah Hill’s love interest, 22 Jump Street relegated everyone who wasn’t Jonah Hill or Channing Tatum to one-liners. But Jillian Bell delivered her one-liners the best. Workaholics’ Bell steals a scene at the end of the movie when she and Hill get into a punching match. “Jillian makes me want to quit show business and realize I am a complete fraud,” Hill has said, “because she is the funniest person I have ever met in my life.”

Like Byrne, Bell proves that there’s room for women even in bromances. Maybe we’ll even get some more gal-mances? (Bra-mances? Womances? Somebody come up with a word for this.) The Bridesmaids team is working on another comedy directed by Kristen Wiig, so there’s still hope!

MORE: How Comedy Central Got Guys to Think Feminists Are Funny

It may not be a blockbuster, but the most talked about movie of the summer was Boyhood, Richard Linklater’s fictional movie that he filmed over the course of 12 years. Audiences watched a boy grow from age six to 18 and his family grow with him. Enter Patricia Arquette, who plays the boy’s unappreciated working single mom with a penchant for marrying bad men. Arquette’s character is a good person who maybe isn’t the best mom, a rare role in Hollywood where mothers are usually superwomen or evil.

And though Arquette began and ended the 12-year-process a beautiful movie star, she allowed some of her transformations—weight gain and loss, the inevitable wrinkles that come with age—to be filmed without vanity. It’s an incredible performance that will hopefully open up the industry to more realistic and varying portrayals of women.

Scarlett Johansson in Captain America: The Winter Soldier, Lucy and Under the Skin

Lucy rocked the box office, beating Dwayne “the Rock” Johnson’s Hercules with an opening weekend of just under $44 million. (Hercules only grossed $29.8 million.) Johansson proved that she can carry her own summer action flick and fueled the fire for a possible Black Widow movie, starring Johansson’s character in The Avengers.

But that wasn’t all Johansson did this summer. She also appeared in Captain America: The Winder Soldier and played a (literally) man-eating alien in Under the Skin. Johansson’s beauty is dangerous in a conventional way as Black Widow, and in a fascinatingly creepy way in Under Her Skin and Lucy. For the last year, the actress has been working to prove she’s more than just a pretty face, meditating on what it means psychologically to wield the power of her beauty. If she continues seeking out unique roles, Johansson has the potential to make the summer blockbuster a little more interesting than it has been for the past decade.

MORE: Scarlett Johansson, Lucy and the Future of the Female Action Star

Zoe Saldana as Gamora in 's Guardians of the Galaxy
Marvel

Zoe Saldana in Guardians of the Galaxy

Guardians of the Galaxy set a record for biggest August opening weekend, grossing a whopping $94.3 million. That was at least partly thanks to Saladana, the most famous face on the Guardians poster. (Poor Bradley Cooper and Vin Diesel are hidden as a CGI raccoon and CGI tree, respectively.) Saldana has spoken openly before about how she gravitates toward sci-fi films (like Star Trek, Avatar and Guardians of the Galaxy) because they tend to offer better roles to women. Other actresses are making the same calculus, like Jennifer Lawrence in the Hunger Games franchise, Blunt in Edge of Tomorrow and Johansson in Lucy.

Saldana’s performance in Guardians of the Galaxy has only strengthened the outcry by audiences for a female superhero film. Marvel Studios President Kevin Feige struggled to explain last weekend why he hadn’t greenlit one yet even though the box office success of Lucy, Guardians and Hunger Games suggests that it would be a good business decision. Thankfully, Sony confirmed this week that a female superhero film is finally on the way. It will star a woman from the Spider-Man franchise. Hopefully a Black Widow movie or a Wonder Woman movie or even one starring a female Thor will follow.

MORE: Why Outer Space Is the Best Place to Be for Young Actresses 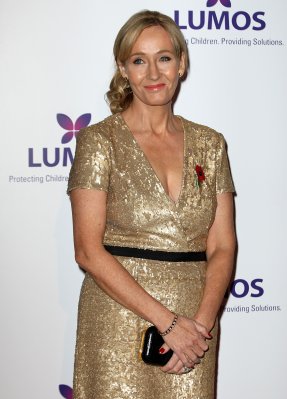 What Would J.K. Rowling Do?
Next Up: Editor's Pick