A Dutch firm is attempting to crack one of aviation’s greatest unsolved mysteries: how Malaysia Airlines Flight 370, a Boeing 777 carrying 239 people, vanished in an age of surveillance and technology.

The Australian Transportation Safety Board (ATSB) said Wednesday it selected the Dutch technical consultancy Fugro to relaunch the search for MH370 after a month-long tender process that solicited bids the world’s most advanced deep sea searchers, according to the firm’s statement.

Unlike some of its fellow bidders, Fugro historically hasn’t focused on deep-sea recovery, but rather on geotechnical services like underwater mapping for off-shore oil and gas clients. Other bidders like the UK-based Blue Water Recoveries and the Odyssey Marine Exploration specialize in recovering modern shipwrecks or search-and-recovery in deep ocean exploration.

Fugro, which has pursued some underwater search missions in European waters, attributes its win not to advanced technology, but instead to a calculated balance.

“In the initial phases of the search, a number of companies deployed very accurate and very sophisticated autonomous underwater vehicles. The advantage of such technology is that it’s very accurate, but the bad side is that it takes a lot of time to cover a square meter,” Rob Luijnenburg, Fugro’s director of corporate strategy, told TIME. “What we’re doing now is a combination of sufficient resolution and the capability to survey a reasonably large seabed in a relatively short time.”

Fugro had previously worked in conjunction with Bluefin Robotics to develop the Bluefin-21 vehicle used in search efforts during April and May. At that time, officials had suspected the plane’s pinger had run out of battery, and swapped in the Bluefin-21 for the Towed Pinger Locator. Other Fugro missions devoted to search-and-recovery have involved partnerships with the UK to recover helicopters downed over water, and ship recoveries near the Netherlands.

Fugro has already been directly involved in the MH370 search, too. Since June, one of Fugro’s ships, the Fugro Equator, has been working with a Chinese ship to conduct preliminary bathymetric surveys (i.e. underwater mapping of the terrain) around the target area. While radars mounted on the two ships have already mapped nearly 60,000 sq. km—much of that area is in the designated search area—Fugro’s AUS 60 million contracted mission involve only the Fugro Equator and another of Fugro’s ships, the Fugro Discovery. The two ships will each tow sonar scans near the seabed to produce higher resolution maps and possibly locate debris.

“Previous estimates [of the seabed] are very, very rough. The resolution is not good enough to find little bits of pieces of aircraft—that we do with the [towed] sonar equipment,” Luijnenburg said.

The designated search area, about 600 miles south of the previous phase’s area, was decided in June by Inmarsat scientists after re-analyzing satellite data. The area, roughly double the size of Massachusetts, is the latest patch of ocean in what’s been a hopscotch around the largely uncharted South Pacific. Estimates indicate that existing maps of this territory are about 250 times less accurate than surveys of Mars and Venus.

To navigate such difficult underwater terrain, further complicated by treacherous weather conditions, Fugro has connected with experts including Donald Hussong, a sonar guru. Hussong, who was brought out of partial retirement to assist Fugro’s sonar towing logistics, said the two vessels will each be equipped with 9 or 10 km. of cable that will tow scanners about 100 to 150 m. above the sea floor. The existing maps, while crude approximations, will be enough to prevent the sonar from impacting the ocean floor, which could dislodge the equipment.

Hussong estimates that the relaunched search over 60,000 square km. will span approximately 9 to 10 months—a heartbeat compared to the nearly 2 years it took locate Air France Flight 447’s debris, a mere 6.5 km from the center of the search. If the Dutch firm’s towed sonars locate debris, then the Woods Hole Oceanographic Institution, which aided in locating the Titanic’s wreckage in 1985, will contribute two autonomous underwater vehicles.

But thus far, absolutely nothing—not even a suitcase, life vest, or crumpled paper—has turned up. Fugro is hopeful that the wreckage will be located, but the Dutch firm acknowledged that there’s a chance the massive search might yet again emerge fruitless.

“If we have contrast between the hard surfaces of debris and sediments naturally on the bottom [of the ocean], then we should find it.” Hussong told TIME. “If it’s some place on a rocky bottom or the side of a cliff, it’ll be difficult.”

Inmarsat, however, the agency that dictates the search area alongside Australian and Malaysian authorities, remains more than cautiously optimistic that Fugro will solve MH370’s mystery.

“We remain highly confident in the analyses conducted,” an Inmarsat spokesperson told TIME in an e-mail, adding that the scale of the task shouldn’t be underestimated. “The next phase of the search is being handled by those trained in this sort of work and we are hopeful that evidence will be found.” 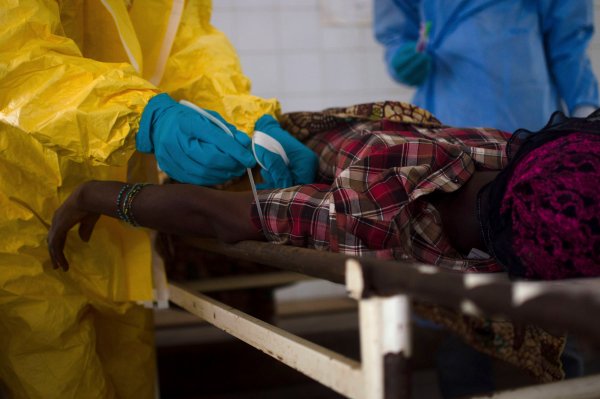 Airlines Have Been Issued With Guidelines on Handling Ebola
Next Up: Editor's Pick