Alex Salmond, First Minister of Scotland, talks the media after debating with Alistair Darling chairman of Better Together in a televised event from the Royal Conservatoire of Scotland on August 5, 2014 in Glasgow, Scotland.
Jeff J Mitchell—Getty Images
By Mirren Gidda

On September 18, residents of Scotland aged 16 and older will be able to vote “yes” or “no” in a referendum that will pose the question: “Should Scotland be an independent country?”

With six weeks to go before the vote, Salmond, Scotland’s First Minister, went head-to-head with Alistair Darling, a Scottish MP for the Labour Party and the leader of the unionist Better Together campaign. The two-hour debate took place at the Royal Conservatoire of Scotland in Glasgow and was only broadcast on the Scottish television channel STV. Viewers elsewhere in the U.K. were told to tune into a live stream on STV’s website. Unfortunately, the service quickly crashed, infuriating people across the U.K.

Those who managed to watch the debate saw Salmond come down hard on Westminster, the seat of the British parliament, which he claimed didn’t represent Scotland’s interests. He told the 350 audience members that Scotland could easily be a successful independent country, adding: “For more than half of my life, Scotland has been governed by parties the we didn’t elect at Westminster… They are the same people who… are telling us that this country can’t run our own affairs.”

Calling the referendum “the opportunity of a lifetime,” Salmond insisted “no one, absolutely no one, will do a better job of running Scotland than the people who live and work in Scotland.”

Darling cut a less emotive figure. The former U.K. Chancellor of the Exchequer—the country’s finance minister—told listeners the vote concerned their future and warned against patriotism clouding their judgment. “There are times that, for the love of our family and the love of our country, it’s sometimes best to say ‘no’—not because we can’t, but simply because it is not the best thing to do,” Darling said.

Advising caution, Darling added: “In six weeks’ time, we will make the biggest decision that we’ve ever made here in Scotland—and remember this, if we decide to leave, there is no going back—there’s no second chance.”

Alex Salmond, First Minister of Scotland and Alistair Darling, chairman of Better Together take part in a live television debate hosted by Bernard Ponsonby at the Royal Conservatoire of Scotland on August 5, 2014 in Glasgow, Scotland.
Jeff J Mitchell—Getty Images

Though Salmond started the debate with confidence, Scotland’s Herald newspaper reported that he then “dawdled downhill” with a performance that was “woeful” compared to Darling’s more spirited one. Perhaps unsurprisingly, Darling emerged as the winner Tuesday night with 56% of the 512 people surveyed by ICM for the Guardian newspaper declaring him victorious.

Much of the debate centered on questions over Scotland’s financial future. On February 13, the U.K.’s current Chancellor, George Osborne, said that if Scotland left its 307-year-old union with England and leaves the U.K., it would be unable to keep the pound. This proved a sticking point in the debate, as Salmond began to falter when Darling persistently questioned him over his plans for Scotland’s economy.

Again and again, Darling asked Salmond “what is plan B?” But the First Minister only said he was “in favor of keeping the pound sterling” over the euro, despite being booed by at least one audience member.

“Any eight-year-old can tell you the flag of a country, the capital of a country and its currency,” said Darling. “I presume the flag is the Saltire [Scotland’s national flag], I assume our capital will still be Edinburgh, but you can’t tell us what currency we will have.” Darling added that the E.U. might not allow Scotland to re-join if they become independent, meaning they couldn’t adopt the euro.

Salmond, for his part, repeatedly asked Darling to accept that Scotland could be a successful independent country, claiming that it has contributed £8 billion ($13.5 billion) to the U.K. treasury. Blair Jenkins, chief executive of the pro-independence Yes Scotland campaign, declared the debate, “a clear win for the Yes campaign—a positive, optimistic and visionary case presented by the First Minister against another dose of negativity and scaremongering from Mr. Darling.”

Yet the debate failed to impress the Scottish newspaper The Scotsman. In an editorial, they wrote: “For a debate that looked too long on paper it was actually surprising how few topics got a reasonable airing. If time allocated is any indicator of interest or concern among the public then there is no doubt that the post-independence currency is the stand-out issue.”

Salmond’s performance on that topic will likely have disappointed his supporters who were hoping for a strong victory that could boost their low polling figures. The most recent poll says independence has just 34% of voter support. Those championing Scotland’s independence will be hoping that in the next debate, due to take place later this month, their leader can turn things around. 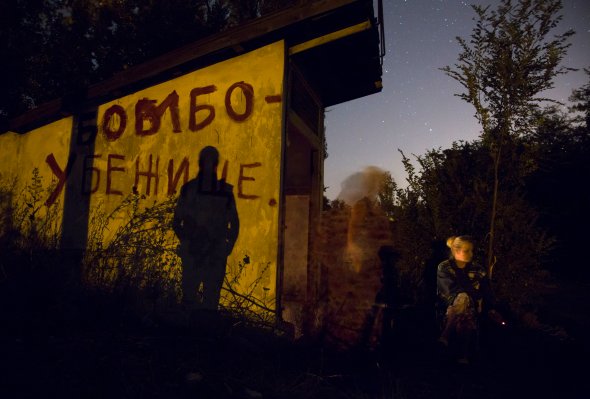 Russia Now Has 20,000 Troops on Ukraine Border, NATO Warns
Next Up: Editor's Pick