A man flashes a V sign as soldiers from the proindependence Polisario Front parade during a ceremony marking the 35th anniversary of the proclamation of independence of the Sahrawi Arab Democratic Republic in the Western Saharan village of Tifariti on Feb. 27, 2011
Dominique Faget—AFP/Getty Images
By Per Liljas

When the Sahrawi refugees of North Africa drink tea, they make each successive cup sweeter than the last. The first cup, they explain, is bitter like life, the second sweet like love. The third one is sweeter still, they say — like death.

If that’s a rather mournful thing to say about the simple pleasure of drinking a warm beverage, it’s because these refugees are a mournful people. They are former soldiers, or the children of former soldiers, from one of the world’s forgotten conflicts: the Western Sahara war. For decades, about 100,000 of them have languished in camps for the displaced, waiting to fight anew in a struggle that never picks up, and killing nothing more besides time.

North Africa has become ever more volatile since the Arab Spring, run through by militant Islamist outfits and Latin American drug cartels. The Algerian group al-Qaeda in the Islamic Maghreb (AQIM) has established footholds in Mali, Niger and Mauritania, and recently staged its deadliest attack in Tunisia. Ansar al-Sharia has filled the power vacuum in several parts of Libya after Muammar Gaddafi’s downfall, and Morocco has, in recent weeks, raised its security alert because of the fear that terrorist fighters will return from Syria and Iraq. Boko Haram and al-Shabaab are extending their reach from the west and the east. And on Wednesday, U.S. President Barack Obama announced an annual $110 million investment to counteract the increasing terrorist threat across the African continent.

Stuck in the middle of this vortex are the Sahrawis. The next lot of extremists could easily arise among them.

A territory about the size of the U.K. stretched out along the Atlantic, between Morocco and Mauritania, Western Sahara is often called “Africa’s last colony,” since it never gained independence when Spain decamped in 1975 — 91 years after seizing it in 1884. Instead, Morocco invaded and fought a 16-year-long war against a Sahrawi army of independence, known as the Polisario Front. When the war ended, the Sahrawis were left with the arid easternmost part of the territory, and half of the population fled to six refugee camps on the Algerian side of the border. Morocco took territory along the seaboard. To defend it, the Moroccans built a fortified barricade half the length of China’s Great Wall, and laid before it an estimated 9 million mines.

The U.N. called for a referendum on self-determination for the Sahrawis in 1991, but since Morocco had moved in hundreds of thousands of its nationals into its part of Western Sahara, the sides couldn’t agree on the electoral rolls. The Sahrawis have since rejected an offer of autonomy within the Moroccan nation and remain keen for the U.N.-backed poll.

Morocco has meanwhile consolidated power over the territory it occupies, while the Sahrawis nurture the embryo of their would-be state — the Sahrawi Arab Democratic Republic (SADR) — among the refugee camps in Algeria. SADR is currently recognized by 46 nations — its most vocal supporter being Algeria, which has a long-standing enmity against Morocco — and is a full member of the African Union. But because of strong Western support for Morocco — it is seen as the most stable state in the area and a bulwark against terrorism — the dream of an independent homeland seems ever more like a mirage.

That has bred a good deal of resentment. In 2012, three Spanish aid workers were abducted in the camps, and over the following year several dozen Sahrawis were reported to have taken part in the militant Islamist advances in Mali. U.N. Secretary-General Ban Ki-moon warned of the risk that: “fighting in Mali could spill over into the neighboring countries and contribute to radicalizing the Western Saharan refugee camps.”

J. Peter Pham, director of the Washington, D.C.–based think tank Atlantic Council’s Africa Center, believes that is already happened. “The disconcerting fact is that because these camps are closed, there needs to be at least tacit approval on the part of those responsible to permit infiltration and exfiltration,” he tells TIME. “Whether that’s because of policy or corruption, I don’t know.”

In October 2012, Polisario reportedly set up a counterterrorism squad to protect the camps, but Pham views this initiative with skepticism. “In a way, it’s like breeding vermin and then setting up pest control,” he says. “The ongoing maintenance of a phantom state that will never exist creates the climate for extremism.”

According to Pham, Polisario should accept the offer of autonomy, because an independent state would not be viable. “The last thing Africa needs is another failed state, and that’s exactly what Western Sahara would become if Morocco left,” he says. “There are no real natural resources which can be commercially exploited, it would never be viable by itself. An independent Western Sahara would be an even bigger breeding ground for terrorists.”

That, of course, is not how the Sahrawis or their supporters see it. There is a possibility of offshore oil, and phosphates, fish and arable land are already being exploited in the occupied territory in violation of international law — and with Western connivance. In 2011, a major fishing agreement between Morocco and the European Union was scrapped, partly because fishing in Western Saharan waters was thought controversial, but in December 2013 it was surprisingly renewed. The new agreement talks about benefits to the “local population,” but makes no specific mention of the Sahrawis.

“The E.U.’s interpretation of the legal opinion is preposterous,” Hans Corell, former legal counsel of the U.N. and the author of its legal opinion on Western Sahara’s resources, tells TIME. “It is utterly embarrassing that the international community has been unable to solve this conflict. Since Morocco is able to capitalize in Western Sahara, there will be no incentive at all to change the situation.”

Neither are the E.U. or the U.N. providing any mechanism for humanitarian monitoring in the territory. The U.N. has had a peacekeeping force in Western Sahara since 1991, but it’s the only such operation in the world lacking a mandate to monitor human rights, because of an annual French veto in the Security Council. Isabella Lovin is one of several members of the European Parliament who have tried both officially and unofficially to enter Western Sahara to take soundings among the Sahrawis, but she’s been both denied and deported.

“If neither the U.N. nor the E.U. are allowed to monitor in Western Sahara, how can human rights ever be guaranteed?” Lovin asks.

Protests are commonplace in the occupied territory, but they are invariably broken up by police, since any questioning of Morocco’s claims to Western Sahara is punishable with prison terms. Activists are commonly prosecuted on trumped-up charges such as assaulting a policeman or planning riots. The binding evidence is often a written testimony, supposedly made by the defendant during extended pretrial detention without access to legal counsel. Because of the lack of monitoring, it is often impossible to tell whether these statements are true, false or coerced.

“These trials are the most blatant violations of human rights and end up in people being locked up for years,” Eric Goldstein, Human Rights Watch’s deputy Middle East and North Africa director, tells TIME. “Police beating demonstrators, however, is a weekly ritual.”

Some rights activists worry that the protests, beatings and trials will escalate now, as oil companies off the Western Saharan coast intensify their exploration. In 2005, Norway’s Government Pension Fund, the world’s largest sovereign-wealth fund, started divesting in Kerr-McGee, because their operations in Western Sahara constituted an “unacceptable risk for contributing to other particularly serious violations of fundamental ethical norms.” However, Kerr-McGee’s American partners Kosmos Energy, continued the enterprise.

Currently, Kosmos Energy has a drilling ship on its way to the region. Mohamed Alouat is one of many Sahrawis who have protested against Kosmos’ plans. A video from June 10 purportedly shows him taking to the streets with a poster that says the oil is Sahrawi, before a policeman assaults him with a razor blade.

“They beat my mother so she fainted,” Alouat says. “This all happened to me now because I held a poster against Kosmos. Where are our rights?”

Even though it is still some way from actual oil production, Kosmos Energy has gone out of its way to publicly promise that “local populations” will benefit from any discovery. “We believe that economic development of the territory can and should proceed in parallel with the U.N. mediation process,” a Kosmos spokesperson tells TIME. “In fact, some experts believe a discovery may be the catalyst to lead a resolution of the conflict.” The energy company adds that it is in the process of engaging with a range of local stakeholders, “including Sahrawis.”

“If oil is struck, the Sahrawi future is forever ruined,” he says. “Morocco is the only country in the region that doesn’t produce oil, it is completely unthinkable that they would seek a solution with the Sahrawi if they make a discovery.”

That, of course, would only stoke frustration in the refugee camps. “Militant groups are operating in the camps and their influence is growing,” says the Atlantic Council’s Pham. That could make Africa’s last colony its newest terrorist hotbed. 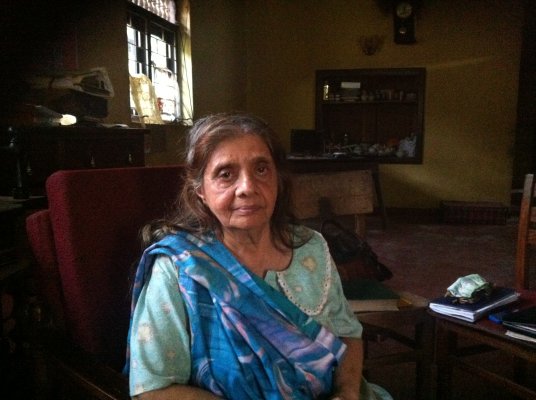