6,500-year-old human remains are displayed at the The Penn Museum, part of the University of Pennsylvania,, Aug. 5, 2014, in Philadelphia. The museum announced Tuesday that it had rediscovered in its own storage rooms a 6,500-year-old human skeleton believed to have been a man at least 50 who stood 5 feet, 9 inches tall.
Matt Rourke—AP
By Denver Nicks

An archaeology museum in Philadelphia said Tuesday it found a 6,500-year-old human skeleton in its own basement.

Yes. Its own basement.

Researchers at the Penn Museum, which is associated with the University of Pennsylvania, said they found documentation for the human skeleton while digitizing old records. The remains are extremely rare and date to 4,500 BCE. They were unearthed by archaeologists around 1930 during an excavation of the ancient city of Ur in modern day Iraq beneath the city’s cemetery, itself dating back to 2,500 BCE, Reuters reports.

The skeleton, which scientists have named Noah, is roughly 2,000 years older than any other remains found at the excavation site. The find could give scholars a new depth of understanding into everyday life during the little-understood time period.

Noah’s remains indicate he was muscular, about five feet-ten-inches tall and died at 50 years old. 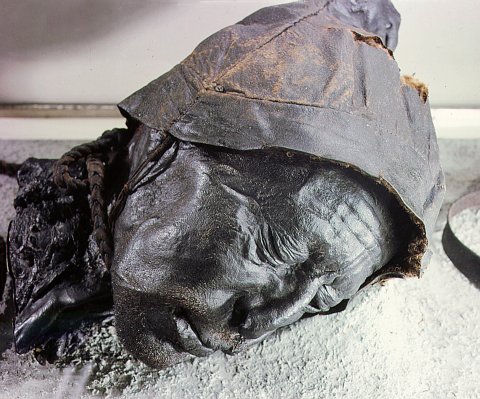 The Bodies in the Bogs: An Eerie Gift From the Iron Age
Next Up: Editor's Pick