On Monday, in Okoboji, Iowa, two undocumented youths confronted Iowa Rep. Steve King in a publicity stunt that charts a clear path to political pain for Republicans as the 2016 campaign season approaches. It is a quirk of the American system that to get elected President, candidates must meet with lots of regular people, along with full-time advocates posing as regular people, along the path to the White House. More often than not, these interactions are captured on video for eternity.

This process gives enormous opportunity and advantage to well-organized advocacy groups. In the 2008 election, a handful of groups from global warming advocates to anti-poverty crusaders fanned out across the early caucus and primary states to repeatedly ask the presidential candidates the same questions, effectively elevating their issue. Today, no group is doing this same thing as effectively as immigration reform activists, as the King video makes clear:

Notice Kentucky Sen. Rand Paul, the likely 2016 Presidential candidate, in the background at the beginning. His aide wisely advises him to leave his sandwich behind and clear out of the screen — and it’s a good thing he does. King, whose role in the political debate over immigration is basically the opposite of a firefighter’s role at a fire, does not disappoint. In a matter of minutes, he briefly but violently grabs the young woman’s hand in a misfired effort to quiet her, he notes condescendingly “you are very good at English,” he doubles down on his comment that drug smugglers at the southern border have calves “like cantaloupes,” he repeatedly calls Mexico a “lawless country,” and he accuses the two young people, both well-educated activists without legal documentation, of having no respect for the law.

Whatever position Republicans end up taking on immigration reform in the coming years, this is all political dynamite for the party. In the 2012 election, Republican Mitt Romney won only about 27% of the Latino vote, a number that will almost certainly have to increase if a Republican is to win in 2016. A majority of those voters have family roots in Mexico, a functioning country with significant law enforcement struggles, but one that King dismisses as “lawless.”

On the eve of the 2012 election, Latino Decisions did a poll of likely Latino voters, who made up about 10% of the electorate. The results showed clearly that Romney faced an overwhelming problem in selling those voters: Only 14% of the voters in the poll said Romney cared about the Latino community, compared with 66% who said Barack Obama cared. A significant percentage of this bias against Romney was born of mistakes he had made during the primary that had less to do with policy than attitude. As Republican National Committee Chairman Reince Priebus later said, “Using the word ‘self-deportation’—I mean, it’s a horrific comment to make.”

A poll taken after the 2012 election found that a strong majority of Americans—57% in total, including 60% of independents and 35% of Republicans—supported President Obama’s effort to give job permits to some undocumented immigrants who had been brought to country illegally as minors. This is the policy House Republicans voted last week to defund, with Steve King leading the charge. That makes him an easy target for activists. Ambushes like this are stunts. But in the system we have, they work. And this is just the beginning. 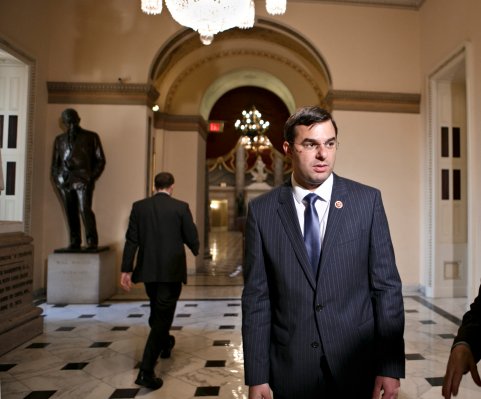 Why a GOP Iconoclast Will Likely Keep His Seat
Next Up: Editor's Pick