If the Gaza Truce Holds, What Then? 5 Possible Outcomes

An Israeli soldier sits in an armored personnel carrier flying the Israeli flag as they return from the border between Israel and the Gaza Strip after pulling out of the Palestinian enclave on Aug. 4, 2014, as Israel has begun withdrawing some ground troops.
Gil Cohen Magen—AFP/Getty Images
By Ilene Prusher / Jerusalem

Egypt announced that Palestinian factions declared a 72-hour cease-fire to begin on Tuesday at 8 a.m. Israel sat out of the Cairo talks that produced the humanitarian truce but said it would hold by the cease-fire, a government spokesman told TIME.

Whether or not the parties actually make it through a full three days with no air strikes or rocket attacks remains to be seen. Every other cease-fire effort undertaken since the escalation in early July has failed. But there is a more pressing question: What now? Who and what can put an end to the humanitarian disaster unfolding in Gaza — with 1,865 Palestinians and 67 Israelis killed so far – and also propose a longer-term solution?

Avigdor Lieberman, Israel’s Foreign Minister, on Monday offered a new idea for solving the Gaza problem: let the U.N. take control of the long-troubled territory. “Everyone is asking, What happens after the operation ends? Suppose Israel defeats Hamas. There are a few options. International control of Gaza, by the U.N., should certainly be considered,” Lieberman said at a press conference. This has been tried in other war-torn locales, from Kosovo to East Timor. Why not Gaza?

Well, for one thing, it would be an enormous and expensive undertaking for the international community to take responsibility for Gaza. It would also require Hamas and other militant groups to agree to participate in such a scheme, which is difficult to imagine given that they’ve built their entire identities around what they view as legitimate resistance to Israeli occupation. Still, many of the key players here say that almost a month into the bloodiest phase in the Israeli-Palestinian conflict since the second intifadeh, some significant change must emerge at the end of it. TIME looks at five possibilities for how this could end: 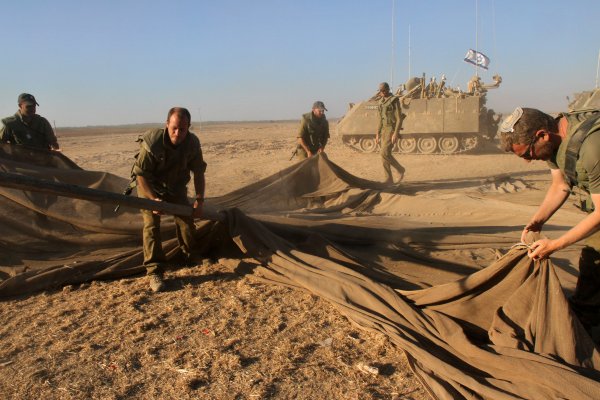 Israel Seeks Advantage by Reversing Course in Gaza
Next Up: Editor's Pick