Faith Leaders on Kids at the Border: Give Us the Children

Central American migrants ride a freight train during their journey toward the U.S.-Mexico border in Ixtepec, Mexico on July 12, 2014.
Eduardo Verdugo—AP
By Gabriel Salguero and Richard Stearns

Mother Teresa inspired millions at the 1994 National Prayer Breakfast in Washington, D.C., when she told attendees how she responded to mothers with unwanted pregnancies. “We have sent word to the clinics, to the hospitals and police stations: “Please don’t destroy the child; we will take the child.”

Mother Teresa’s eyes barely peeked above the podium, but she spoke with powerful resolve and appealing love. “Please give me the child,” she asked.

Today, there are thousands of children who are unable to be cared for by their communities or their governments. They are showing up like refugees at the southwest border of the U.S., often risking their lives on what is called the “el tren de la muerte” (the train of death), as they travel north through Mexico.

As the leaders of two Christian organizations doing relief and development work in the U.S. and Central America, we are asking government and faith leaders: Instead of seeing these children as a political crisis or legal dilemmas, what if we adopted Mother Teresa’s compassionate response? Give us the children.

Right now a boy named Chava (a pseudonym) is riding el tren de la muerte after fleeing El Salvador, where he lived until four weeks ago.

It’s amazing that Chava didn’t leave years ago. For the last four years he has been moving from city to city in El Salvador running from the gangs. It started when Chava refused to join one. “They tried shooting me several times. I just ran and saved my life, but I was forced to leave my hometown and moved to a different community.”

Chava thought he was safe because the gang he fled wasn’t active in the new community, but instead a different gang tried to recruit him. “They kill for a living, that’s what they do,” he said. “They do not respect anybody and try to enroll everyone, especially youth.”

Instead of attending high school the last four years, Chava has been running for his life. He only has a middle school education. He has few employment options and hasn’t been able to settle down in a community before the gangs catch up with him. “Many youth are in the same situation, we all have to move from one community to another to be safe and not get killed.”

Now that Chava has left El Salvador, returning home is even more dangerous. “If I go back, the gangs will kill me.” With two brothers already living in the U.S., Chava wants to join them.

Chava’s story illustrates why a comprehensive response is essential. Unaccompanied children arriving at our border must be treated fairly and humanely, but we must also address the root causes of the crisis—the conditions marked by violence and lack of economic opportunities in the children’s home communities in Central America.

These children are not merely seeking better jobs but are fleeing an intolerable situation. With this understanding, we are calling on the presidents of the U.S., Honduras, Nicaragua, Guatemala, and El Salvador to work closely together to strengthen child protection systems and reduce violence in migrants’ home countries as well as to ensure the humane treatment of children arriving in the U.S.

We believe that our governments together with our relief agencies can find ways to address comprehensively the issues of widespread gang-violence, extreme poverty, corruption, and other root causes of the massive immigration of children and young families.

We also call on our own Christian communities to do more to respond to the humanitarian crisis that is taking place all the way from the U.S. border to Central America. Already churches are taking in children in the U.S., ministering to migrants en route, and tackling the long-term causes of violence, poverty, human-trafficking, and corruption that are at the root of the crisis.

We know that faith-based organizations have a unique role to play in resolving this situation. In Honduras, youth leaders are rising up through a Bible-based curriculum called Channels of Hope that teaches young people about healthy life choices, how to handle sexual pressure and avoid pregnancy, self-esteem, and communication. This World Vision-backed program is turning into an alternative social support structure for youth who refuse to join the gangs. “We gathered weekly, and God was the center of everything,” said Ernesto, one of the leaders.

The network of youth groups have grown to include eight neighboring communities, and despite conflict with the gangs, they launched a summer camp. In an area where shootings are a daily occurrence, this group of nine youth networks is raising up future community leaders who are seeking to build a healthy neighborhoods. “God has a purpose for everything and we trust that Channels of Hope is leaving a big mark in the transformation of our lives. New children and youth with the desire to change the community have entered the network as I did at the beginning,” says Ernesto.

In addition, the National Latino Evangelical Coalition (NaLEC) is partnering with its congregations in the United States to provide shelter and care for children fleeing violence into the United States. NaLEC has also partnered with Esperanza and the Alianza Evangélica Latina to ensure we bolster church-sponsored sustainable programs for children and families in Honduras, El Salvador, and Guatemala.

Unfortunately, much more is needed across Honduras, El Salvador, and Guatemala to provide children with hope for the future within safe communities. We need compassionate leaders who, like Mother Teresa, have the courage to lead this great nation to say, “Please, give me the child.” 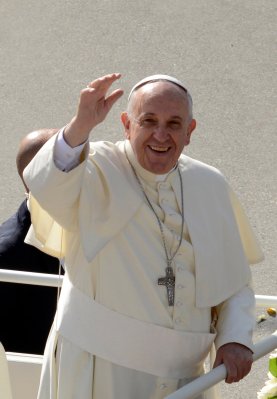 Pope Francis and the New Values Debate
Next Up: Editor's Pick