This week marks the 40th anniversary of the resignation of President Richard Nixon, the milestone for which the scandal-plagued politician is best remembered. But in 1952, when not-yet-President Nixon first appeared on the cover of TIME magazine, the scandal was decades away. He was a relatively young man, 39, whose political career was just taking off. Having successfully moved from the House to the Senate, he was the Republican nominee for Vice President, a man whose background could have still been unknown to readers.

In hindsight, it’s hard not to see foreboding or irony in the story that appeared under the headline “Fighting Quaker.” For example, his mother, the piece notes, preferred not to call the police on shoplifters at their family’s store, thinking of the shame it would bring to their families; Nixon apparently internalized the harm that could be done by exposing wrongdoings. Did he think of the harm he would do when he was the one exposed?

But it’s also easy to see why his life story would have been fascinating to voters. Here are nine things to know from the 1952 cover story.

He once worked as a carnival barker, for the “wheel of fortune” at the Frontier Days Rodeo in Prescott, Ariz. The Nixon family spent time in Arizona for the health of older son Harold, who had tuberculosis.

His parents had a lemon grove in Yorba Linda, Calif.—but, TIME noted, they would have rather grown oranges. (Nixon’s grandfather had moved to California from Indiana with the thought of growing the latter.) When the fruit farm proved “a lemon,” the family opened a general story in Whittier, Calif., called Nixon’s Market.

He played the piano and acted. His family, devout Quakers, attended church services four times a week. The young Richard Nixon played piano for the Sunday school. When he returned to Whittier after law school, he returned to work at the Sunday school when not busy as a divorce lawyer. He also participated in community theater. He met his future wife, Pat Ryan, while playing a fictional attorney in Night of January 16th, a play written by Ayn Rand.

His debating career began with bugs. In a seventh grade boys-vs.-girls debate on the relative merits of insects, Nixon asked an uncle who was an entomologist for a list of good things about insects, thus helping the boys’ team convince the judges that “insects are more beneficial than harmful.” However, he would later find that bugs weren’t so great: While in the South Pacific with the Navy, he said, the only things that bothered him—despite being under fire—were “lack of sleep and the centipedes.”

He worked his way through college, and lived in “a shack” during law school. While at Whittier College in his home town, he worked at Nixon’s Market. (He also helped his mom with the dishes, TIME noted, but that was probably not a paying gig.) After graduating, Nixon attended Duke University law school on scholarship, and lived “in a wooden patch a mile and a half from the campus” with three shack-mates.

He got into politics by answering a newspaper ad. In 1945, a Republican group was looking for someone to run against a popular Congressman in California. They placed an ad, which was seen by a family friend of the Nixons, who called him up and suggested he give it a shot.

But that early political career was dogged by the stench of by cannibalistic minks. When Dick and Pat Nixon moved back to California so he could run for office—they’d been in Baltimore before that—they ended up living next door to a family that owned “a smelly, cannibalistic brood of minks.”

He almost didn’t take the gig that got him national attention. Once he got to Congress, Nixon was offered a spot on the House Un-American Activities Committee, which had a terrible reputation. He hesitated before accepting, but his role in sorting out the Alger Hiss scandal—in which TIME editor and former Soviet spy Whittaker Chambers identified the State Department’s Alger Hiss as a Communist—brought him to the national stage, and led the GOP to encourage him to run for Senate, which he did successfully.

He never went to the movies. Never!

If that’s not enough to demonstrate that he charmed some Republican voters, perhaps the letters section from the Sept. 15, 1952, issue will: “There is very little—if anything—that his opponents will find in his career to criticize,” wrote one reader. That opinion would have seemed vindicated when the fall came, as Eisenhower and Nixon took the White House. But, as history showed, another reader had a firmer grasp on the situation: “Surely I’m not the only TIME reader,” wrote George Brasington Jr. of Waycross, Ga., “who is now convinced that the GOP picked a lemon in ex-Lemon Picker Nixon.” 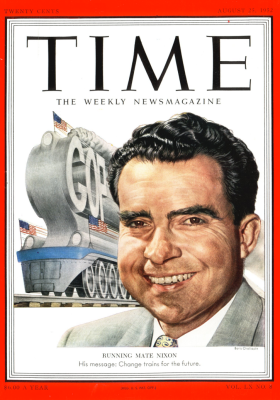 The 55 Times Richard Nixon Was on the Cover of TIME
Next Up: Editor's Pick