On Monday, the Toledo, Ohio, Mayor D. Michael Collins lifted the municipal ban on drinking water. The ban had left thousands of Toledo and Michigan residents without drinking water, which was contaminated by a toxin produced by an algae bloom in Lake Erie. If consumed, the toxin could cause symptoms like diarrhea and vomiting. Residents were told not to drink the water, use it to brush their teeth, or—most confounding of all—boil it.

What is an algae bloom, and why is it toxic?

An algae bloom is a heavy concentration of cyanobacteria, commonly known as blue-green algae. It looks like a huge mat, turns the bay around Toledo bright green, and produces a neurotoxin called microcystin, which makes people sick.

How does an algae bloom form?

There are a few reasons algae blooms form, but it’s primarily caused by runoff from farm fertilizers. In Toledo’s case, the phosphorus and nitrogen from these fertilizers runs into the Maumee River, which drains right into the Maumee Bay of Lake Erie, where Toledo is located. This spurs the growth of the blooms. The summer heat has likely also played a role in this particular algae bloom’s growth.

Is this a growing problem in water?

Yes. The EPA says there is not a federal standard for blue-green algae in water, but experts say it is in the process of considering one. Farm runoff is not very regulated, so the expectation, according to Cox, is that this kind of water contamination could happen again and again. About 2o or so years ago the U.S. took action to prevent the amount of runoff draining into the lake, and things were looking up. But now, environmentalists are worried we’ve backtracked.

How did the algae get into the drinking water?

The water intake for Toledo’s water supply is located right in the middle of the Maumee Bay where the algae bloom moved to. The water intake brought in both the blue-green algae and the toxins it produces.

Aren’t there purification systems that prevent that?

Yes, but they don’t necessarily address the blue-green algae toxins. The algae bloom moved very close to the water intake system, and the water treatment system experienced much higher levels than they had previously. It put a lot of pressure on the system. The conventional treatment plan the city of Toledo has is a multi-step procedure that removes dangerous pathogens and decontaminates the water in a variety of ways. To directly address the blue-algae toxins, it is using activated carbon to absorb and remove the toxins.

How did the contamination go away in just a couple days?

The EPA worked with Toledo over the weekend to sample the water at both the supply system and the drinking water system, and a couple of things happened. First, the algae bloom moved away from the water intake system, which could have been due to the wind. The second is that Toledo enhanced its treatment system with the aforementioned carbon to specifically address the blue-algae and its toxins.

I thought boiling water decontaminates it. Why couldn’t the residents boil their water?

Boiling water kills things like bacterial organisms, but it does not get rid of blue-algae toxins. Instead, boiling water decreases the volume of the water, and therefore increases the concentration of the toxins, making it worse.

What can be done?

Creating buffers, like plants and trees that stand between farms and the water, may help catch fertilizer chemicals before they get into water ways, spurring algae growth. Farmers could also, theoretically, use less fertilizer, though there are no regulations in place as of now. 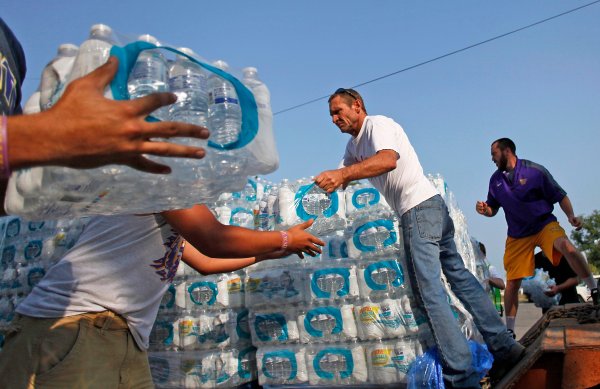 'Here's to You, Toledo'
Next Up: Editor's Pick