Israel Seeks to Gain Advantage by Reversing Course in Gaza

Israeli soldiers fold their equipment along the border between Israel and the Gaza Strip after they pulled out from the Gaza Strip on Aug. 3, 2014
Gil Cohen Magen—AFP/Getty Images
By Ilene Prusher / Jerusalem

The war continues and there is no victor, but Israel is gradually pulling most of its troops out of the Gaza Strip in a sign that in the course of a weekend, it decided to take a completely different tack in its war with Hamas.

After four attempts at a humanitarian cease-fire over the past few weeks, including a much vaunted one Friday that was supposed to last for 72 hours but instead collapsed after two, Israel decided that it was no longer pursuing a truce with Hamas. Instead, it opted for a unilateral withdrawal from Gaza, save a new buffer zone it is carving out along the border, in the belief that there was more to be gained from walking away from what had begun to seem like a merry-go-round of failed cease-fires.

On the one hand, the decision is a stunning reversal from what many had begun to expect from Israeli Prime Minister Benjamin Netanyahu, whose more hawkish Cabinet members have been calling for a reoccupation of the Gaza Strip. On the other, the decision to pull back ground troops while declaring, as Netanyahu did Saturday, that the operation continues, is a formula for the blood-soaked Israel-Hamas war to plod on while the world watches the death toll in Gaza rise and international diplomats grow increasingly befuddled by the question of what to propose next.

That bloodshed may have been part of Israel’s equation. Amos Yadlin, a retired major general of the Israel Defence Forces (IDF) and the director of the Institute for National Security Studies (INSS) at Tel Aviv University, told reporters Sunday that he thought reversing course was a wise move on the part of Netanyahu, as Israel faces growing international censure for its actions in Gaza. The Palestinian death toll now tops 1,800, according to its Ministry of Health, and on Sunday, Israel’s shelling of a U.N. school was vociferously condemned by the U.S. after 10 Palestinians were killed. It was the seventh incident of a school used as a shelter coming under attack, according to UNRWA.

The move also serves to deprive Hamas of the victory it has sought since the war began July 8. “We neutralize their main strategic forces, and leave them alone, without any achievement, without any demand, in their devastated place called Gaza,” Yadlin said. The change of tack is a “sophisticated, smart move,” he added, at least for the time being. “I don’t know if it’s sustainable for the long run. But we will have to see how Hamas will react, what kind of fire they will continue to use, and if we can live with it.”

It also gives Israel options on how to proceed. The mind-set goes that previous negotiated cease-fires, like the one that ended Operation Pillar of Defense in November 2012, served to “hamper” the IDF by limiting how it could respond. By unilaterally pulling troops out of Gaza — while declaring the key goals of the ground operation complete, including having destroyed some 30-odd tunnels — Israel believes it has gained the freedom to act as it sees fit.

“So if we want to proceed, we proceed. If we want to stop, we stop. If we want to initiate something else, we will initiate something else,” says Udi Dekel, a retired brigadier general, also of the INSS. “If Hamas continues to fire, we can fire. If we see any activity in the security perimeter, like digging another tunnel, we can attack them, because there is not any understanding or agreement between us and Hamas. So we keep all the possibilities in our hands.”

Hamas, for its part, says Israel will have no calm unless it negotiates the terms of a cease-fire. Among Hamas’ main goals is the lifting of an embargo on Gaza designed to squelch the economy and prevent Hamas from functioning. Many Palestinians argue this has turned Gaza into an open-air prison, while Israel argues that when it’s been lax in the past, Hamas has used the opportunity to build tunnels and bunkers.

Alongside its unilateral about-face in Gaza, Israel refused over the weekend to attend the cease-fire talks in Cairo as planned, calling the truce efforts futile. Israel says that Hamas broke one cease-fire too many, while Hamas political leader Khaled Mashaal told CNN on Saturday that it never agreed to let the IDF keep operating in Gaza during the truce, which it sees Israel having broken.

But there may be more to Israel shunning the talks than simply wanting to refuse to play ball with Hamas any further. Political scientist Yoram Meital notes that as Israel’s goals in the operation moved over the course of the few weeks — from rockets to tunnels to demilitarization of Gaza — the latter became the buzzword. The Palestinian Authority, Egypt, the E.U. and the Obama Administration said demilitarization would indeed be a good idea, but it would need to take place in the context of a comprehensive peace agreement.

“This is of course a very different perspective from Netanyahu’s view,” says Meital, a Ben Gurion University professor who specializes in Israel’s relationship with Egypt and the Palestinians. “While demilitarization is a very legitimate objective, Netanyahu is not ready to pay the price for this commodity. He understands perfectly well that by discussing this as part of the peace process, one of the meanings is that after several years, the Gaza Strip and West Bank would be discussed as one unified Palestinian territorial unit.” That, he notes, is the last thing the Israeli right wing wants.

So now the “new phase” of the conflict has begun. Columns of IDF tanks were seen cutting through the dust of Gaza’s outskirts and pulling out toward Israel Sunday, but the IDF’s air strikes on Gaza continued. The IDF said rocket fire continued over Tel Aviv, and in southern Israel. Israelis meanwhile, turned their attention to the dramatic end of what they had been told on Friday was the Hamas capture of IDF soldier Hadar Goldin. On Saturday night, Goldin was declared dead based on forensic evidence collected at the scene, and on Sunday he was buried before a crowd of thousands. Among them was his cousin — Israel’s Defense Minister, Moshe Ya’alon. 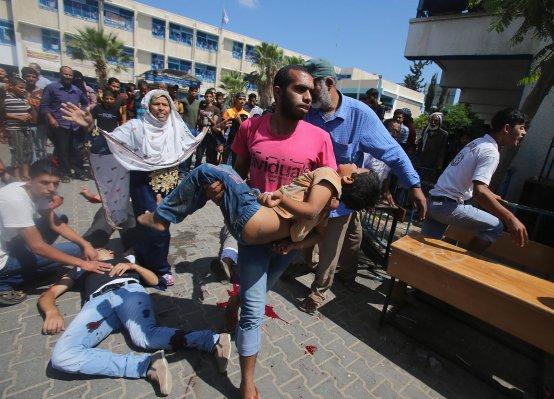 'The Battle Is Ongoing'
Next Up: Editor's Pick