In an interview with Comic Book Resources, Marvel Studios president Kevin Feige struggled to explain why he hasn’t green-lit a female-led superhero movie yet, despite the success of female characters in the current Marvel franchises, like Gamora in the new Guardians of the Galaxy film or Black Widow in The Avengers.

When the reporter asked, “How close are we to a Marvel film with a female lead? Because I’m feeling a groundswell of demand in that direction,” Feige avoided giving away any details about what female character might get a movie and when, but he said he supported the idea:

Despite his firm belief that Marvel Studios, which he runs, should make a female-led action movie, it has no public plans to do so in the future. (And Marvel has release dates planned through 2017.)

It’s true that Marvel is juggling a number of franchises: Avengers, Guardians, the new Ant-Man movie to name a few. But it seems that if Captain America or the Hulk can get his own film, maybe Black Widow ought to as well.

Indeed, the comments come just as Marvel Studios is drawing criticism for continuing to marginalize women in its films. Both male and female fans alike expressed their dismay when San Diego Comic-Con came and went last weekend without any mention of Black Widow — the most famous female character currently in the Avengers franchise — getting her own spin-off. And fans took to Twitter to complain about how Marvel erased Wasp, a female founding member of the Avengers team, from both the Avengers films and the upcoming Ant-Man movie. Feige calls it a chess game, but fans take the issue more seriously: it’s a matter of 50% of the population being able to see themselves represented in blockbuster films.

As the Marvel Studios chief himself points out, studios still fear that men will not see movies that star women. That’s why women made up only 15% of protagonists, 29% of major characters and 30% of all speaking characters in movies last year.

But a female-superhero movie would likely be a good business decision. Feige cites a number of blockbusters with women leads, including The Hunger Games franchise, which has grossed a total of $1.56 billion worldwide over two entries, and with two movies left to go. And an analysis of films from 2013 found that movies with strong female characters did better at the box office than those that didn’t.

Box-office numbers from the summer also indicate that audiences are ready for a lady-led Marvel film. Guardians of the Galaxy just had the biggest August opening weekend of all time. Much of that success is surely thanks to Guardian’s screenwriter Nicole Perlman, the first woman ever to pen a Marvel movie — and likely also due to Zoe Saldana, the only woman in the ensemble cast and the most famous face on the movie poster.

But even if Johansson hasn’t officially gotten her own movie yet, Marvel is taking small steps in the right direction: this fall the studio will premiere the TV series Agent Carter on ABC. The show will follow Peggy Carter, Captain America’s love interest/sidekick from the first Captain America film. And though the editors over at Marvel Comics reportedly have no say over which of its characters make it into Marvel Studios films, the comic-book writers recently retired the man who used to be Thor and replaced him with a woman. Could Chris Hemsworth, who currently plays Thor, one day pass his hammer to someone like Charlize Theron for a movie or two? Anything is possible. 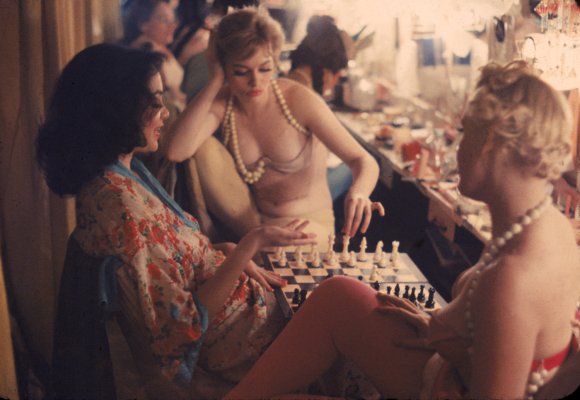 Showgirls at Work and at Play: Gordon Parks' Nightclub Portraits
Next Up: Editor's Pick