When Stephen Colbert invited newcaster-turned-education-reformer Campbell Brown on his show last night, he unwittingly unleashed a firestorm of controversy and, some say, distanced him from his liberal brother-in-fake-news, and fellow Viacom employee, Jon Stewart.

Several hundred of Colbert’s leftwing fans protested outside of his Manhattan studio before the taping, and thousands more took to the blogosphere, decrying Brown as an elitist union-buster and accusing Colbert of being “a sell out like the rest of them.”

“Maybe Colbert ought to watch the Jon Stewart show to learn about education issues!” wrote one commenter. “How idiotic of Colbert – IDIOTIC.”

In an era where liberals find themselves at each other’s throats over nearly every issue related to school reform—from charter schools to teacher tenure laws to the roll-out of the Common Core reading and math standards adopted by most states—advocates on both sides of the debate have been paying close attention to people like Colbert and Stewart, who have an outsized influence on liberal public opinion.

The otherwise dry policy debate has also drawn an unusual amount of star power. In May, the comedian Louis CK panned Common Core while the actress Eva Longoria and singer John Legend have come out in its defense.

Some have suggested that Colbert, who has been an outspoken proponent of other controversial school reform initiatives, like the charter school movement, seemed to be signaling his sympathies by inviting Brown as his guest. Brown has been at the center of a recent storm of litigation designed to overturn states’ teacher tenure laws, job protections that are held dear by teachers unions. Brown argues that such laws make it nearly impossible to fire incompetent teachers—a crucial step to making schools better.

While growing armies of liberal reformers, including the Obama administration, have backed Brown, her position remains wildly unpopular among traditional liberals who see such lawsuits as an attack on both teachers and their unions.

On these issues, Comedy Central’s other epicenter of fake-news, “The Daily Show With Jon Stewart,” has generally stuck closer to the liberal party line. Stewart, who hails from union-friendly New Jersey and whose mother was a public school teacher, has hosted Diane Ravitch, one of the teachers unions’ most outspoken defenders and a staunch critic of charter schools, three times, most recently in October.

He has also earned points among lefties for hosting controversial school reform figures, like former chancellor of Washington DC public schools Michelle Rhee, and then grilling them with tough questions. Last year, Stewart did not veil his distaste for Rhee’s strict program of teacher evaluation. “Are we hanging [teachers] out to dry, coming in every three years, saying here’s the new reform, you are going to teach to that… increase your scores or you are fired?” he asked her on air.

At first glance, the disparities between Colbert and Stewart’s guests seem to be a microcosm of the larger schism among Democrats on school reform.

On one side, progressive reformers like Brown and Rhee have been willing to attack teachers’ unions, back the charter school movement, support the rollout of Common Core, and call for a total overhaul of the status quo. Democratic leaders, like Corey Booker and Obama’s Secretary of Education Arne Duncan, have celebrated these moves as “brave” and “bold” steps necessary for real reform.

On the other side, Ravitch, teachers unions, and a growing chorus of liberal parents have resisted what they see as an overly ambitious, slash-and-burn reform movement that threatens to throw out the baby with the bath water. Ravitch has tirelessly backed the teachers unions, condemned charter schools, panned Common Core and argued that panicked statistics about the poor state of public education in America are an attempt at fear-mongering. “The test scores today are the highest they’ve ever been in history, the graduation rates are the highest ever in history, the drop out rates the lowest in history,” she told Stewart last fall.

More recently, Ravitch has lashed out against Brown, calling her anti-teacher tenure lawsuits harmful and out of touch.

So on which side does this leave Colbert and Stewart—two, albeit fake news anchormen who wield a considerable amount of influence over public opinion? The short answer is that it’s unclear.

After Colbert’s interview with Brown last night, both Brown’s supporters and commenters on Ravitch’s website claimed victory. Brown tweeted that she had had a delightful time, while Ravitch’s blog bubbled with gleeful notes describing how Colbert had dragged Brown through a series of tough questions.

“Now I’m no fan of unions, but why do you have your guns out for [teachers]? Is it the same reason I [do]—so they can quit their lavish lifestyles with their 1993 Honda Civics driving around town?” Colbert asked Brown right out of the gate, channeling the hardcore conservative caricature that he assumes during his show.

But while that question, and several others, might seem combative, Brown fans agreed that the interview itself was generous—if only because Colbert gave Brown plenty of time to explain her position: “The driving focus when we decide what our policy should be, what our laws should be…[is,] ‘Is this good for a child?’” Brown said, and the crowd erupted in applause.

“They’re going to clap because you’re playing the ‘Good for Child’ card,” Colbert said, grinning, before following up an ultra-softball question: “But isn’t this about equal education?”

While Colbert did corner Brown into admitting that she will not reveal the names of those who have donated to her non-profit, Partnership for Educational Justice—a major “win” claimed by Ravitch’s side—he did suggest that her appearance on the show would be a helpful fundraising tool. “You’ll get the Colbert bump,” he said.

When it comes to other controversial school reform issues, like Common Core, Colbert has been equally hard to pin down. In one segment, Colbert ruthlessly mocked some hard questions from a math exam designed to test school kids’ understanding of Common Core principles. In another segment, he made fun of those who oppose Common Core because it does not require kids to learn cursive.

Both Comedy Central stars will no doubt have more segments on school reform this fall, as Brown’s tenure lawsuits gain steam and Common Core rolls out in most schools. When they do, liberal advocates on both sides of the line will be reading closely between the lines. 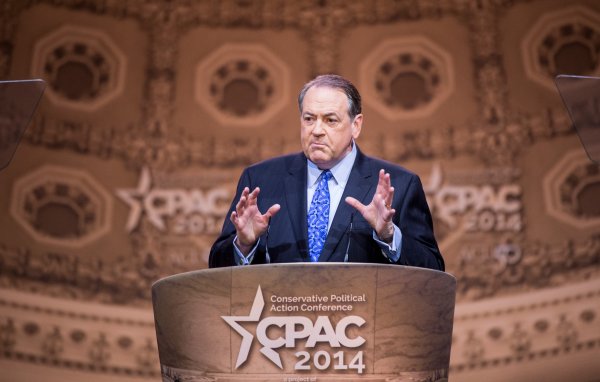 Conservative Christians Split on Common Core
Next Up: Editor's Pick