Iowa's Democratic Caucuses Will Be More Accessible to Voters in 2016

The Iowa Democratic Caucuses will be more accessible to voters in 2016, the state party chairman announced Friday, but obstacles to including military voters remain.

Iowa Democratic Party Chairman Scott Brennan presented a five-step proposal to increase accessibility to the first-in-the-nation presidential caucuses, including hiring a caucus accessibility director and instituting “satellite caucuses” to make voting more convenient for shift workers. At a meeting of the Democratic National Committee’s Rules and Bylaws Committee, Brennan also announced a proposal to create a state-wide military tele-caucus to allow those serving out of state or overseas to participate in the caucus.

But the Iowa party rejected calls to institute absentee ballot or proxies for the caucuses to enable military voter participation.

“Iowans did not want us to take any steps that would change what our caucuses are at their core – neighborhood gatherings of concerned and interested Iowans who want a say in the future of our country,” Brennan said. In 2008, then-Sen. Hillary Clinton complained that her third-place finish in the Iowa caucuses was partly the result of people who worked nights being unable to attend the evening caucuses.

A number of committee-members raised concerns with the proposal, questioning why the accessibility proposal couldn’t be expanded to other voters and the logistics of enabling as many as 1,500 Iowa Democrats living overseas to hold a discussion on a conference call.

“I’d certainly like to be a fly on the wall as they go ‘what!'” said Elaine Kamarck, a committee-member from Massachusetts who has written a book on presidential nominating processes, of the Iowa Party’s proposed meetings with the Department of Defense.

The Iowa Republican Party is similarly considering efforts to open its caucus up to military voters, and is likely to follow a course similar to the Democratic Party’s plan.

At Friday’s meeting, the Rules Committee approved an amendment to the national party rules to require states to include a description of its voter accessibility efforts in its convention delegate selection plan. 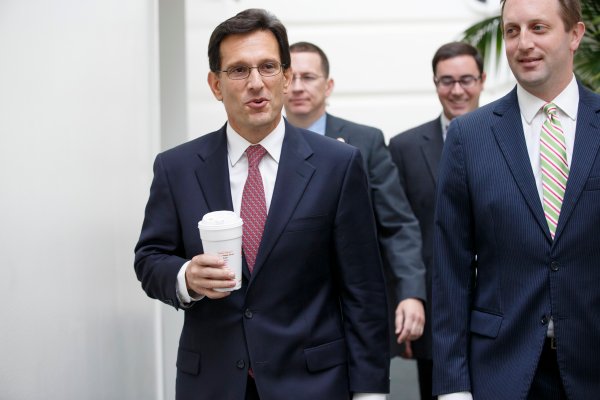 Cantor to Resign Months Before Term Ends
Next Up: Editor's Pick