Members of the Red Cross provide information on Ebola to residents in Conakry, Guinea on April 11, 2014 at the start of the largest Ebola outbreak in history
CELLOU BINANI—AFP/Getty Images
By Alice Park

Given the fact that the Centers for Disease Control and Prevention (CDC) is now urging Americans to avoid non-essential travel to Sierra Leone, Liberia and Guinea, which are battling the largest outbreak of Ebola in history, and the Peace Corps has pulled out its volunteers from the region, the key to bringing the epidemic under control will rest not with the highly trained scientists flown in from around the world, but with local volunteers.

In outbreaks like this, which has so far claimed more than 720 lives, the only way to control the spread of disease is by ensuring that anyone who is infected is isolated in a hospital, and that anyone they contacted are also monitored for symptoms. “The main way we have of controlling the outbreak is by preventing further spread of cases,” says Dr. Eileen Farnon, associate professor of medicine at Temple University School of Medicine. “You have to take people who are symptomatic out of the community so they don’t continue to spread disease.”

MORE: Here’s What You Need to Know Now About the Ebola Crisis

In 2007, Farnon, then at the CDC, traveled to the Democratic Republic of Congo and Uganda to help those nations battle smaller Ebola outbreaks. Farnon helped local health officials coordinate contact tracing, which involves asking every infected patient for a list of people they had contact with since they started experiencing symptoms, and then finding and monitoring those contacts for 21 days. “As you can imagine, the more infected patients there are, the number of contacts really grows exponentially,” she says.

The follow-up required an army of volunteers to visit the contacts daily during the incubation period, often taking their temperature and asking them about any unusual health symptoms. If people started showing signs of illness, the volunteers were responsible for contacting a hot line and arranging for them to come to a hospital for further testing and possibly isolation if they were infected.

MORE: Everything You Need to Know About the Deadly Ebola Virus Outbreak

Such contact tracing is also occurring now in West Africa, but it’s likely more challenging because of the denser and more fluid nature of the populations there, says Farnon. In the Democratic Republic of Congo and Uganda, the outbreaks occurred in remote regions and the contacts weren’t mobile and potentially infecting others in densely populated places like airports.

Farnon guesses that if contacts in the current outbreak mention that they are intending on traveling to another country, the health workers will likely discourage them from doing so, but that some, if they aren’t feeling sick, may still continue with their trip. That’s why national health officials need to coordinate screenings at border crossings to ensure that people who become ill are identified and cared for before they can spread the virus.

MORE: Infographic: Ebola By the Numbers

Farnon says there are social challenges as well. “People in the community will realize early on that patients who get admitted to the hospital, usually late in their infection, may die. And many start getting fearful about going to the hospital because they think it means they are going to die,” she says. While there are no treatments for Ebola infection, early care with proper hydration and nutrition can keep patients strong enough to overcome the virus. But even patients who survive are stigmatized because their neighbors think they are still contagious. Farnon says her groups provided a volunteer to accompany patients back to their homes to help them and their community to understand that they were no longer a threat.

The volunteers were the key to keeping the virus contained, says Farnon, and contact tracing, while labor intensive, was the key to managing the outbreaks in which Farnon was involved—and certainly essential to the west African situation as well. “The village health workers and volunteers are the primary means of getting messages to communities, because they have the relationships with the communities and the ability to mobilize others to help people look for the signs and symptoms of Ebola,” says Farnon. 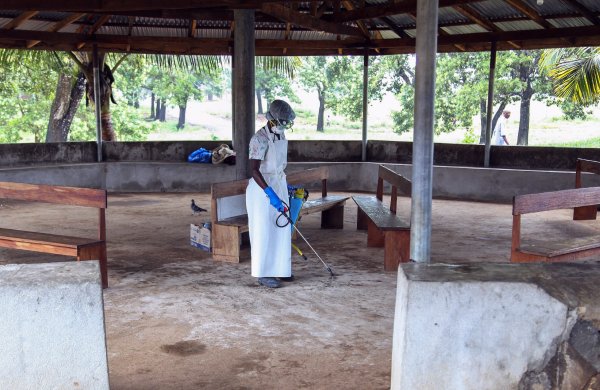 The Psychological Toll of Ebola in Sierra Leone
Next Up: Editor's Pick