But that’s where Michael Linares, a Spanish physicist and electrical engineer, has decided to focus his talents by creating an ice cream that changes color when you lick it, according to his local Spanish news site. Called Xamaleón, a play on the Spanish word for chameleon, the ice cream starts at a lavender color before it’s sprayed with what Linares calls a “love elixir.” Once you lick it, it turns magenta.

The dessert technology is patent pending, and details on how the “love elixir” blesses the ice cream with chameleonic powers are secret. (Some reports are saying the mysterious potion indeed has aphrodisiac properties.) Linares has disclosed to Gizmodo that the “love elixir,” originally his master’s thesis, is “entirely made with natural ingredients,” and that he’s also working on two variations: one that changes under UV lights at nightclubs, and another that’ll turn from pink to white all on its own.

The color changing ice cream is currently available at only his ice cream shop in Girona, Spain. 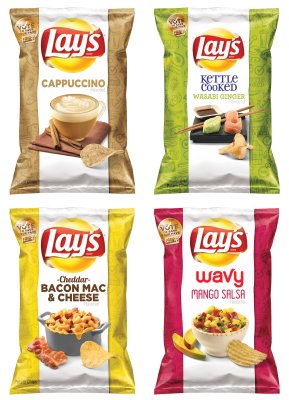 This Company Is Making Millions By Giving You 5 Fewer Chips Per Bag
Next Up: Editor's Pick