When Andrew Jarvis’ architecture firm opened up shop in New York in 2012 and the man began splitting his time between the city and his home in Philadelphia 49:51, respectively, he became haunted by a nightmare scenario. Since he rented an apartment in NYC, could the big bad New York Department of Revenue come after him to pay additional, steep taxes even though he lived in Pennsylvania? (Not an entirely implausible scenario.)

So Jarvis told TIME that he decided to fight off a hypothetical offensive by IRS auditors with “blizzards of receipts, Easy Pass records, train tickets” … and selfies. The old fashioned kind. At random intervals, Jarvis would program his camera —not camera phone — on an auto-timer, perch it on top of the post at the end of his driveway, put on a business-time face, and take a timestamped picture of himself standing in front of his home with the day’s Philadelphia Inquirer.

But when his social media savvy daughter Anne, 26, came across his camera Friday, the instantly viral InternalRevenueSelfies Instagram was born.

“I came across these photos and I literally had tears running down my cheeks, and I was on the floor laughing” she said. (Andrew had no idea what Instagram was prior to his celebrity.) Anne continued, “What’s so funny is how deadpan he is. He has such an earnest nature. I know where all of this is coming from is he’s just through and thorugh an honest stand-up guy and this is a manifestation of that.”

Andrew had no problem with Anne making the account — he thinks its popularity is proof that she has a good eye —although he doesn’t quite get the humor: “I just created a record as any citizen would do who is trying to be prudent… It’s kind of embarrassing.”

Some photos include props, like snow shovels for winter:

Umbrellas for the rainy season:

And phones when he simply doesn’t have time for all of this:

“I hate to admit this but I sometimes take pictures of myself pumping gas [to prove I’m the one using the credit card at that location],” Jarvis said. “I would have liked to have smiled in a few of the pictures had I known people were going to be looking at them.”

But that might be why the photos have caught on. “No one was ever meant to see these, these were for his future imaginary conversation he might have hypothetically with the IRS,” Anne, who has an eye for design and currently creates window displays at Anthropologie, said. “And seeing that no one was supposed to see them made me want to show the world.”

Jarvis has yet to be flagged by the IRS, but he worries that he might now be tempting his fate: “It’s almost taunting them.” Still, an audit does have a certain ring of appeal. “I kind of wouldn’t mind because I’ve gone through an awful lot of trouble to document it, it would be nice to share it with someone to prove I’ve done my work and have paid my taxes correctly.” 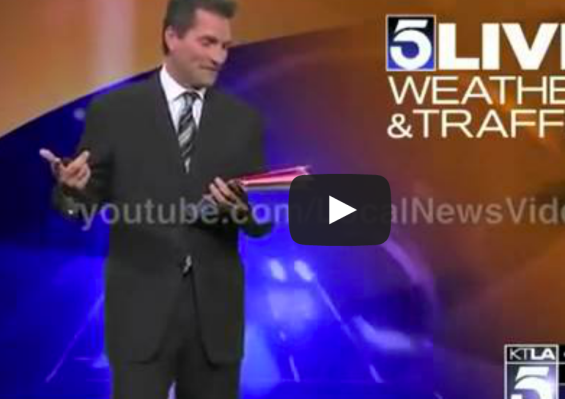 Watch This Weatherman Get Tricked Into Wishing 'Hugh Janus' a Happy Birthday on Live TV
Next Up: Editor's Pick