Palestinians collect human remains from a classroom inside a UN school in the Jabalia refugee camp after the area was hit by shelling on July 30, 2014.
Marco Longari—AFP/Getty Images
By Zeke J Miller

White House Press Secretary Josh Earnest has issued the Obama administration’s toughest critique yet of Israeli conduct in the ongoing conflict with Hamas in Gaza, saying Thursday that the Israeli shelling of a U.N. school-turned-shelter for Palestinian civilians was “totally indefensible.”

Addressing reporters, Earnest quoted U.N. Secretary General Ban Ki-moon that “all available evidence points to Israeli artillery as the cause” of the attack, which took place early Wednesday morning. At least 19 people died in the incident, according to the United Nations Relief and Works Agency, which ran the shelter. The shelling marked the sixth attack on a U.N. shelter during the ongoing conflict.

On Wednesday, National Security Council Spokesperson Bernadette Meehan said “the United States condemns the shelling of a UNRWA school in Gaza,” but did not single out Israel for responsibility. Earnest’s comments went further, noting that the U.S. government has no reason to doubt U.N. reports that Israel was behind the shelling.

“It does not appear there’s a lot of doubt about whose artillery was involved in this incident,” Earnest said.

“The shelling of a U.N. facility that is housing innocent civilians who are fleeing violence is totally unacceptable and totally indefensible,” Earnest said. “And it is clear that we need our allies in Israel to do more to live up to the high standards that they have set for themselves.”

Earnest said the incident should redouble efforts for an immediate humanitarian cease-fire, prospects for which slimmed Thursday as the Israeli military prepared to broaden its operations inside Gaza.

“The thoughts and prayers of the American people are with the families of those who have been lost in this terrible conflict,” Earnest added. “And what we are simply asking the Israelis to do, in fact urging the Israelis to do, is to do more to live up to the standards that they have set for their own military operations to protect the lives of innocent civilians.”

Caches of weapons have been found in at least three UNRWA schools over the course of the three-week conflict. In the most recent incident, the Israeli military said its forces took fire from the area around the school and returned fire.

“We also condemn those responsible for hiding weapons in United Nations facilities in Gaza,” Meehan said. “All of these actions, and similar ones earlier in the conflict, are inconsistent with the UN’s neutrality.” 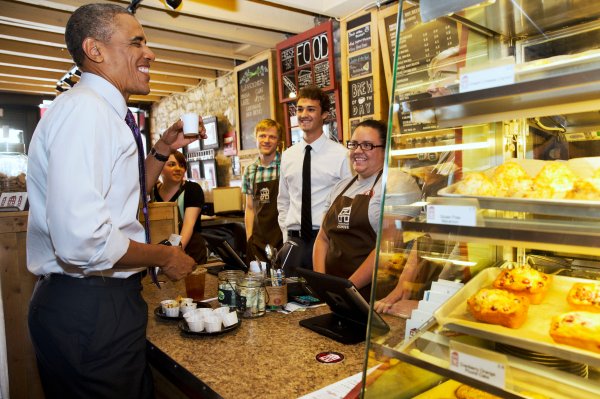 Obama Just Bought a Round For Everyone At This Coffee Shop
Next Up: Editor's Pick