A discussion hosted on Wednesday by the Family Research Council, a conservative Christian think tank, started as a searing critique of the Common Core, a set of reading and math standards for public school students that were originally adopted by 45 states and the District of Columbia, and ended with a not-so-subtle threat: any elected official who supports them will be punished.

“I submit to you that any politician—left or right, conservative or liberal, Republican or Democrat or libertarian—any politician who is not fighting [Common Core] is not fit for office,” said Emmett McGroarty, an executive director at the American Principles Project, a conservative advocacy organization. “This issue will be the most important litmus test” for voters in both the midterm elections and in the 2016 presidential race, he said—”and it’s not going to be pretty for a lot of Republican governors.”

The crowd chuckled in agreement.

In an era in which politicians are especially vulnerable to right-wing referendums and grassroots populism (see, “Cantor, Eric”), McGroarty’s message seems at first to pack some serious punch, except for one thing: conservative Christians—and conservatives in general—are hardly a unified voting bloc when it comes to the controversial issue of the Common Core.

Earlier this year, the National Hispanic Christian Leadership Conference, one of the biggest evangelical groups in the country, representing roughly 16 million voters and 40,000 churches, announced its support for Common Core on the grounds of “Biblical justice and equality.” Another wildly popular Christian politician, Mike Huckabee—otherwise a darling of the Family Research Council—has used his radio show to urge Republicans to back the standards, despite opposite from powerful groups like the American Association of Christian Schools.

“Parents and people involved in their local schools should let it be known that core standards are valuable, and they’re not something to be afraid of—they are something to embrace,” he said.

While Huckabee has drawn fire from right-wing pundits like Glenn Beck and Michelle Malkin, he has earned support from others in the Christian right, including some Catholic educators and evangelical pastors. Karen Swallow Prior, a professor at Liberty University, a conservative Christian institution, has been an outspoken proponent of Common Core, as has Nicole Baker Fulgham, the author of “Educating All God’s Children: What Christians Can – and Should – Do to Improve Public Education for Low-Income Kids.”

The bickering between conservative Christians on the Common Core underscores a larger civil war within both the Republican and Democratic parties that has, in past few months, catalyzed an explosion of unlikely alliances on both the right and left over this issue. Last month, after the American Federation of Teachers, one of the biggest teachers’ unions in the country, moved to distance itself from the Common Core, it found itself cheered by a handful of some of the most fiercely anti-union Tea Party groups in Washington. Freedom Works, the Heritage Foundation, as well as many potential Republican presidential nominees, including senators Marco Rubio, Rand Paul, Ted Cruz, Rick Perry and former Senator Rick Santorum, have all panned the standards.

Meanwhile, many traditional liberals—from labor activists to comedians like Louis C.K. and Jon Stewart—have come down against the standards, while organizations that have traditionally been in the GOP’s corner, including the U.S. Chamber of Commerce, the Business Roundtable, and the Thomas B. Fordham Institute, have fervently supported them. Other potential GOP presidential hopefuls, like Jeb Bush and Chris Christie, have also stood behind the initiative, despite increasing opposition from their base.

One reason for the schizophrenic nature of the debate is that while Common Core has become President Barack Obama’s signature educational policy in the last few years, it is born of a fundamentally conservative idea. For years, Republicans have demanded the implementation of the rigorous standards called for in President George W. Bush’s No Child Left Behind law, and complained that, without standards that allow for comparisons between states, a second grader in Missouri will not have the same skill sets as second graders in Kansas or Maine.

The Common Core was originally conceived and written by the National Governors Association and the Council of Chief State School Officers, with funding from several private philanthropies, including the Bill & Melinda Gates Foundation. The initiative is a set of voluntary educational benchmarks designed to standardize notions of “achievement” and “college readiness” between states; it is not a national curriculum. As conservatives have long demanded, the program leaves decisions about teaching methodology, textbooks, technology, and curriculum to states and local school boards.

After the Obama administration embraced the Common Core in 2009 and tied adoption of the standards to the disbursal of federal funds through the Race to the Top program, conservatives denounced the program as a federal government incursion into states rights. Tea Party groups have also objected to the fact that corporate philanthropies have actively supported the standards. They argue that the initiative amounts to, in the words of at least one presenter at the Family Research Council on Wednesday, “a corporate takeover of American schools.”

Meanwhile, liberal activists and teachers unions generally object to the Common Core on the grounds that new standardized tests, designed to measure students’ grasp of Common Core concepts, will be linked to teachers’ performance evaluations and salaries, as well as to whether students are allowed to advance to the next grade level. They argue that teachers and students who do not perform well on the new tests will be unfairly penalized.

This opposition, from both the right and left, has led to several states, including Indiana, Oklahoma, South Carolina and North Carolina, to pull support for the Common Core. Two years ago, Louisiana Governor Bobby Jindal said the program “will raise expectations for every child”; this year, he compared it to centralized planning in the Soviet Union and moved to repeal the program. Wisconsin Governor Scott Walker has also called for repeal.

For most of the states that have adopted the Common Core, this school year will mark the first time students and teachers will use their states’ new curriculum. The battle among conservative Christians, as well as conservative, liberals, and parents of every stripe promises to heat up next month. 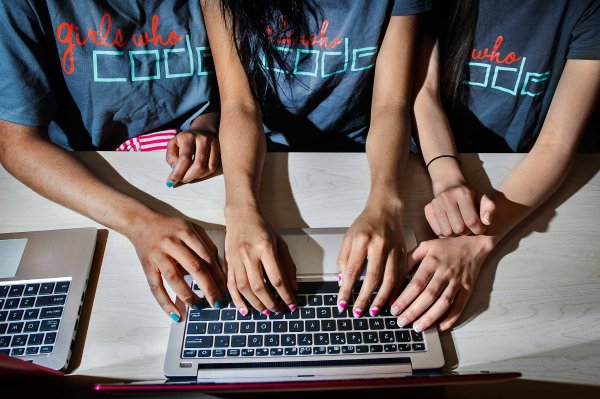 Cracking the Girl Code: How to End the Tech Gender Gap
Next Up: Editor's Pick