Netanyahu: Gaza Fight Will Continue Until Tunnels Are Destroyed

IDF soldiers of the Paratroopers Brigade guarding and neutralizing tunnels that were dug by the Hamas organization and leading into Israel, Khan Younis, Gaza, July 30, 2014.
Ziv Koren—Polaris
By Noah Rayman

Israeli Prime Minister Benjamin Netanyahu pledged Thursday to continue his country’s offensive against Palestinian militants in Gaza until tunnels facilitating attacks on Israel were destroyed, defying peace efforts and potentially extending the three-week war for at least several more days, if not longer.

“We are determined to complete this mission, with or without a cease-fire,” Netanyahu said in televised remarks ahead of a government meeting in Tel Aviv on Thursday, according to Reuters. “I won’t agree to any proposal that will not enable the Israeli military to finish this important task, for the sake of Israel’s security.”

The Israeli military also called up 16,000 more reservists, a move that an unnamed military official told Reuters was done to relieve some of the tens of thousands of other reservists already called up.

At least 1,372 Palestinians, most of them civilians, in Gaza—and 56 Israeli soldiers and three civilians—have been killed since Israel launched “Operation Protective Edge” on July 8 in response to rocket fire from Gaza. Netanyahu’s security cabinet approved continuing operations to destroy the network of tunnels in Gaza on Wednesday amid international efforts to reach a cease-fire. 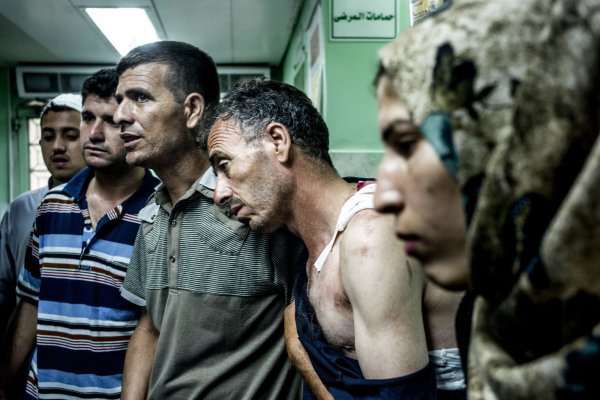 A U.N. School Is No Refuge as the War Worsens in Gaza
Next Up: Editor's Pick