I consider Billionaires who fund candidates and super PACs to be great patriots since they’re using their money altruistically to try to improve our country, if only by preventing every TV ad from being one for Verizon. But I got nervous about money’s corruption of our political system when I noticed that several people in local L.A. elections had given equally to both candidates. When people are giving money that cancels itself out just to be assured they’re on the winning side, that’s when it stops being democracy and starts being venture capital.

Using public records, I built an algorithm that created a spreadsheet showing that about 160 Americans donated to candidates for the Senate or the House who are running against each other from different parties this November. When I say I, I mean Pratheek Rebala, a really smart intern in TIME’s Washington news bureau, and when I say spreadsheet I mean a list of numbers that may or may not actually be a spreadsheet, and when I say algorithm, I have no idea what I mean whatsoever. I am relatively confident about all the other words I am using.

I picked eight of the most interesting double donors, scoured the web for contact information and sent them emails asking them to explain their motives. None responded. This is where a lazy, uncreative reporter would just give up. When Washington bureau chief Michael Scherer discovered that I had given up, however, he got two interns to actually call everyone on the list. Tessa Berenson and Becca Stanek may not have learned a lot about journalism from this assignment, but if they ever need telemarketing jobs, they are going to be well prepared.

Tessa and Becca got two double donors to speak on the record, which proves both that people are indeed hiding something and also that you should not apply for an internship at TIME.

David Austin, a Texas lobbyist with clients such as the county of El Paso and the World Wildlife Fund, gave $500 to both Republican Senator John Cornyn and Democrat Maxey Scherr, who later lost her primary. He figures the money may have been the price of admission to fundraising parties, which he goes to a lot of to talk to lawmakers about how nice El Paso and pandas are, neither of which is true.

“I try to put my personal politics aside and decide if this is somebody who is going to be in a position to help us with our issues,” says Austin, a Democrat. He didn’t think Scherr would win, but she’s a friend and he wanted to let her know he believed in her. I would have thought that candidates would get angry when they found out you also donated to their opponent, but apparently they just are excited about money. Money in politics is less like giving a diamond ring and more like texting a little thumbs-up emoticon.

Some people explained, off the record, that they gave to both candidates because they’re friends with both of them, which seemed suspicious since recent polls show that approximately 0% of Democrats and Republicans are friends. Even more unbelievable, California lobbyist Jerry Haleva gave to Sacramento County’s new Democratic Representative Ami Bera and his Republican challenger Doug Ose–even though he’s on Ose’s finance committee. This is like playing for the Yankees and giving a couple of runs to whatever team is playing the Yankees, which I believe sometimes happens around the trade deadline.

But Haleva says he double-donated because he likes both candidates’ pro-Israel policies. “I just wanted to show Bera that I supported and appreciated what he was doing in foreign policy,” he explained. In essence, Haleva is giving money to an issue, not a candidate. I hadn’t seen money used as such a complex communication tool since Flo Rida gave me a stack of $1 bills to make it rain at the Diamonds Cabaret strip club in Miami, where I used some to say “Boobs!” and others to say “Butts!”

Politics, as I’ve always suspected, is both confusing and boring. Because of that, candidates need to spend a lot of money to get us to vaguely remember their names, whereas the performers at Diamonds Cabaret do not. Donations, even when they cancel each other out, are given to advance the plans of people who believe they’re making the country better, or at least their companies, many of which they think are also making the country better. What I discovered is that the hardest part of getting rid of money in politics is not how insidious the donors are but how much of it often comes from good intentions. Which is almost always where the problems begin. Just ask the TIME interns. 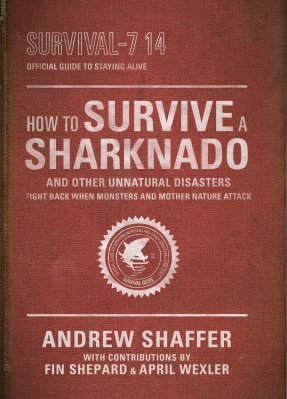 5 Things Deadlier Than a Sharknado — and How to Survive Them
Next Up: Editor's Pick