Cracking the Girl Code: How to End the Tech Gender Gap

Twenty high school girls sit hunched in front of laptops around a polished wooden table at AT&T’s midtown office in New York City. Riya Satara, 17, types a series of ones and zeros to adjust a paddleball game she’s designing so that the ball follows the right trajectory. It’s only her first week learning to code — writing the instructions that tell a computer what to do — but by the end of a seven-week summer stint with Girls Who Code, a national nonprofit that seeks to close the gender gap in the tech industry, Satara and her camp mates will be designing algorithms that do everything from locate public restrooms to detect false positives in breast-cancer testing.

This camp is just one of a half-dozen similar programs around the country — many of which are supported by tech giants like Google, Facebook and AT&T — that offer coding classes developed specifically for girls like Satara who have shied away from the subject. “I’m about to be the president of my school,” says Satara, who hopes to become a neurosurgeon. “I can stand on a stage in front of 700 kids, but I was too scared to take a computer-science class where I would have been the only girl in a room of 19 guys.”

Changing that kind of mind-set is a national strategic challenge. By 2020, U.S. universities will not be able to fill even a third of the country’s 1.4 million computing positions with qualified graduates. The industry needs to tap the other 50% of the population if it hopes to find candidates for crucial jobs. At present, only 12% of computer-science degrees go to women. “Our motto,” says Reshma Saujani, who founded Girls Who Code, “is infiltrate, infiltrate, infiltrate.”

Since it launched in 2012, Saujani’s program has gone from 20 girls in one classroom to graduating 3,000 girls from clubs and camps across the country. Saujani says 95% of graduates want to major in computer science in college.

These future female developers are valuable to tech companies in ways beyond simply filling open spots. Most Internet purchases are made by women, and understanding their instincts is a key to business success. “We’re falling behind the rest of the world if we don’t teach our girls how to code,” says Megan Smith, VP of Google X, a semisecret facility at Google in California working on advanced technology. In June, after revealing that only 17% of its engineers were women, Google launched a site called Made With Code that features free programming projects for girls. The company pledged $50 million to programs like Girls Who Code.

Money is only part of the answer. Educators are trying to understand how to engage girls in computer science early and why so few of them stick with it — even though they outpace boys in most other subjects. “If a woman is taking an engineering course, she’s likely to drop out if her grade goes below a B-plus,” says Ashley Gavin, who creates the curriculum for Girls Who Code. “A guy won’t drop out unless his grade goes below a B-minus.”

That dynamic explains why some academics have made it their mission to change the tone of introductory computer-science classes so that young women don’t drop out. “At many institutions they are weed-out courses,” says Maria Klawe, president of Harvey Mudd College in Claremont, Calif. “Professors should be saying, ‘We’re thrilled to have you here and know you can succeed.'” Klawe has boosted the percentage of women graduating with computer-science majors at her college from 10% to about 40% in seven years.

Klawe implemented some of the strategies that Girls Who Code now emulates: both programs emphasize problem-solving real-world issues because girls tend to want to help their communities. The programs also assign group projects because research shows that girls flourish when they collaborate with others. Many high school programs have also opted for a single-sex approach to help girls build a network they can lean on as they enter a male-dominated workforce. But with so few high-profile female programmers as role models, many girls still have a hard time envisioning themselves in the field.

That’s why Google is touting female coders. At the June launch of Made With Code in New York City, alumni from Girls Who Code and Black Girls Code cheered on women like Miral Kotb, founder of iLuminate — a Broadway dance troupe that uses coding to choreograph the lights on their costumes — and Pixar’s Danielle Feinberg, who used code to animate Brave.

But gender parity won’t likely be reached until coding is better integrated into the classroom: currently 9 out of 10 schools in the U.S. don’t offer computer science. Code.org, a nonprofit backed by Mark Zuckerberg, Bill Gates and Google, aims to change that by mimicking China, Vietnam and the U.K., where coding classes are offered as early as elementary school and the gender gap is negligible.

Some developers aren’t waiting for U.S. schools to catch up. Consider Hopscotch, an app that teaches children as young as 8 how to build their own games with code. Hopscotch CEO Jocelyn Leavitt says her male friends taught themselves programming when they were kids by playing sports- or war-themed video games and then re-creating them. “We wanted to tap into that desire to create something but make it more accessible to both boys and girls,” she says. So far it’s a hit: more than 1.5 million projects have been coded with Hopscotch in the past year, about half by girls.

Riya Satara says if she’d learned coding earlier, she wouldn’t have thought it was just for boys. Now she wants to spread the tech gospel by starting a Girls Who Code club at her school. And she’s finally enrolling in a computer-science class.

At the advanced level.

YOU CAN SEE MORE SOLUTIONS HERE 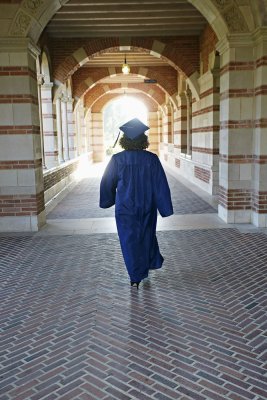 These 5 States Have the Best Colleges
Next Up: Editor's Pick