Even the creator of the Manic Pixie Dream Girl wants her to go away. The movie archetype, as first defined by Nathan Rabin in a 2007 A.V. Club piece about the film Elizabethtown, “exists solely in the fevered imaginations of sensitive writer-directors to teach broodingly soulful young men to embrace life and its infinite mysteries and adventures.” Though the MPDG has had a long reign as one of moviedom’s favorite female types, alongside the “Damsel in Distress” and the “Strong Female Character,” Rabin made news this month by apologizing, in Salon, for ever inventing the phrase in the first place. The concept, he wrote, had been diluted as it became more popular, becoming a cliché about any slightly quirky woman and losing its critical power.

But, with apologies to Rabin, who also decries the permutations of Manic Pixie Something or Other that have proliferated in his creation’s wake, there’s perhaps another reason for the term to go away: the Dream Girl’s place in the zeitgeist has been taken over by the Hot Mess.

Exhibit A: Anna Kendrick’s starring role in Happy Christmas, the new Joe Swanberg movie arriving in theaters Aug. 1. (It’s also available on VOD.) Kendrick plays Jenny, a young woman who moves in with her brother and sister-in-law and their baby after a bad breakup; though her life is pretty much falling apart — she sleeps in the basement, is an unreliable babysitter and gets so wasted that she’s essentially another child in the house — having her there isn’t all bad for her hosts. She’s got that young, unhinged energy that they seem to have lost.

So, at least at first, Jenny has the hallmarks of someone who might be lumped under the MPDG umbrella by those overusing the term. She’s pretty; she’s quirky; she shows up suddenly and helps people out.

Except that’s not the only thing she does. For one thing, though “pixie” types — Natalie Portman in Garden State for example — can have their own problems, their movies aren’t really about their problems. Their problems are, rather, charming accoutrements. In Happy Christmas, however, Jenny’s problems are solid. They’re actually dangerous, to herself and others — this is way beyond Cute Clumsy Girl territory — and they’re things you might actually worry about if you had a screw-up sister. She may be sweet, but her sweetness isn’t enough to make her a good house guest. Still, she’s not a traditional Damsel in Distress. Though she does need help, she doesn’t need to be rescued, at least not by another person. As Rabin points out in his Salon essay, the Manic Pixie Dream Girl trope “is a fundamentally sexist one”: the MPDG exists only in relation to the (male) lead. As soon as the character becomes the lead herself, as soon as her problems really matter, she’s out. Furthermore, the person who’s really helped by Jenny in Happy Christmas is her sister-in-law, not her love interest; even her use as a foil for another character is sisterly, not sexist.

And who else appears in Happy Christmas? Lena Dunham. Though Dunham’s character — a friend of Jenny’s — is actually pretty put together, the actress and writer can get a lot of credit for making young women with messy lives a subject of pop-culture fascination. That messiness is the focus of Girls, a show that exposes the ways in which even the most “with-it” person is inevitably hiding a crack underneath her veneer. The women on Girls don’t float down to use their quirkiness to help dudes out, because they need all their energy to help themselves. (If anything, the guys on the show, Adam especially, are the ones who use their weirdness in mystical, healing ways.)

So messiness is having a moment. In April, Katy Steinmetz explained for TIME how “hot mess,” A phrase now associated with Amy Schumer and her Comedy Central show, has come to denote someone who is “in obvious disarray” and yet remains attractive, a meaning that’s been in use for only about 10 years. Inside Amy Schumer and Girls are very different shows, but both have made it clear that audiences are eager for a type of female character who’s neither magical nor in need of rescuing nor heroically strong. (Schumer’s persona, however, isn’t exactly “manic pixie” anything — she remains attractive despite her disorder, but her attractiveness isn’t usually of the indie-twee-offbeat variety, which is what differentiates the protagonists of Happy Christmas and Girls from your garden-variety hot mess.)

Even New Girl, despite the fact that its star Zooey Deschanel is often held up as a Manic Pixie Dream Girl exemplar, fits the bill: protagonist Jess drops into the lives of four men and adds a touch of fun, but she’s got problems and back story of her own, as well as the focus of the show’s creators. Just as Deschanel has made sure that her real-life detractors know that the bit of pixie in her personality doesn’t mean they can’t take her seriously, New Girl is best when Jess is messing things up and capable of getting herself together, all at once. That balancing act is true of all the best examples of the trope: the woman in question often has an Anthropologie-inflected, Brooklyn-in-quotes appeal that lots of real-life women strive for, she’s struggling to figure things out, she wouldn’t say no to a hand but in the end she’ll probably figure it out on her own.

There are hints that the type is sticking around. Happy Christmas was preceded by the prime example that was Obvious Child, and this fall’s Laggies — which stars Keira Knightley as a woman struggling so much with growing up that she tries to pass herself off as a teenager — looks to continue the trend. And it’s notable that even shows like New Girl, which don’t strive for the grittiness of Swanberg’s films, are giving their female leads such imperfections. Because “messy,” of course, can also be shorthand for “real.” So, if the Manic Pixie Dream Girl’s creator wants the world to stop using that formula, here’s another way to sum up the archetype in question: human. 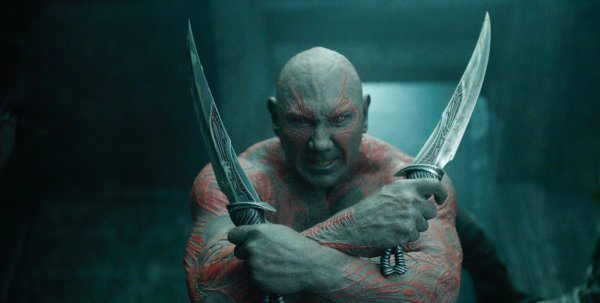 See Guardians of the Galaxy's Most Amazing Makeup Transformations
Next Up: Editor's Pick