Lawyers for former Virginia Governor Bob McDonnell and his wife, Maureen, argued Tuesday that the couple didn’t conspire to take over $165,000 in cash, shopping trips, and vacations from a wealthy donor, but instead only accepted the gifts because Mrs. McDonnell had a “crush” on the donor.

McDonnell, who left office in January, is accused of taking cash and gifts from Jonnie R. Williams Sr. in return for help promoting his dietary supplement company. But the couple’s lawyers are arguing that the Maureen McDonnell let Williams pay for expensive shopping trips and vacations because she had a “crush” on the charismatic businessman, and was unhappy in her marriage to the Governor. “Unlike the other man in her life, Jonnie Williams paid attention to Maureen McDonnell,” her defense attorney William Burck said. The couple face over 20 years in prison if convicted on federal corruption charges.

But will a jury believe the “crush” defense? Some lawyers think they just might.

“I think it’s ingenious, and I think it may work,” says Solomon L. Wisenberg, a D.C. based white collar defense lawyer who served as deputy independent counsel to Kenneth Starr during the Whitewater-Lewinsky investigations. “It certainly doesn’t make either one of them look good, but that’s not the same thing as committing a crime.”

Wisenberg notes that the McDonnells had filed a motion to sever, which would have allowed the co-defendants to face separate charges, but that this motion was denied, which means they had to coordinate their defense arguments. “This allows them to have kind of a complementary defense without pointing fingers at each other, yet it helps him because she’s obviously the principle player, and she’s the first one who roped this guy in,” he says.

“This strikes me as a more atypical defense, but that doesn’t mean it’s a Hail Mary pass,” says Josh Bowers, a professor at University of Virginia Law School who specializes in criminal procedure. “It could very well be the truth, and sometimes the truth is stranger than fiction.”

But is Maureen McDonnell falling on her sword to protect her husband? “She’s got a lot less room to maneuver than he does,” Wisenberg explains. Mrs. McDonnell would have frequent private meetings with Williams, one former staff member called him her “favorite playmate,” and the two allegedly exchanged over 1,200 texts and phone calls over two years. “What’s she gonna do, say ‘It’s all my husband?’ The facts don’t seem to support that. What are her options other than what she’s doing?” he adds. The defense team also argued that Mrs. McDonnell was never a public official, and so shouldn’t be held to the same standards as her husband.

Wisenberg also notes that it might have been a misstep for the prosecution to start off with testimony from the McDonnell’s daughter Cailin, whose wedding was partially funded through gifts from Williams. Cailin McDonnell Young cried on the stand when she testified Tuesday that Williams had footed the bill for the catering at her 2011 nupitals. Wisenberg says Cailin’s tears on the witness stand could bode well for the defense, since a crying young woman makes the prosecution look like bullies, especially since juries are more likely to remember what happens at the beginning and end of the trial. “She’s an attractive young female testifying about the wedding, asking for Kleenex,” he says. “If I’m on the defense, I’m doing high-fives under the table.” 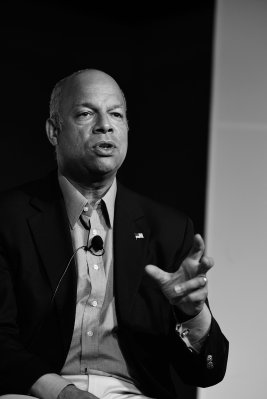 What I Saw at the Border
Next Up: Editor's Pick