Want to See a Live Dinosaur? Set Up a Bird Feeder

When the theory first arose that birds evolved directly from dinosaurs, it was enormously controversial. It was even more contentious when some paleontologists argued that birds are dinosaurs—the only branch of the family that survived a cataclysmic asteroid strike 65 million years ago.

That initial controversy has largely vanished, thanks to a series of astonishing discoveries over the past 20 years or so—for example, that many dinosaur species sported feathers, and that the bone structures of birds and dinos are similar in all sorts of ways. “We now know birds are a subgroup of dinosaurs, like humans are a subgroup of apes,” says paleontologist Michael Lee, of the South Australian Museum, in Adelaide.

Now a new report in Science by Lee and several colleagues has laid out in unprecedented detail the exact bird branch of the dinosaur tree that sprouted and evolved over some 50 million years—and how that evolution may have saved birds from extinction when the asteroid struck.

The study is based on a cross-species analysis of more than 1,500 anatomical features across 120 species of early birds and therapod dinosaurs—the branch that includes velociraptors and T. Rex, and which is most closely related to birds. Of all the evolutionary changes that reshaped the bird lineage, says Michael Benton, a paleontologist at the University of Bristol in the UK, writing in a commentary on the new paper that also appears in Science, “The key seems to be miniaturization.”

Starting about 200 million years ago, the paper shows, one group of therapods began to shrink rapidly, from an average weight of more than 350 lb. to less than two. Not only that, says Lee, but, “It turns out that birds and their direct ancestors evolved about four times faster than other dinosaurs over that time.”

It’s not unusual to see different rates of evolution in related species, he says. “Rodents are the most successful mammals by far, for example,” Lee says, “and one reason is that they have the most rapidly evolving DNA.” Rapid evolution could be one reason there are now 10,000 species of birds, but only a few dozen species of crocodiles, even though both are equally ancient.

Shrinkage isn’t the only change that transformed therapods into birds, says Benton. “There was miniaturization, but also modifications to the eyes, the elaboration of feathers, the development of wings out of the small, silly-looking forelimbs therapods have.”

These changes might have been driven by their helpfulness in letting birds adapt to living in trees—previously uninhabited ecological niche. It’s still just a hypothesis, says Benton, but “there might have been an opportunity to conquer a new habitat by getting smaller, developing the ability to climb and to glide, developing better vision so you don’t go banging into branches.”

The changes could also have given birds a huge advantage over other dinosaurs when the asteroid finally struck. “Birds obviously didn’t evolve knowing in advance that it would hit,” says Lee, “but the adaptations might have incidentally helped them survive—they could warm themselves with feathers [when dust from the asteroid cooled the Earth], fly long distances for food.”

What most people don’t realize, says Lee, is that birds didn’t show up just as the other dinosaurs were dying out. “They shared the world for 100 million years.” The quintessential proto-bird, Archaeopteryx, lived 150 million years ago, he points out. But the terrifying T. Rex wouldn’t show up until many tens of millions of years later. 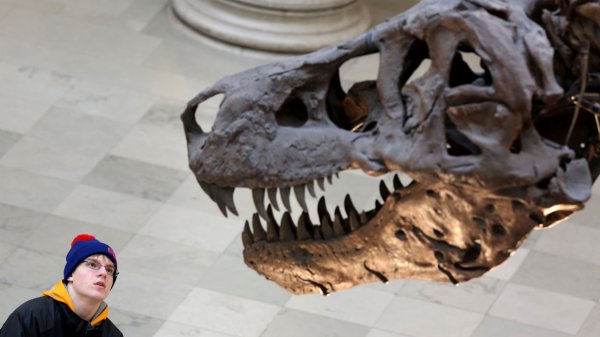 What Truly Killed Off the Dinosaurs?
Next Up: Editor's Pick