A civil-defense member looks for survivors at a site hit by what activists said were two barrel bombs dropped by forces loyal to Syria's President Bashar Assad in the Syrian city of Aleppo on July 27, 2014
Hamid Khatib—Reuters
By Per Liljas

The Syrian government has increased its use of barrel bombs since the U.N. passed a resolution on Feb. 22 ordering all parties to the conflict in Syria to end this and other indiscriminate use of weapons on civilians, Human Rights Watch (HRW) claims. The rights group now calls on the U.N. Security Council to take immediate action as it meets on Wednesday for its fifth round of reports on the resolution.

“Month after month, the Security Council has sat idly by as the government defied its demands with new barrel-bomb attacks on Syrian civilians,” HRW’s Middle East and North Africa director Sarah Leah Whitson said in a statement. “Russia and China need to allow the Security Council to show the same resolve and unanimity it brought to the issue of humanitarian aid to call a halt to these deadly attacks on civilians.”

Barrel bombs are large oil drums, gas cylinders or other containers filled with explosives and scrap metal, which are released from helicopters. On detonation, they tend to create more substantial destruction of buildings than other types of air strikes and artillery fire. The use of barrel bombs in Syria picked up in December last year, when over 500 people were killed by the devices in Aleppo.

HRW has documented over 650 new damage sites consistent with barrel-bomb impacts in Aleppo neighborhoods held by groups fighting the Syrian government in the 140 days since the U.N. resolution was enacted — 270 more sites than what was documented in the preceding 113 days. Now the group urges the Security Council to impose an arms embargo on all groups implicated in widespread or systematic human-rights abuses, as well as sanctions against individuals implicated in these violations.

They especially call attention to the obstruction of Security Council action by Russia and China, which in May also vetoed a resolution to refer the Syrian conflict to the International Criminal Court in the Hague.

“Barrel bombs, car bombs, and indiscriminate mortar fire are killing thousands of Syrians — many times the number of those who lost their lives in chemical-weapon attacks,” said Whitson. “What will it take to get Russia and China to allow the Security Council to enforce its own words, and take real steps to address these unlawful attacks?” 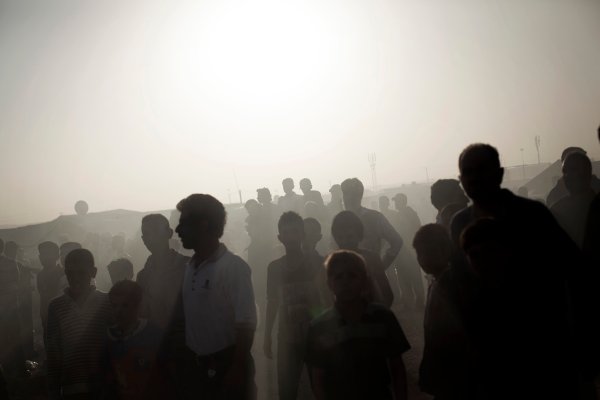 Cancer Wages Its Own War Against Syrian Refugees
Next Up: Editor's Pick