A Libyan girl stands next to the wreckage of a government MiG warplane that crashed during clashes in Benghazi, Libya, on July 29, 2014
Esam Al-Fetori —Reuters
By David Stout

A special force’s base in Benghazi has fallen after a coalition of rebel militias and Islamist militants pounded the enclave with salvos of rocket fire and artillery.

“We have withdrawn from the army base after heavy shelling,” Libyan Saiqa Special Forces officer Fadel al-Hassi told Reuters.

Benghazi, Libya’s second largest city, has been home to fierce fighting between government special-forces troops and former rebel fighters from the Benghazi Shura Council who are now allied with the Islamist force Ansar al-Sharia, according to Reuters.

Since the ousting of former strongman Muammar Gaddafi, the country has gone through periods of perennial chaos, as the militias who overthrew the regime have refused to give up their arms and Islamic groups have steadily grown more powerful.

Earlier this month, heavy fighting among rebel bands near the capital resulted in the closure of Tripoli International Airport after rockets crashed into the facility, killing one person and damaging at least a dozen planes.

Late last week, the U.S. embassy in the capital was evacuated and shuttered amid the increasing unrest. Over the weekend, the U.S. State Department issued an official travel advisory, warning American citizens to avoid any trips to the conflict-riven country.

“The Libyan government has not been able to adequately build its military and police forces and improve security following the 2011 revolution,” read the notice. “Many military-grade weapons remain in the hands of private individuals, including antiaircraft weapons that may be used against civilian aviation.” 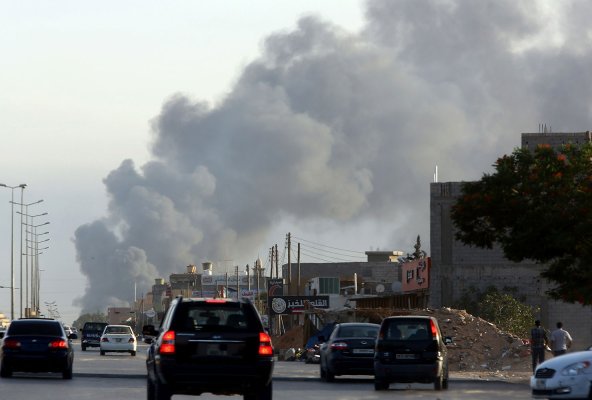