Tara Reid as April Wexler in Sharknado 2: The Second One.
Jaimie Trueblood—Syfy
By Sam Lansky

Tara Reid did not expect Sharknado to be her big comeback, but she’s learned better than to try to predict when opportunity will knock. She is 38 years old now and she has, as she often says, been working her entire life. Though she is lean and striking, there’s something a little bit brittle about her. She’s gone crinkly at the eyes, but her teeth are still gleaming, movie-star white.

She believes that her time is coming back around — or, at least, she hopes so. “I think people are saying, ‘This girl has lasting power. She’s been in this business since she was 6 years old,'” Reid says. “I’ve done over 45 movies. Regardless if they’re A movies, B movies, C movies, D movies. I always stay working. I love what I do.”

A beat. “Would I love to be doing it with Brad Pitt?” she asks. “Yes. Who wouldn’t? Maybe one day I’ll be lucky enough for that to happen, but if it doesn’t, I’m still doing the job I love, and I still make a good living.”

It’s March, and we’re in a midtown Manhattan hotel, where she orders tea and sits cross-legged on a sofa. She is in production on a new film, Sharknado 2: The Second One, the sequel to the 2013 B-movie about, as the title suggests, a freak tornado carrying man-eating sharks that ravages Los Angeles. The first Sharknado became an unexpected viral hit and instant camp classic, creating a self-conscious media furor; it was Reid’s first buzzy role after nearly a decade of straight-to-video horror flicks and bawdy comedies. (Her lone major-studio release in recent years was 2012’s American Reunion, the fourth American Pie film, which saw her reprising her role from the original sex comedy that helped make her a star.) But the success of Sharknado has given her a new sense of purpose, and she is excited for the world to see the second installment, which takes place in New York and, she says, is even more entertaining than the first.

“Sharknado was a fun, silly movie that we made — we knew it was ridiculous. The second one is still ridiculous. But this one has a heart,” she says earnestly. “It’s not like I did Titanic, or I’m up for an Academy Award. In that way, it did nothing for my career. It certainly showed the popularity in the fans that I have. Throughout the years I’ve lost the credibility of how much I did have, with things that weren’t always in my favor.”

She’s talking about her reputation as a party girl in the tabloids, which precedes even the TMZ era. “I was the first one,” she says. “I was before Paris Hilton, before Lindsay Lohan. I’m the oldest one, and I started selling their magazines. They still want to make me that. The magazines aren’t even letting me grow up, and that’s what’s hurting me with the character roles. They need to let me be the woman I am now, not the girl. There’s a big difference.”

But her public persona is indelible now, after so many years of being trailed by the paparazzi. At the peak of her popularity, riding her sex symbol status in the wake of a string of successful films (most notably, American Pie, but also Cruel Intentions and Josie and the Pussycats), Reid was at every event, every nightclub, alongside the turn-of-the-millennium celebutantes who grabbed headlines every time they stepped outside.

A withering 2003 profile of Paris Hilton in Rolling Stone featured Tara Reid as a peripheral cast member, partying with Hilton at a Los Angeles nightclub. (Reid is shrieking into her phone: “Tell him if he doesn’t get here in five minutes, I’m going to fuck him up personally!”) Reid used her party-girl image to snag an E! reality show called Taradise, which followed her around the world as she visited global party spots, drinking to excess with the locals.

“If I was staying home and I’m not gonna get the meetings anyway, then what’s gonna happen?” Reid says of her past. “You feel like you’re in jail. You’re not going to get the parts. You’re trying to be on your best behavior and no one respects it. So you might as well just travel the world, meet new people, have fun. I can get hit by a bus, or fall on ice and die. At least I can say I’ve lived a really full life. I could have changed a couple things, but that’s part of growing up. You don’t learn if you don’t make mistakes. And I’ve made many mistakes.”

By 2006, the tides had turned. Taradise had been canceled. The state of affairs back then is summed up nicely by a paparazzi video from 2006 that shows Reid waiting in line to enter the Hollywood hotspot Hyde, being told the club is at capacity. Moments later, Paris Hilton — gazelle-like, her Chanel necklace glinting — enters the club, a pre-contouring Kim Kardashian in tow. Hilton shoots Reid a haughty smile, and Kardashian sucks her teeth as they breeze past her. But Reid keeps waiting, anxiously toying with her T-Mobile Sidekick, fuming and fidgety.

Nearly a decade later, while Kardashian and Hilton never entirely transcended their dubious origins, they’re both still wildly successful businesswomen — Kardashian can snag the cover of Vogue, while Hilton is the face of a global empire that includes everything from fragrances to hotels — whereas Reid never managed to evolve fully, feeding the headlines with a string of public mishaps. There was that most infamous wardrobe malfunction, which left her standing on a red carpet with her left entire breast exposed, grinning obliviously. A series of low-budget films followed. There were more public embarrassments still: an incident in Saint-Tropez when she stumbled into a parked motorbike and knocked it over; an accidental shopping-cart theft; an impenetrably strange friendship with the British twin-brother pop duo Jedward; photos of botched plastic surgery; a Twitter persona that must be seen to be believed.

But when asked about all of this, she demurs. Though the evidence is damning, in fairness, it is true that unlike Lindsay Lohan, Reid’s nocturnal activities never seem to have interfered with her ability to behave professionally on set — but rather, to get credible work in the first place.

“I feel like a cartoon,” Reid says. “Because that’s what sells. Let’s write a bad story about Tara. Let’s show her drunk. Let’s show a party girl. Let’s show the worst situations. They see me on the red carpet looking beautiful, they see me at charities looking great, they see me doing stuff all the time — but it’s never written about. They still talk about stories from 10 years ago, my dress falling down or something ridiculous.”

She looks pained. “That’s so old. It’s not even funny. Stop. Why are you still talking about that? So many girls have made so many more mistakes. I never got in trouble. I never got a DUI. I’ve never been to jail. And yet I’m the bad girl?”

“Over the years, I’ve built a reputation that isn’t what a movie star is supposed to be like — the way the American media portrays it,” she continues. “They made a character of me that’s not even true. There’s a whole side of me that no one gets. No one knows that side about me, but nobody wants to know that side of me. Even if they do know about it, no one wants to write about it. So I’m lucky that I’m doing Sharknado right now. Do I know I have the capacity of doing more? Of course. But will I get the chance? It’s not up to me. It’s someone that’s gonna believe in me and say yes.”

In fact, talking to her in person, it’s not hard to imagine Reid tackling the types of character roles that often go to actresses like Melissa Leo and Dale Dickey — tough, weathered women, down on their luck. “It’s not that I can’t do them,” she says of more serious movies. “The studio says no. If I got the opportunity to do them, I can deliver.”

And as fun as it is to be in a movie like Sharknado, she insists she’s ready for a real challenge. “Right now, I’m not getting chances like that. Which is unfortunate.”

She sighs. “Actresses can’t hire themselves.” 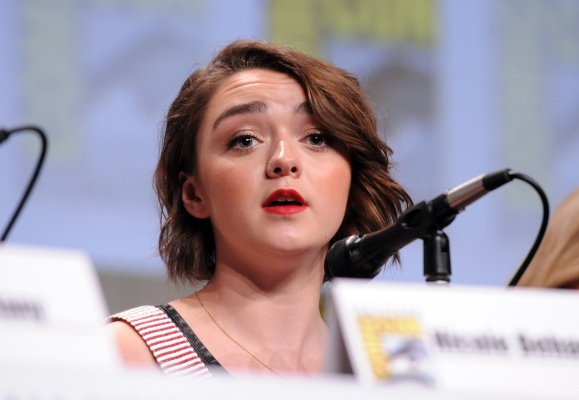 Game of Thrones: Maisie Williams Proves Herself an Expert Troll
Next Up: Editor's Pick