Nick or Josh? Nick or Josh? Welcome to the finale of The Bachelorette, where Andi Dorfman must choose which of the two eligible bachelors will become her life partner. There’s Nick, the crazy-eyed stallion with the supposed heart of gold who makes Andi feel his passion for her and accent scarves. Then there’s Josh, the former pro baseball player who never misses a chance to flash his extremely white teeth, bulky biceps or his feelings for Andi. We’ve made our choice. But whom will Andi choose? As we join Chris Harrison in the studio, he informs us that the man Andi didn’t choose is not over her and has been trying to see her, and she has repeatedly turned him down. Sounds like fun to watch for the whole family.

Here’s what happened on the finale of The Bachelorette:

Nick Meets the Family: Nick is so nervous to meet Andi’s family that he is sweating all over the veranda. Her mother makes sure that Nick and the viewing audience knows Andi worked her way through law school. Nick spends all his time telling Mama Dorfman that he loves Andi. He says the L word about 20 times and until her mother begs for mercy. Then Nick turns his attention to Andi’s father Hy and asks for his blessing to marry his daughter. He pauses and tells Nick that in his family, commitment is for life and then shrugs and says sure, later interviewing that he would be O.K. with having Nick as a son-in-law. The one thing they can all agree on is this: Nick loves Andi. Nick and Andi make out on the couch to seal the deal.

Suave Hair Moments: Someone from Suave gives Andi a shiny coif. “Perfect for a rose ceremony,” decrees Andi. “Best of luck, Andi!” chirps Desiree. “You look wonderful,” notes Catherine. “Why did I watch this?” sighs a nation.

Josh Meets the Family: Josh notes that he only has one chance to make a first impression. He walks into the house and realizes that he is wearing the exact same blue button-down, white shorts outfit as Hy. Awkward! Despite the fashion faux pas, he hands Hy cigars, gives Patti flowers and hyperventilates all over the place. Patti rolls her eyes as Josh sweats through his shirt. They are all concerned that Josh is too much like Andi’s past boyfriends. Josh announces that he wants to marry Andi, and Hy gives him his blessing to propose to his daughter on prime time. Hy has no concerns about Josh whatsoever. In an interview, Josh announces, “Andi is my wife!”

Final Date With Josh: For their final date, Josh and Andi canoodle on a cruise around the Dominican Republic and Andi uses her law degree to grill Josh about what he said to her family. Josh flashes his pearly whites (is he sponsored by Crest White Strips?) and voice-overs that he wants to spend his life with his best friend. Then the producers make the wise decision to station a cameraman in the water to capture the moment that Andi’s bikini-clad behind enters the water after jumping off the boat with Josh and refraining from making a poignant metaphor about love and jumping. Back on land, Josh wants answers. Andi gives him a few without showing her hand or demanding to know why he thought red pants were a good choice for the evening. Josh hands her a baseball card with her name listed as Andi Murray, because of course she is changing her last name. Josh can’t imagine his life without her and Andi says “Josh is so my type” more times than Carl Gauss can count.

Final Date With Nick: For his final date with Andi, Nick opted to pair a blue V-neck T-shirt with blue athletic shorts for a Sad-Eyed-Smurf look. They go off-roading in the Dominican Republic, because it lends itself to the best marital metaphors. Andi and Nick do not canoodle. When Nick tells her that he’s going to marry her, she smiles politely; when they kiss, she holds her braid out of the way. That is not a good sign. Later, Andi stops by Nick’s hotel room and he overthinks and rambles and breathes heavily. Nick feels lucky and says he can’t wait to go grocery shopping with her. Nick hands her a box of sand from their first date. Sand? Sand.

Andi’s Choice: Andi feels passionately about Nick, but she also feels strongly about Josh. The men are nervous, and to prove this, the cameramen take a lot of photos of them staring moodily off into the middle distance. Then Neil Lane shows up to blow his annual promotional budget. Josh picks out an enormous rock.

The Drama: Then it is Nick’s turn. There’s a knock on the door, but it’s not Neil Lane. It’s Andi. The live-studio audience gasps. Chris polls the imported Bachelor/ette detritus about what it all means. Claire, who was loudly dumped by Juan Pablo Galavis, wishes that someone would have come to her door. Drew, who was abandoned by Desiree Hartsock, sadly reveals that it took him months to understand what had happened to him. In short: Andi’s arrival at Nick’s door is bad news for Nick.

The Big Talk: Andi tells Nick that she woke up this morning and just didn’t feel it. Something isn’t right, and she can’t go through with it. Nick is hyperventilating again and Andi joins him. Nick isn’t processing it. She apologizes a lot. Nick accuses her of “taking it too far” and wishing that she hadn’t said or done certain things. Then he takes his box of sand and goes home. But before he goes, he throws all of the roses he was going to scrapbook into the trash. Nick tears up in the limo, because he was in love. The studio audience cries with him. It rains as Andi thinks about what she’s done.

Josh and Andi Sitting in a Tree: At the final rose ceremony, Andi is bubbling out of her skin in excitement, which sounds like a special effect from a Guillermo del Toro movie, but isn’t that gross. Josh comes to find her and immediately launches into a well-prepared speech about how much he loves her. After pretending she was on the fence, she tells him she loves him and has loved him since the moment she first laid eyes on him. He drops to one knee and proposes. She says yes and kisses him while staring at the enormous Neil Lane diamond behind his back.

After the Final Rose: Nick wanders the streets of Wisconsin, heartbroken. He makes a decision and decides to go full creeper. He flies to L.A. to try and talk to Andi before the Men-Tell-All special. He has a heart to heart with Chris Harrison, who takes his message to Andi. She negs him and refuses to grant him an audience. Presumably that’s when Nick grabs a stereo and plays Elvis Costello’s stalker anthem “I Want You” outside Andi’s dressing-room window until the ABC security guards drag him away. Chris tells Andi that this was the second time Nick tried to see her and hands Andi a letter from Nick and suggests she read it (the “before we apply for a restraining order” is implied).

In the Studio: On stage with Chris, Nick blames Andi for giving him false hope and imbuing him with confidence. Nick swears that he likes Josh, stops to dry a tear and says he’ll always wonder about what he could have had with Andi. Chris reminds him that Andi can’t avoid him anymore. She comes out looking very guarded (or like she was wearing extreme Spanx). Nick’s hands shake as he pouts that Andi hurt him. She apologizes. He keeps talking about how hurt he is until he finally goes dark pointing out that if she didn’t love she shouldn’t have “made love” to him. Nick thought she did “fiancée kinds of things” in the Fantasy Suite, which is not a metaphor I am willing to unpack. (She made dinner for his unappreciative college friends?) Also, Nick: what happens in the Fantasy Suites, stays in the Fantasy Suites. Andi is not impressed with that one (Josh probably isn’t either). She tells Nick that she did care about him and that’s why she didn’t let him propose. She tried to be respectful. Chris calls the round after that, but the producers won’t let viewers pick it as “The Bachelorette Most Bleachable Moment.” Instead we are treated to a different awkward Nick moment from earlier in the season. Thanks a lot, Clorox.

The Sweet Ever After: The second Nick leaves and Josh joins Andi on stage, she starts to shine. They giggle, they tease, they hold hands and legs and knees and seem genuinely in love. Josh declares that the show works and to prove that, they randomly bring out Grumpy Cat. Because they can. Viva la Bachelorette!

MORE: Bachelorette Watch: 11 Things We Learned When the Men Tell All 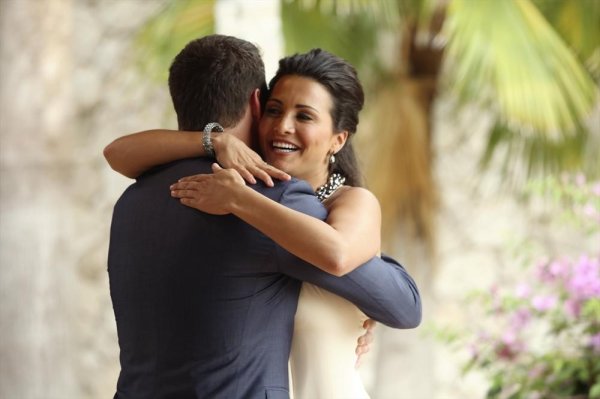 It's The Bachelorette Finale: Will Andi Pick Josh or Nick?
Next Up: Editor's Pick