I Want My Christianity Back – Without the Ugly Baggage

It’s not that I’m ashamed of being a Christian; I’m not – at all. It is just that the word “Christian” comes with so much ugly baggage.

Telling someone I’m a Christian means I must immediately follow it up with, “but not that kind of Christian.” It’s like saying, “Yeah, sure, these are some mind bogglingly ugly suitcases, but I’ve got the coolest stuff on the inside of them. No, really, I do.”

It’s just not worth the effort; and, frankly, I’m tired of lugging these ugly, heavy things around.

Truthfully, I don’t blame people who assume that if you’re Christian you’re anti-LGBT, anti-abortion, anti-real equality, anti-other religions and pretty much anti-anything else that one small but loud subset of Christians find offensive or threatening.

It completely makes sense. It’s why I don’t want to use the word to describe my own beliefs.

Who can blame people for thinking Christians are all anti-everything kind of people when members of the U.S. congress like Michele Bachmann present themselves as speaking for all Christians –and via radio waves – accuses gay people of not only threatening the sanctity of “traditional marriage” but claim they are pedophiles who want to “freely prey on little children sexually.”

I don’t want to be that kind of Christian. So, if that’s the only option, I’m opting out. And, I’m not alone. A whole slue of Christians is opting out as well.

As a 2012 Pew Research study indicates that while the number of people who identify as Protestant or Catholic is decreasing, the number of those who consider themselves religious, but identify with no formal religious group is on the rise. An earlier study by The Barna Group defines a big part of the problem: people who aren’t in the Church and many who are in the Church believe the Church is judgmental and hypocritical.

When looked at together, the findings of these two studies make a lot of sense. An organization whose primary religious figure taught about love has become known for being judgmental against any group they simply don’t like. Is it any surprise Christians are seen as hypocritical?

Christians are being viewed as hypocritical, because many are. Not all of us, of course, but you wouldn’t know that watching mass media. Tragically, Big Media and most of it’s consumers have no interest in coverage of food pantries and other programs across the country that feed hundereds of people each month – all without pushing their beliefs on those in need. On the other hand, the Ku Klux Klan claiming to be a Christian organization? We will Facebook “like” that article into the viral stratosphere.

I want my religion back.

Technically, it wasn’t really taken from me. It’s more like part of it’s been hijacked and held hostage inside all that ugly luggage.

Not surprisingly, the congressperson fear-mongering about gay people coming for your kids and the KKK claiming to be Christian will always make the news. Let’s face it, when the baggage carousel starts rolling around you are going to notice the neon green designer bag with the word “crazy” written across it in pink, but that 26-inch wheeled suitcase in a sensible shade of grey? No one is paying attention to it.

Christians who want to be known more for their love rather than for what they standing over and against need to more fully acknowledge this reality and begin actively speaking out and working against it.

What we see in media isn’t Christianity. Our faith tradition’s core teachings are found in the words of Jesus. The anti-everything Christianity we find on television, radio and in print would remind Jesus much more of the Pharisees than it would remind him of the people actually following his teachings.

It’s a power play. As Napoleon once observed, “Religion is excellent stuff for keeping common people quiet. Religion is what keeps the poor from murdering the rich.”

When you see someone who claims to follow Jesus who has or wants power; when they are saying things about Christianity that cause hurt to other people, when they create divisions, stating beliefs or supporting policies that marginalize already marginalized groups, when they say things that would allow one group of people to exert their will and beliefs on another group of people, you need to immediately question their sincerity and more so their motivation.

Jesus would have advocated none of those attitudes or behaviors. However, they most certainly are tools through which those who already have power maintain their power while keeping those without power divided and bickering amongst themselves rather than focusing their attention on the small fraction of the rich who are nurturing systems that make life unnecessarily difficult for the rest of us – which is also something for which Jesus would not have been an advocate.

Jesus wasn’t a fan of ugly baggage. He confronted the Pharisees every time they tried to unload it onto him or others.

If we want our religion back, we are going to have to do the same.

If we want a Christianity that doesn’t come so unnecessarily cluttered with all of this ugly baggage, we are going to have to start standing up more consistently and begin challenging these power plays wrapped in religion.

Collectively we need to more closely follow the lead of Jesus and lovingly confronting those who want to turn the Prince of Peace into a tool for dividing and marginalizing. Every time anyone tries to exclude a group of people they dislike in the name of the Great Shepherd, we must pronounce the radical inclusion of a loving God.

And when they accuse us of being un-Christian (and they will), we must stand strong and tell them, “You no longer get to own that word. You have used it and abused it and crucified it on crosses of hate, greed, power and control. We are taking our religion back – way back.

All the way back to the teachings of Jesus.”

Mark Sandlin is an ordained minister in the Presbyterian Church (USA) from the South and a co-founder of The Christian Left. 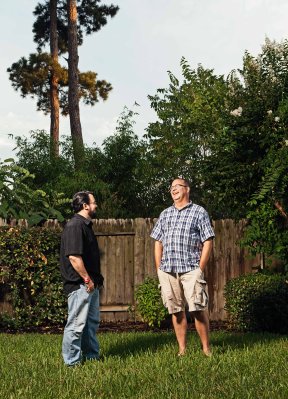 Atheist “Churches” Gain Popularity—Even in the Bible Belt
Next Up: Editor's Pick