Bloody Day in Gaza as Calls for Cease-Fire Intensify

Palestinian mourners cry at al-Shifa Hospital in Gaza City after an explosion killed at least seven children in a public playground in the beachfront Shati refugee camp on July 28, 2014
Mahmud Hams—AFP/Getty Images
By Charlotte Alter

The U.N. Security Council’s call for an immediate cease-fire between Israeli forces and Hamas failed to cease violence in Gaza on Monday, as two large attacks left over a dozen dead and scores wounded.

Israel and Hamas traded blame for explosions at al-Shifa Hospital and a nearby refugee camp in the Gaza Strip on Monday, which killed at least 10 children and left at least 30 people dead or wounded, NBC reports.

Hamas said the explosions were a “direct” strike by Israeli drones, while Israel said they were caused by failed militant rockets. “A short while ago Al-Shifa hospital was struck by a failed rocket attack launched by Gaza terror organizations,” the IDF said in a statement, adding that “there was no Israeli military activity in the area surrounding the hospital whatsoever. ”

At least four people were also killed by a mortar shell in Eshkol, in Israel’s southern district close to the border with the Gaza Strip, the Jerusalem Post reports. At least six others were seriously injured.

The attacks came just hours after U.N. Secretary-General Ban Ki-moon echoed calls from the U.N. Security Council for an immediate cease-fire. “In the name of humanity, the violence must stop,” he said, according to the BBC.

Over 1,030 Palestinians have been killed, according to Palestinian health organizations, many of them children. A daily report for July 28 by the U.N.’s Office for the Coordination of Humanitarian Affairs said that in just the past 24-hour period, 74 Palestinians had been killed. Israel says it has lost 43 soldiers and two civilians.

Ban called for an end to the violence out of respect for Eid al-Fitr, the Muslim holiday commemorating the end of Ramadan. “It’s a matter of their political will,” he said. “They have to show their humanity as leaders, both Israeli and Palestinian.”

His statements follow the Security Council’s call for a “durable” truce that would stop the violence and lead to substantial talks. The Palestinian representative to the U.N., Riyad Mansour, said that didn’t go far enough, and he demanded a formal resolution calling for Israel to remove troops from Gaza.

Israel’s U.N. Ambassador Ron Prosor said the Security Council’s statement was slated toward the Palestinians by failing to mention Hamas and the recent rocket attacks, the BBC reports. 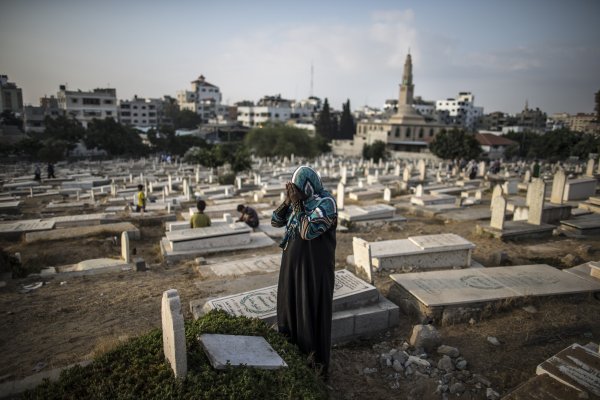 U.N. Urges Eid Truce in Gaza
Next Up: Editor's Pick