In the welcome video to the Sarah Palin Channel, the former governor of Alaska explains her motivation for starting a personal subscription network: “We’ll go beyond the soundbites and the media’s politically correct filter to get to the truth.”

Over her six years in the national spotlight, Sarah Palin has not exactly lacked for media platforms, filtered or unfiltered. She’s had a reality show on TLC and one currently on Sportsman Channel. She’s been a paid contributor to Fox News. And should even Fox prove too much filter for her truth, she’s had no problem taking her message direct, on Twitter, on Facebook and in videos. For Palin to have less-filtered access to the consciousness of her followers, she would have to possess their very souls.

But the most notable distinction about this brand-new platform, so far, is that it allows the former governor to get a message out to the public without the traditional, mainstream filter between her and your wallet. A subscription to SarahPalinChannel.com is $9.95 a month, or $99.95 a year (with a two-week free trial period). That’s 96 cents more a month than a Netflix streaming subscription. It’s 95 cents more a year than an annual subscription to Amazon Prime, which also offers music, streaming TV and movies, Kindle benefits, and free shipping. Not here; if you’ve been mail-ordering your smoked salmon from Alaska (there’s no online store at the SPC site), you will still have to pay full freight.

So politics aside, it’s fair to ask what the value proposition is for a subscription to Sarah Palin Channel. At this early point–the channel launched Sunday and began collecting paid subscriptions at startup–much of SPC’s front-page offerings are repurposed and available in some form free elsewhere.

There’s the seven-minute video calling for President Obama’s impeachment from earlier in the month; various speeches, like her July 19 talk to the Western Conservative Summit, that are on YouTube; reproductions of conservative meme images; a link to her daughter Bristol’s blog at the religious site Patheos.com. There’s a national debt counter and a countdown clock to the end of the Obama administration. Getting a place of prominence is “Sally’s Word of the Day,” a feature “brought to you by my Scrabble-obsessed Mom and her friends.” (The inaugural word: “Rectitude”–“the quality of being honest and morally correct”–which reproduces the Merriam-Webster definition verbatim.)

But wait! There’s more! The marquee original content thus far is a collection of short videos in which–as she’s been doing via Facebook–Palin weighs in on current events hitting longtime talking points. The trouble in Ukraine, for instance, is evidence that we need to “unlock” our natural energy resources, or Drill, Baby, Drill. Another publicizes her book from last year re-fighting the “war on Christmas.” In others, she answers questions from supporters, such as, “How many things can you name that Obama has failed at?”

Many of SPC’s short videos recall Palin’s hits for Fox News, placing her in a home-office setting backed symbolically by a carven eagle, a flag and a globe, speaking in a single take, YouTube-style; others have her speaking at an angle to the camera, as if addressing an unseen interviewer. The tone is on-brand: the folksy, familiar speech (after last year’s Phil Robertson controversy, she tells fans, “You guys rose up and said, ‘Oh my gosh, enough is enough!'”), her knack for digs that will rouse fans and aggravate detractors (Obama is “addicted to OPM”–say it out loud–“other people’s money”), the Alaskan-mountain imagery on the homepage.

Beyond that, what SPC is trying to sell is community and connection. The site’s videos are shareable on social media–so depending on your friends-and-family list, you’ll be seeing them free on Facebook soon enough–but you can only see or post comments if you subscribe. The idea, an FAQ says, is that “the community would feel more secure”–secure enough, for instance, for one commenter to post on the Putin video that “Like most people who have been paying attention, I would trade our little Kenyan collectivist for Vladimir Putin any day.”

For my money, though–or rather, what will be my money if I keep my subscription beyond the free trial–the channel is most effective, like many of Palin’s past media efforts, when it takes her out of the talking-head chair, especially in a series of odd, often fascinating “Behind the Scenes” videos. In one, Palin, wearing a vest and an Oscar the Grouch T-shirt, shows off a painting in her home office of a tableau of Republican presidents–Ike, Reagan, both Bushes, Lincoln, Nixon–laughing around a pool table. In a little inset photo, she’s holding her son Trig at a Tea Party rally, where she says her appearance was misinterpreted by the media. “At that time, I didn’t have so much of a platform or a microphone to counter some of the falsehoods and goofy, stupid things that some of the news channels say and do,” she says. “But now I do!”

Thanks to you, subscriber! Really, you could make a good case that the biggest feature SPC offers subscribers for $99.95 a year is the ability to give Sarah Palin $99.95 a year–that is, to feel empowered, to feel like part of a movement, to defy the politically correct media that don’t respect you, to stick it to “the powers that be” by standing up for liberty and Christmas.

Whether Palin has any future in politics or SPC is one of the last efforts to monetize the brand that John McCain launched by naming her his running mate in 2008, Palin demonstrably still has that ability to home in on exposed nerves, to appeal to a sense of cultural besiegement and grievance, to make the personal archly, needlingly political.

Just look, for instance, at her video, “An Alaskan Garden and the Lessons for D.C.,” which promises “a behind-the-scenes look at the Governor’s kitchen garden.” For over six minutes, Palin stands in her kitchen, tearing up lettuce for her salad–bought at the store, she says, not grown in her yard–and talks about the abundance of sunlight in the Land of the Midnight Sun, and the richness of Alaska’s resources in general, and what it all says about what this country would be if those liberal bureaucrats would just get out of our darn way: “The sun and our volcanic soil that makes this area so rich, so rich in resources, this soil, our oil and our gold and all that God’s created for man’s use, the minerals, the fisheries, the resources in the state can help secure the union. And once the Feds figure that out and allow us to unlock the lands in Alaska and responsibly develop them? Well, our country will be more secure.”

Just one thing, though: you never do get that look at Palin’s kitchen garden. You just see her step away from her salad for a second and look at some unseen spot beyond her kitchen window. But pony up just $9.95 a month, or $99.95 a year, and who knows? Maybe someday, all will be revealed. 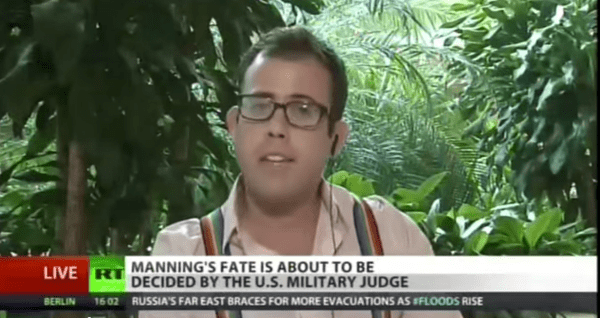 Inside the Bizarro World of 'Russia Today'
Next Up: Editor's Pick