Questions About a 5.5-inch iPhone

There’s already a bit of controversy surrounding the launch of Apple’s new iPhones this fall.

Most informed sources seem to all agree that Apple will introduce an iPhone 6 sporting a 4.7-inch screen, as compared to the 4-inch screen on today’s iPhone 5s and 5c models. But there are several rumors coming from the supply chain that suggest Apple is also preparing to release a 5.5-inch version of its newest iPhone, too.

The possibility that Apple could be making a 5.5-inch iPhone leads to a few important questions.

Why make a giant iPhone?

The first: If Apple really wants the 4.7-inch model to be what we in the industry call the “hero” model — one that would drive the majority of iPhone sales going forward — why even make a 5.5-inch model at all?

For example, well over 80% of smartphones sold in Korea have screens that are at least five inches and above. They have also become big hits in China and other parts of Asia where larger smartphones double as a small tablets, thus driving demand in these regions of the world for what are called “phablets.”

I suspect that if Apple is making a larger iPhone 6 in the 5.5-inch range, it will most likely be targeted at these Asian markets where demand for large smartphones is relatively strong. This is not to say that Apple wouldn’t offer a 5.5-inch iPhone in the U.S. — I believe there could be some interest in one of this size — but like most of my colleagues in the research world, we believe that the lion’s share of those buying the new iPhone would want the 4.7-inch version if indeed this is the size of it when it comes out.

Would you buy it?

The second question: If Apple does bring a 5.5-inch iPhone 6 to the U.S. market, would you buy one?

For the last month or so, I have been carrying three smartphones with me of various screen sizes all day long, and have learned a lot about my personal preferences. In my front pocket is an iPhone 5 that has a four-inch screen. In my back pockets are a Galaxy Note 3, which has a 5.7-inch screen and the new Amazon Fire, which sports a 4.7 inch screen — the same size that is purported to be on the new iPhone 6 when it comes to market.

Here are my observations. Keep in mind they are personal observations, but I suspect that my preferences are pretty close to what the majority of the market may prefer when it comes to the screen sizes in a larger smartphone.

I like to keep my primary smartphone with me all of the time, so my iPhone 5 is in my front pocket. The screen size is very important in this case and, at four inches, it easily fits in my right-front pants pocket and is easy to access as I need it. The other thing that is important about the four-inch screen is that I can operate it with one hand. From a design point, one-handed operation has been at the heart of all iPhones to date, as Steve Jobs was adamant that people wanted to be able to use their phones with one hand. So the idea of possibly moving up to a new iPhone with a 4.7-inch screen has intrigued me, as I wondered if a smartphone with this size screen would fit in my pocket and still be usable with one hand.

So when I got to test the 4.7-inch Amazon Fire phone, I immediately put it in my front pocket. Thankfully, it fit well and continued to be just as easy to access as the smaller iPhone 5s with its four-inch screen. Also, while I had been skeptical that I could still use it with one hand since I have medium-sized hands, I found that I could still operate the Amazon Fire with one hand easily. The other thing about a 4.7-inch screen is that the text is larger; for my aging eyes, this is a welcome upgrade. However, on these two issues, the Galaxy Note 3, with its 5.7-inch screen, flunked both tests. This phablet-sized smartphone did not fit in a front pocket, nor could I use it for one-handed operation.

That led me to wonder if a Samsung Galaxy S% smartphone, with its five-inch screen, would work in these similar scenarios. So I took a Galaxy S5 that I have, put it into my front pocket and tried to use it with one hand. To my surprise, it also worked well. But I had another smartphone with a 5.2-inch screen and, amazingly, that failed both tests. On the surface, at least for me, a smartphone up to five inches did fit in my pocket and allowed me to use it one-handed, but any screen larger than that was a bust.

I also did this test with some of the women in our office. We have a very casual workplace and most wear jeans to work, so I had them try the 4.7-inch Amazon Fire. They were also surprised that it fit O.K. in their front pockets and could still be used in a one-handed operation mode. However, like me, a screen larger than five inches did not fit in pockets and was impossible to use with one hand for all of them. These women did point out to me though that for most women, it’s less likely that they would carry a smartphone in their pockets as more keep them in a purse or handbag. That being the case, at least for the women in our office, a smartphone with a 5.5-inch screen was acceptable to them, although one person said she would prefer the smaller 4.7-inch smartphone if push came to shove.

Ultimately, it probably comes down to personal preference, yet I suspect that an iPhone with a 4.7-inch screen would take the lion’s share of Apple’s iPhones sales if this is indeed the size of the company’s new iPhone.

But a 5.5-inch smartphone begs a third question that, at the moment, has stymied many of us researchers: Would a 5.5- or 6-inch smartphone eat into the demand for a small tablet?

I find that in my case, even though I do use the 5.7-inch Galaxy Note 3 often for reading books while out and about or while standing in line, my iPad Mini is still my go-to tablet due to its size. I also have a 9.7-inch iPad Air with a Bluetooth keyboard, but I almost exclusively use that tablet for productivity and less for any form of real data consumption.

Some researchers have suggested that, especially in parts of the world where larger smartphones or “phablets” are taking off, this has really hurt the demand for smaller tablets — and that’s partially why demand for tablets has been soft in the last two quarters. Unfortunately, the data is still inconclusive on this, but my gut says that “phablets” are at least having some impact on demand for tablets in many regions of the world.

With the expected launch of Apple’s new larger-screen iPhones just around the corner, those planning to buy a new iPhone might want to keep my experience in mind. There’s a very big difference between how a person uses smartphones that are less than five inches and smartphones that have larger screens. For those who keep them in their pockets and/or want to use them with one hand, they have only one real choice. For them, a smartphone smaller than five inches is their best bet.

But for those that don’t keep their smartphones in their pockets, the virtue of a larger screen is that it delivers much more viewing real estate. Consequently, it’s much easier to use when reading books, web pages and for other tasks where a large screen can deliver a real benefit. The good news is that if these Apple rumors are true, people will have better options coming from Apple. For the first time in the iPhone’s history, Apple might give users multiple screen sizes to choose from. 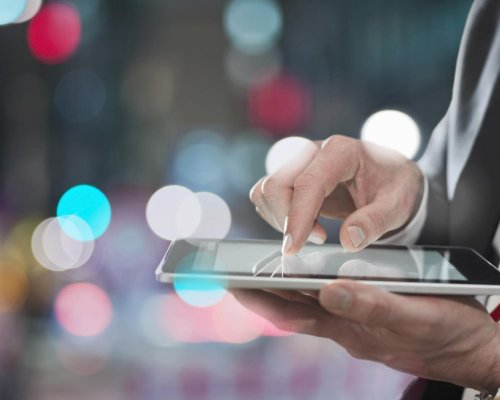