Sarah Palin Has Launched Her Own Internet Television Network

Sarah Palin has never been uncomfortable with her status as one of America’s most watchable celebrities, which she’s enjoyed since first joining John McCain’s presidential campaign as a virtually unknown former governor of Alaska six years ago next month. She gave us a memoir, she gave us another memoir, she landed a spot at Fox News. “She was hot and got ratings,” network president Roger Ailes told the Associated Press.

Now, she’ll be the star of her own internet television network, Variety reports, after The Sarah Palin Channel launched Sunday night.

In an introductory video posted on the network’s website, Palin digs at the status quo of information and politics in the U.S., and while she doesn’t ever directly address the perimeters of party lines, there is obvious reason to suspect that she’s gunning for a conservative audience.

“We’ll go directly to the root of the problems confronting America,” she says in the clip. “We’ll talk about the issues that the mainstream media won’t talk about. We’ll look at the ideas that I think Washington doesn’t want you to hear.”

The 50-year-old describes the network as a “community” where, for a subscription fee of either $9.95 a month or $99.95 a year, users can post footage to the site, send Palin their own questions and, should they so desire, read a blog curated by Bristol Palin, her 24-year-old daughter.

Palin’s not the first candidate to lose an election and then embrace the media. Aug. 1 marks the ninth anniversary of the launch of Current TV, Al Gore’s since-folded television network, which Al Jazeera bought last year. 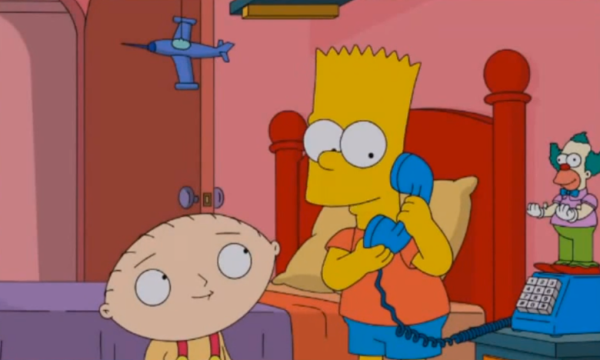 A First Look at the Family Guy–Simpsons Crossover
Next Up: Editor's Pick