When Peter Met Homer: A First Look at the Family Guy–Simpsons Crossover

A five-minute preview of the eagerly awaited crossover episode between The Simpsons and Family Guy aired at Comic-Con 2014 in San Diego on Sunday.

The below clip of the episode, which will air as the premiere of Family Guy’s 13th season in late September, isn’t really enough to gauge how the hour-long special will turn out. The Griffins will somehow end up in Springfield; Peter Griffin and Homer Simpson will get along — they bond over donuts and beer — and then predictably won’t; Stewie will fawn over Bart’s antics.

But there’s room for optimism. Say what you will about their crassness and so on, but it is difficult to deny that both shows are blessed with some bright writers. We see this in the divergent evolution of the two series over time. Both began as routine caricatures of your Middle American family (a slovenly patriarch, a housewife who act and talks like just another frustrated shrew, et al) and over the years have matured into distinct pillars of popular culture.

For all the complexity The Simpsons’ humor has acquired — and the show is indeed better for it — it remains at its core a story about family. “The chief asset of The Simpsons,” Dennis Perkins wrote for AV Club after the premiere of its 25th season last September, “is the Simpsons themselves.” Its medium is cartoon, giving it license to be, well, cartoonish, imbuing it with a humor never found by laugh-track-dependent family sitcoms like Everybody Loves Raymond and All in the Family.

Family Guy, meanwhile, has become a delightfully bizarre and sometimes self-indulgent irreverent pantomime that can border on nihilism. As South Park famously mocked in a 2006 episode, the plot doesn’t matter as long as anyone and everyone is lampooned along the way, and the jokes are solid. And they are, most of the time.

And so the crossover will likely rely on the consciously self-referential comedy that has helped both series avoid staleness in relatively old age. (The Simpsons aired in 1989 and Family Guy a decade later; the former is the longest-running sitcom and animated series in American history.) Jokes come from the fact that the characters, after years on the air, are apparently now aware that they exist on animated television programs. Case in point: Peter’s attempt to buy a farm in season 11; the farm will later become a family-run meth lab.

“Somebody from Fox was supposed to call ahead,” he says. “They usually take care of it and I just go ahead and do stuff.”

The metacomic method, which has also helped sustain the more or less civil rivalry between the two shows over the years, can work well as a self-defense mechanism. Fox first announced the crossover episode last summer; many critics have since called it just another commercial gimmick. Brian, the Griffins’ dog (who is also an alcoholic and a repeatedly failed writer, if you want an example of how soon the show can go dark on you) appears to have read their concerns.

“This Springfield place seems nice. We should visit here again,” Lois Griffin says in the preview clip for the episode. “I don’t know, Lois,” Brian responds. “It kind of feels like a one-shot deal.” 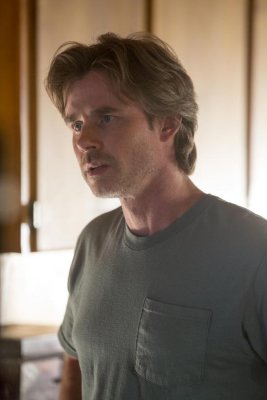 RECAP: Sunrise, Sunset and Everything in Between on True Blood
Next Up: Editor's Pick