Palestinians carry items and belongings they found in the rubble of destroyed buildings on July 27, 2014 in the Shejaiya residential district of Gaza City as families returned to find their homes ground into rubble by relentless Israeli tank fire and air strikes.
Marco Longari—AFP/Getty Images
By Sam Frizell

Propositions for a cease-fire in the Gaza Strip collapsed Sunday, with the death toll on both sides increasing as Hamas continued to lob rockets into Israel and Israeli military forces renewed their ground operation in Gaza.

Israeli Prime Minister Benjamin Netanyahu said Sunday that Hamas is “continuing all its operations” despite agreeing Sunday to a temporary cease-fire extension after it initially refused to do so.

By midafternoon on Sunday, militants had fired more than 40 rockets from Gaza, the Israeli military said, killing an Israeli soldier near the border. Meanwhile, Israeli troops pounded the coast, killing four Palestinians.

U.S. President Barack Obama spoke with Netanyahu by phone Sunday, according to a White House readout of the call, telling the Israeli leader the U.S. condemns Hamas’ attacks against Israel but also reiterating the U.S.’s “serious and growing concern” about casualties on both sides of the conflict, as well as “the worsening humanitarian situation in Gaza.” Obama also “made clear the strategic imperative” of an immediate humanitarian cease-fire that leads to a broader end to the violence.

On Saturday, after intense efforts by the U.S. and U.N., Hamas and Israeli agreed to a 12-hour lull, which allowed medics to collect close to 150 bodies and Palestinians to return to neighborhoods reduced to rubble, the Associated Press reports.

That cease-fire officially ended at 8 p.m. on Saturday, the New York Times reports, after which Israel announced it would hold fire for another 24 hours at the request of the U.N. Hamas, however, rejected Israel’s cease-fire extension on the grounds that Israeli forces would remain in Gaza. Israeli military spokesman Lieut. Colonel Peter Lerner said that Hamas fired 25 rockets and mortar shells into Israel. In response, Israel resumed its operations Sunday morning.

Early on Sunday — before a new wave of attacks began — Hamas backtracked and announced it would embrace a cease-fire.

Hamas’ decision came “in response to the intervention of the United Nations,” said a Hamas official in Gaza, and to aid the people of Gaza in preparation for Eid al-Fitr, the three-day holiday that marks the end of the Ramadan holy month. A spokesman for Hamas said the truce would go into effect at 2 p.m. on Sunday.

But as rocket fire continued on Sunday, the prospects of a lasting cease-fire dimmed. Hamas has said it will refuse a cease-fire as long as Israeli troops occupy the Gaza strip.

The latest attempt at a cease-fire deal comes 10 days after Israel launched a ground and aerial operation against Hamas targets in Gaza following several days of rocket and bombing attacks from both sides of the conflict. More than 1,050 Palestinians have been killed in the 20-day bombing and subsequent invasion, the vast majority of them civilians, according to Palestinian health officials. Two Israeli civilians and 43 Israeli soldiers have died. 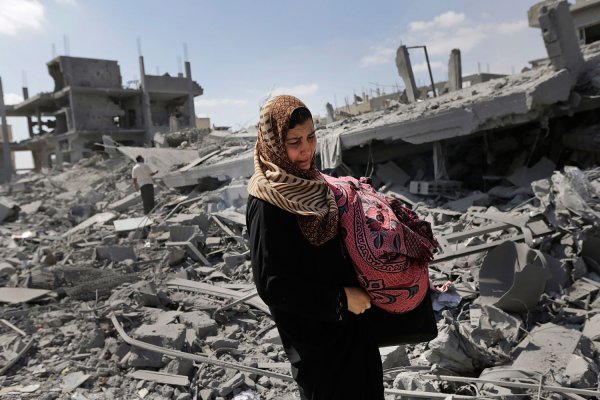 Cease-Fire Ends in Gaza
Next Up: Editor's Pick