The State Department relocated all personnel from the U.S. Embassy in Tripoli, Libya, on Saturday following an outbreak of violence between Libyan militias, the department announced.

“A lot of the violence is around our embassy but not on the embassy, but nevertheless it presents a very real risk to our personnel,” Secretary of State John Kerry told reporters in Paris, ABC reports.

Kerry blamed the “freewheling militia violence” that has flourished since the ousting of former president Muammar Gaddafi.

“We are committed to supporting the Libyan people during this challenging time, and are currently exploring options for a permanent return to Tripoli as soon as the security situation on the ground improves,” deputy spokesperson Marie Harf said in a statement.

U.S. military assisted in the operation and drove personnel to Tunisia. The relocation took five hours and was “without incident,” according a statement from Pentagon Press Secretary Rear Adm. John Kirby.

Embassy staff will now work out of Washington, D.C., and other locations in the region.

The relocation occurred the same day the State Department issued a new travel warning that strongly advised U.S. citizens to avoid traveling to Libya and to leave immediately if already visiting.

In 2012, an attack on U.S. diplomatic compounds in Benghazi, Libya, by Islamic militants killed four Americans.

“Securing our facilities and ensuring the safety of our personnel are top Department priorities, and we did not make this decision lightly,” Harf’s statement continues. “Security has to come first. Regrettably, we had to take this step because the location of our embassy is in very close proximity to intense fighting and ongoing violence between armed Libyan factions.” 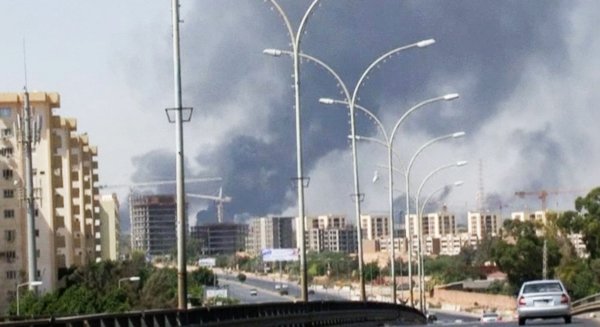