How Apple, Google and the White House Hold More Productive Meetings (And You Can, Too)

If you have ever wanted to pop an escape hatch or teleport to distant worlds just to get out of a meeting, take heart.

There are ways to hold a better meeting.

Forward-thinking companies have found creative ways to get their teams together, and their lessons and structure can be easily duplicated in meetings anywhere. These creative methods aren’t just clever for cleverness’s sake: Most of them are science-backed and all of them are grounded in successful experience.

With just a handful of hacks, meetings can be speedier, more productive, and more enjoyable for everyone involved. Here are 9 outside-the-box ideas—and the science and success behind them—that you can discuss … at your next meeting, I guess.

What’s your record for longest meeting?

Can anyone beat my four-hour marathon? (I bet many of you can!)

When it comes to meeting pain points, length often tops the list. How is it that meetings tend to go on so long, sometimes (OK, many times) unnecessarily? Here’s an old project management adage that might explain it:

For this reason, you may want to keep meetings to 15 minutes or shorter, whenever possible. Yahoo’s Marissa Mayer will schedule 10-minute meetings, out of necessity for her busy schedule. The team at Percolate sets 15 minutes as the default length for all meetings, adjusting up or down as needed. Percolate values the 15-minute default so highly, they framed it in their set of six meeting rules.

Why might it seem like 15 minutes is an ideal starting point for meeting length? For one, it’s easy to schedule in an Outlook calendar or Google calendar. Though the default in most calendar apps is 30 minutes, you can quite easily adjust down to 15-minute increments as that’s how most schedule grids are created.

For the science behind the 15-minute rule, you need look no further than a TED talk. Each TED talk is kept to 18 minutes or shorter, the same time as a coffee break and a helpful constraint for presenters to organize their thoughts. Scientifically, 18 minutes fits right in with the research on attention spans: 10 to 18 minutes is how long most people can pay attention before checking out.

The 18-minute max has physiological roots. Our bodies require a large amount of glucose, oxygen, and blood flow when the brain processes new information. Sooner or later, we feel physically fatigued.

Here’s a helpful follow-up to the 15-minute rule. How keep yourself accountable to a set meeting length? Why not set a timer.

That’s the way that 37 Signals recommends. The company that built Basecamp is quite rigid about meetings. Their first instinct is to avoid meetings altogether. When they’re unavoidable, though, 37 Signals defaults to a set of meeting rules;turning on a timer is Rule No. 1.

The psychological effect of the timer can be traced to the creative burst brought forth by limitations and constraints and deadlines. Many amazing artists—like Austin Kleon and Damien Correll—use constraints to fuel their ideas and creations. The countdown of a timer might do the same for your meeting (and it will at least get you out of there in time for lunch).

3. Take the chairs away

The “stand-up meeting” has come to mean more than just a meeting where everyone stands up. It refers to a daily team meeting where team members receive status updates on the latest happenings. We have stand-up meetings at Buffer, and since we’re a distributed a team that connects online, our stand-ups don’t necessarily mean we all stand up (although some of us could be standing, I guess!).

Benefits of standing up extend beyond expediency, too. Andrew Knight and Markus Baer of Washington University conducted a study on stand-up meetings versus sit-down meetings, rating the ability of participants to work together, share ideas, and produce quality work. They measured these different elements using surveys, observation, and physiological sensors.

The results: Standing up leads to greater excitement about the creative process and it allows for greater collaboration on ideas.

4. No laptops for note taking

Do you take notes during meetings? If so, hand-written notes are the way to go.

Beyond a better understanding of concepts, a no-laptop rule should help with focus and attention, which is why many companies have taken that route. Speaking of banned electronics …

In a fast, efficient meeting, there should be no time to check cell phones, and just in case, many companies take the added step of asking employees to leave their phones at the door. Even the White House is in on the act. In Cabinet meetings, attendees are asked to write their name on sticky notes, place them on their phones, and deposit their phones in a basket.

The reasons for creating a no-cell-phone zone might seem obvious (games and texts would figure to detract from focus), and there has been research, too, into the detriment of cell phones in meetings. The Marshall School of Business conducted a survey of over 500 professionals and found that cell phone use is almost always frowned upon by your coworkers:

4 meeting tips from Google, Apple, and others

1. Keep your meetings to 10 attendees or fewer

The 10-person rule at Google, as mentioned in Kristin Gill’s book Think Like Google, is based on a fast-moving, startup culture where work time is precious for each employee. The leaner the invite list, the more time it leaves for the uninvited to forge ahead with other work.

As Gill writes: “Attending meetings is not a badge of honor.”

Steve Jobs and Apple found their most effective way to end a meeting was to assign responsibility for tasks and decisions. Every task is assigned a D.R.I.—Directly Responsible Individual. Doing so provides public accountability for an individual to ensure that the project or task got done, and it sends clear, organized instructions for the team to follow.

3. Pause for a two-minute silence break

Seems counterintuitive to plan silence into a meeting, doesn’t it? Alexander Kjerulf, author of Happy Hour Is 9 to 5, has found silence to be an ideal way to encourage deep thinking and ideas, right in the midst of a meeting.

Since few of us can think deeply while we’re talking, the two-minute silence break gives a chance to mull over a decision, issue, or stalemate.

4. In 5 words or fewer, what’s this meeting about?

American Express vice president Christopher Frank recommends a constraint on the way you think about meetings. At the start of every meeting, ask yourself:

“What exactly are we meeting about?”

Everyone at the meeting gets to answer the question. They can only use five words or fewer in their answer.

This will show you if everyone is on the same page or not and if your meeting topic is focused enough. Are the answers inconsistent or too long? Refocus the meeting and try again.

Over to you: What has been your most enjoyable meeting hack?

It’s clear that meetings can be productive, successful, painless ventures. Including one or two of these hacks in your next meeting might be exactly what’s needed to get more done or boost meeting morale.

Kevan is a content crafter at Buffer, the super simple social media management tool. His social media and productivity tips have appeared in Fast Company and Lifehacker, and he’s always on the lookout for a good headline pun. Connect with him on Twitter . 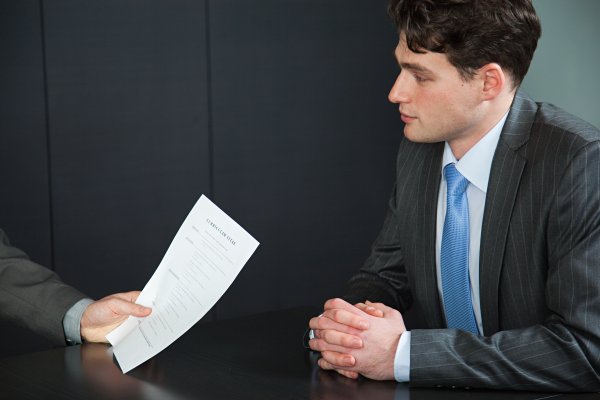 7 Cover Letter Mistakes That Will Sink You
Next Up: Editor's Pick