Harry Potter Grows Up: How Daniel Radcliffe Lost His Virginity

Daniel Radcliffe in Toronto promoting his movie What if? on July 23, 2014.
Chris So—Toronto Star/Getty Images
By Joan E. Greve

“I’m one of the few people who seem to have had a really good first time,” the 25-year-old said. “It was with somebody I’d gotten to know well. I’m happy to say I’ve had a lot better sex since then, but it wasn’t as horrendously embarrassing as a lot of other people’s were.”

That lack of embarrassment could have something to do with his apparent comfort without clothes on (or a quick sip of Felix Felicis to calm the nerves). Radcliffe had a nude scene in the Broadway play Equus in 2008. “There’s something to be said for getting naked onstage when you’re 17,” he said. When asked about what happened when he met a girl who had seen him in the play, Radcliffe joked, “I would normally follow that up with, ‘Oh, cool, you’ve seen me naked.'”

The actor stars in the romantic comedy What If this month, but he admitted that some of his own watching habits lack a certain refinement. He and his girlfriend, actress Erin Darke, enjoy the reality television show Millionaire Matchmaker. “It’s unbelievably compulsive television,” he said. “But I watch [the male participants], and I’m like, ‘How are you speaking to a woman like this?!'”

Harry Potter is much more of a gentleman than that. 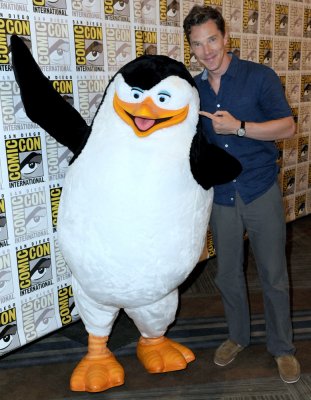 Benedict Cumberbatch Chills With a Penguin at Comic-Con
Next Up: Editor's Pick