It’s been more than a year since “Weird Al” Yankovic told the world, on his blog, that after his current contract ran up, he would be exploring releasing singles digitally rather than full albums. It’s been a little more than a week since his album Mandatory Fun was released, and just a few days since he reiterated that he wasn’t sure he would be releasing any further conventional albums.

Then, as of Wednesday, his situation changed: Mandatory Fun officially became Yankovic’s first album to top the Billboard chart.

“I didn’t think this was an option for me,” he tells TIME. “I thought there was a glass ceiling for comedy albums. The last time a comedy album topped the Billboard charts was over half a century ago.”

But that doesn’t mean his plans are changing. The success of Mandatory Fun doesn’t mean he’ll stick with the album-centric way of releasing music.

“I continue to think the same things that I thought prior to the album going to Number 1. I still think that albums for me are not the most efficient or intelligent way for me to present my music to the public,” he says. “I would prefer to get my songs out in a more timely fashion.”

Being an artist who only releases singles just makes sense, he says, since he likes to parody songs when they’re still at the forefront of listeners’ minds. Especially given the perfect storm that YouTube is — helping music videos and comedy sketches get to viewers in a way that didn’t used to be possible — his goal is to capitalize on the technology as much as possible.

And that means he’s not following other artists’ leads: the music video onslaught that came with Mandatory Fun — eight videos in eight days — has been oft compared to Beyoncé’ strategy with her 2013 album Beyoncé. “Many people have brought that up and it does irk me just a little bit because on my last album, which came out three years ago, I released 12 videos for the 12 tracks from the album all at the same time,” he says. “I doubt that she got that idea from me, but the fact that people are saying I pulled a Beyoncé, that’s just not accurate.”

He’s also not setting anything in stone. Yankovic says that he knows that albums still work best for many artists, and the tide of the music business may turn back for him as well. Mandatory Fun hasn’t changed his mind about the format, but something else might. “I’m not drawing any hard lines in the sand,” he says. “I’ll do whatever’s appropriate, and if that doesn’t work out I’ll do something else.”

Most Popular on TIME
1
Beirut Explosion Triggers Widespread Destruction
2
Explosion in Beirut: Photos From a City Still Reeling From the Blast
3
How Corporations Can Address Racial Inequality 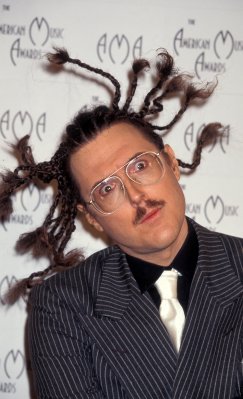