Running back Ray Rice of the Baltimore Ravens addresses a news conference at the Ravens training center on May 23, 2014 in Owings Mills, Maryland.
Rob Carr—Getty Images
By Eliana Dockterman

The National Football League confirmed Thursday that the Baltimore Ravens’ Ray Rice has been suspended for two games without pay and given a $58,000 fine after a grand jury indicted Rice with assaulting a woman he later married.

“As you acknowledged during our meeting, your conduct was unquestionably inconsistent with league polices and the standard of behavior required of everyone who is part of the NFL,” NFL Commissioner Roger Goodell wrote to Rice in a letter following a meeting between the two men.

Rice pled not guilty to aggravated assault in the third degree after a physical altercation between him and then-fiancee Janay Palmer left Palmer unconscious in an Atlantic City casino elevator. A grand jury indicted Rice in March; Rice and Palmer married the following day. Rice settled those charges by entering a pretrial program in May, which meant he was not required to pay a criminal fine or serve jail time. The indictment will be cleared from Rice’s record in one year.

However, the NFL says Rice violated the league’s personal conduct policy, opening him up to punishment by the league.

The running back’s suspension from play will begin on Aug. 30, and he will be eligible to play again on Sept. 12. He will not be paid for those two games plus an additional game, a loss that totals in more than $470,000. He is permitted to participate in training camp and preseason games. The three-time Pro Bowl player can appeal the decision within three days.

Goodell went on to say that Rice was expected to continue counseling.

“It is disappointing that I will not be with my teammates for the first two games of the season, but that’s my fault,” Rice said in a statement released by the team. “As I said earlier, I failed in many ways. But, Janay and I have learned from this. We have become better as a couple and as parents.”

“We also respect the efforts Ray has made to become the best partner and father he can be,” General Manager and Executive Vice President Ozzie Newsome said in a statement. “That night was not typical of the Ray Rice we know and respect. We believe that he will not let that one night define who he is, and he is determined to make sure something like this never happens again.” 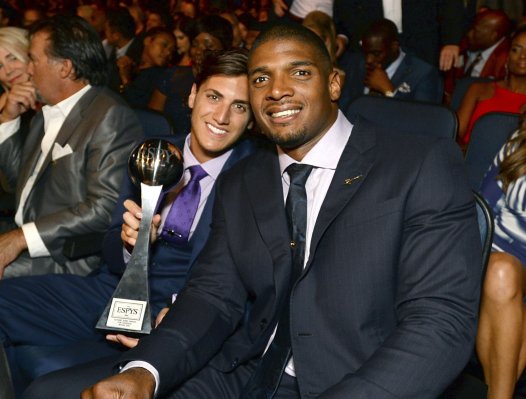 Watch Michael Sam's Emotional Speech at the ESPYs
Next Up: Editor's Pick