As Israel Fights Hamas in Gaza, Egypt Plays the Peacemaker Once Again

Smoke from an Israeli strike rises over Gaza City on July 24, 2014.
Adel Hana—AP
By Mirren Gidda

John Kerry, the beleaguered U.S. Secretary of State, arrived in Cairo Monday to try and broker another cease-fire agreement between Israel and Hamas, a Palestinian militant group which controls the Gaza Strip. But it’s not the U.S. that’s most likely to get a deal done – it’s Egypt.

Egypt has often played the role of negotiator when conflicts between Israel and Hamas have bubbled up in the past. Former Egyptian president Hosni Mubarak brokered a cease-fire between them in 2009. After Mubarak was given the boot in 2011, it was left to Mohamed Morsi to negotiate the next truce.

Cairo, though, has a rough road ahead. Israel and Hamas aren’t likely to seek a cease-fire just yet, as both are claiming successes in their latest bout of violence. Israel says it’s destroying Hamas’ tunnel network. Hamas, meanwhile managed to scare several international airlines away from flying to Israel for a few days for fear of rocket attacks. It also claimed to have captured an Israeli soldier.

Egypt’s position as peacemaker dates back to 1979, when then-president Anwar Sadat, exhausted by Egypt’s 30 years of war with Israel, signed a peace agreement between the two countries. It was a deeply controversial decision — Israel is not, and was not, considered a traditional ally by other Arab countries. Sadat was assassinated two years later.

“In the intervening 35 years [since 1979], Egypt has always played an important role, both because of its geography and the peace treaty,” says Robert Danin, Senior Fellow at the Council for Foreign Relations. “It is the largest Arab country and still has a leadership role.”

Yet for Egypt’s current president, Abdul Fattah al-Sisi, who took control after playing a key role in ousting the Islamist Muslim Brotherhood’s Morsi, the peace treaty and its accompanying accord agreeing to Palestinian autonomy no longer carry much weight.

“The view in the west is Egypt has traditionally played [the role of peacemaker] and this is a role they should play now,” says Eric Trager, Wagner Fellow at the Washington Institute for Near East Policy. “But Sisi is in an existential conflict with the Muslim Brotherhood in Egypt, and Hamas is the Palestinian equivalent. Egypt views Hamas as the same as the enemy they’re fighting at home … It’s not going to offer cease-fire terms that are at all favorable to Hamas.”

International diplomacy isn’t exactly at the top of Sisi’s agenda, either. Facing upheavals in Egypt’s Western Desert and the Sinai, plus the ever-present threat of the Muslim Brotherhood, Egypt’s president has his own domestic conflicts to sort out.

It’s easy to assume that a prolonged war between Israel and Hamas would benefit Egypt, who wants to see Hamas weakened. But Danin thinks otherwise, as Egypt’s Arab partners put pressure on it to act.

‘”At a certain point [conflict] isn’t [beneficial],” says Danin. “When things get out of hand, the perception in the Arab world is that Israel is slaughtering Palestinians … it puts Egypt in a difficult position.”

Egypt’s acting as a negotiator not only appeases the Arab world — its financial backers in the Gulf States particularly — but the U.S. as well.

“Sisi needs to establish his credibility in the West,” says Dr. Claire Spencer, Head of the Middle East and North Africa Program at Chatham House. Brokering a cease-fire presents “Egypt as a power to be reckoned with,” she adds.

If Egypt can help put an end to Israel’s current invasion in Gaza, it will be lauded as a peacemaker and a key player in international diplomacy. Yet Sisi may have darker motives for getting involved with negotiations. Cairo’s current record on rule of law, democracy and human rights is dubious, to say the least. The recent sentencing of three Al-Jazeera journalists to seven years in jail is only one example of this. “When people are focusing on Israel this is good,” says Danin. “It means people aren’t focusing on Egypt.”

Sisi, then, is torn. Arranging a cease-fire between Israel and Hamas will paint him as a hero to the West and the Arab world, both sick of the bloodshed in Gaza. Yet any cease-fire that benefits Hamas will cost him support amongst his party and strengthen an enemy. Caught in this deadlock, a truce looks unlikely. Whatever Sisi suggests, Hamas is almost sure to refuse. 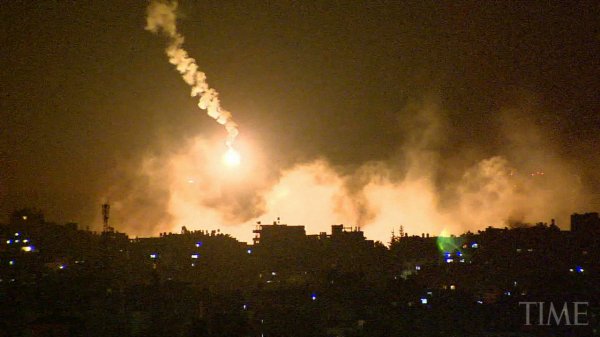 A Day in the Life of Israeli and Gazan Residents
Next Up: Editor's Pick