Sex after marriage, the old saying goes, has three phases: kitchen, bedroom and hallway. Kitchen sex is the spontaneous type spouses have when they first get together. Bedroom sex is the more routine lovemaking that sets in after a few years. And hallway sex is when husband and wife pass each other in the hallway and say, “Screw you.”

Recently, however, the press has been touting a fourth kind: the sex that hallway-phase couples start having after the wife reads novels by E.L. James, a virtual unknown–even in the wildly lucrative but disdained romance genre. Until recently James was posting her stories online for free, and she readily acknowledges that they are heavily based on another person’s work. Yet her trilogy Fifty Shades of Grey, Fifty Shades Darker and Fifty Shades Freed is set to be published by Vintage, a division of Random House, in a reported seven-figure deal. On March 26, Universal Pictures and Focus Features won a bidding war for the movie rights to the trilogy. Why the flush of interest? Because, according to news reports, her words are reducing the women of America to quivering masses of desire.

That a mother of two in West London and her tiny publisher in suburban Australia could reduce the U.S. media-entertainment complex to a quivering mass of its own is indicative of the ghost-train ride that publishing has become. The future of reading is dark, unknown and jerky, and hits could come out of nowhere. Most of the big players are just hanging on for the ride.

Perhaps no one else’s knuckles, however, are quite as white as those of James. In her other life, she is Erika Leonard, a Nutella-loving wife and mother of teen boys, who worked in the nonglamorous end of TV production, organizing contracts and clearances. To escape, she used to read a lot of romance novels–she still has about 700 of them in her attic. While her books are racy, Leonard is rather shy and prudish. She giggles, horrified, when asked to read aloud from one of the steamier passages she has written. She’s unnerved when readers divulge, as they are wont to do, explicit details about the effect her books have had on them. “I’m stunned by the reaction to these books,” she tells TIME in a video interview. At book signings, she says, “people tell me the most intimate things.” One couple who had been married 20 years but hadn’t had sex in four thanked her for reigniting the old flame. Another woman, Leonard says, “told me she got an orgasm just from reading the book.”

The novels follow the romantic education of Anastasia Steele, a klutzy, frizzy-haired university student and hardware-store worker from Portland, Ore., and Christian Grey, a formidably wealthy Seattle entrepreneur who falls for her when she interviews him for her school paper. Whence comes the romantic tension? What keeps these two from instantly getting together? Paperwork. Grey dearly wishes that Ms. Steele, as he often calls her, would sign a nondisclosure agreement as well as a contract in which she agrees to let him control everything she eats and wears and to let him “flog, spank, whip or corporally punish” her as he sees fit. And she can’t ever touch him. Also, she’s a virgin.

Despite the field-size red flags all this raises, she’s torn: “No man has ever affected me the way Christian Grey has, and I cannot fathom why. Is it his looks? His civility? Wealth? Power?” Nothing, after all, says civility like a guy who, when he trusses you up, uses an expensive necktie.

Leonard declines to elaborate on her own boudoir tastes but does allow that Grey is her dream man. “I wrote the books for myself. It’s my fantasy writ large,” she says. Readers tell her they want their men to read the books to pick up some tips. “There’s a sort of how-to thing in there,” she notes. Some of that counsel may be about milder bondage techniques, but readers tell Time they’re more aroused by the changes Grey is prepared to make for Ana. Leonard, who says her husband has been very supportive, if equally baffled by the attention the books have received, doesn’t want to get into any fine detail with men. “I get terribly, terribly squirmy and embarrassed,” she says. And for a woman who’s so bold in print, she makes no grandiose claims about her talent. “I don’t think I’m a great writer by any means,” she says. “But I can tell a story.”

Perhaps it’s more accurate to say she can adapt a story. E.L. James is not Leonard’s only pseudonym. In other venues she’s known as Snowqueens Icedragon, Icy or SQID. While James/Leonard/SQID loves romance novels, she was particularly transported when her husband bought her Stephenie Meyer’s Twilight novels for Christmas in 2008. Twilight, like many other works of fiction–Harry Potter, Star Trek, Pride and Prejudice–has inspired a lot of admirers to create their own adventures for the characters. Anastasia Steele and Christian Grey started life with the names Bella Swan and Edward Cullen, the human-vampire couple in Twilight. Fifty Shades was initially titled Master of the Universe (MOTU), and it lived along with almost 200,000 other stories in the Twilight section of FanFiction.net.

Writers of fan fiction, as might be imagined, are passionate readers. And they took to Leonard’s works with almost as much ardor as they took to Meyer’s, devouring each chapter she posted. She was invited to speak on fan-fiction panels at Comic-Con. Some people even made new fictional works that were based on MOTU. “It wasn’t the bondage stuff. It was the storytelling,” says Amanda Hayward, a fan-fiction fan and former quantity surveyor in Sydney. “At the end of each chapter, you wanted to kill the author because she hadn’t written any more.” Hayward started a publishing company, the Writer’s Coffee Shop, pretty much in her home, to distribute the works of fan-fiction authors. Leonard, whom she had befriended online, was one of the first authors she signed up.

When fervid fan-fictioneers found out MOTU was crossing over, some were jealous, some were excited, and all were chatty. They blogged about Leonard’s stories, other book sites picked up the news, and–sniffing the spicy hint of kinky sex–the mainstream media pounced. Word of mouth was key. Jen Boudin of Melville, N.Y., says she was told of the book by a friend: “She said, ‘You need to read it. You need to do it now, and you need to wear a panty liner.'” Perhaps because of Shades’ content, e-book sales of the 1,000-page trilogy soared, quickly hitting the 250,000-download mark, and the books took the first three spots on the New York Times e-book best-seller list. This created momentum and led to the Random House deal, hunger from Hollywood and blog posts from Ohio headlined “Fifty Shades of Grey. Oh My.”

At the center of it all is Leonard, the closet writer whom Hayward spent a year coaxing into publishing; whose sons, Leonard says, would be mortified if they read the books; whose office mates used to joke about her “smut”; and whose husband got crotchety as the tsunami of attention splashed over onto his little blog about writing for TV. “You’ve come to the wrong place–this is my soapbox,” he wrote in a March 6 post. “She has her own.”

In a way, as Leonard deals with the attentions of the U.S. publishing-and-media colossus, she is just like Anastasia, the e-mail-less virgin, trying to figure out whether to hitch her wagon to this new suitor with his peculiar appetites.

Spoiler alert: she’s all in. 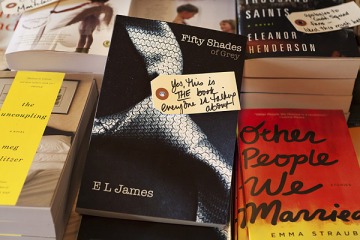 The Shy British Mum Behind 50 Shades of Grey
Next Up: Editor's Pick