A tractor trailer truck lies on its side in the median of U.S. Route 13 while a fire engine responds to a nearby campground after a severe storm passed through the area, Cheriton, Va, July 24, 2014.
Jay Diem—Eastern Shore News/AP
By Laura Stampler

At least two people were killed and 20 injured when a suspected tornado touched down at a Virginia campground Thursday morning, leaving overturned campers and injuries in its wake.

Corinne Geller, a spokesperson for the Virginia Police Department, confirmed that the weather event had left two dead. Earlier reports from a local fire department had said there were three fatalities.

At 8:38 am, the National Weather Service tweeted out a tornado warning for the area. The twister hit the Cherrystone Campground, near Cape Charles, shortly before 9 am.

While the weather incident can’t be confirmed as a tornado until a storm survey team has assessed the campgrounds, NWS meteorologist Mike Rusnak says that based on the type of thunderstorm in the area and “from the pictures we’ve seen, we do think it was a tornado.”

Jordan Bertok was on the campgrounds with her family at the time of the storm and has been tweeting pictures of the devastation. “Just lived through a tornado,” she wrote. “Children are missing. People are dead. Trees are down.” Continuing with the message: “This is hell. I’m in hell.”

Betrok’s grandparents went in their car to take cover. They were hospitalized for injuries, although Betrok said that they are “doing well.”

Local media outlet WAVY-TV reported that six ambulances and a mass casualty truck arrived on the scene to assist the injured and help transport them to the hospital. The news source also reports that some boats were flipped in Oyster Bay, although it’s unknown whether they were occupied. 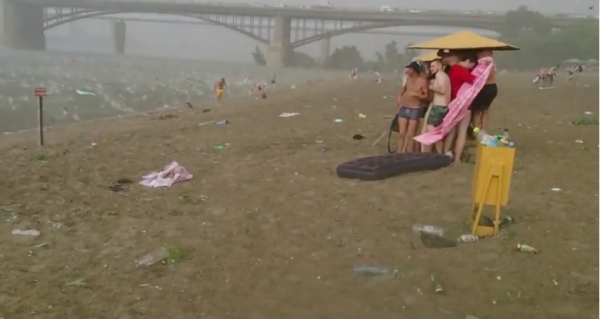 This Freak Hailstorm on a Russian Beach is Terrifying
Next Up: Editor's Pick