A Southwest Airlines plane sits at a gate at Dallas Love Field Airport on Feb. 3, 2014
Ben Torres—Bloomberg via Getty Images
By Stephanie Burnett

A Minneapolis father claims that he and his two daughters were booted from their Southwest Airlines flight from Denver to the Twin Cities after he tweeted a complaint against a “rude” agent.

Duff Watson said the Sunday episode began while trying to board a priority line with his daughters, who are 9 and 6 years old.

“I have been traveling with Southwest for a few years now, and I’m an A-list member,” Watson told ABC News on Wednesday. “You can board the plane early.”

A gate agent said he wasn’t allowed to board with his children — leading Watson to ask her if there was a new policy in place. But he says she didn’t give him a direct answer and told him that she wasn’t going to change her mind.

“We waited, which was fine,” Watson said. “I thought she was very rude and wanted to complain to customer service.”

So Watson asked for her last name and took to Twitter to blast the experience after boarding the plane with his daughters.

Shortly afterward, an announcement asked Watson to disembark from the plane and was received by the same gate agent. Watson said she asked him to delete the tweet and threatened to call the police if he didn’t.

“She said I was a safety threat,” Watson told ABC News. “I was shocked. There was no use of profanity, there were no threats made. How was I a safety threat?”

Watson soon relented, deleted the tweet, and reboarded the plane — though not without disavowing Southwest. “I’m not going to fly them again,” he said. Watson has also since made his Twitter account private.

Southwest issued a statement to a CBS Minnesota affiliate on the incident. WCCO reported: 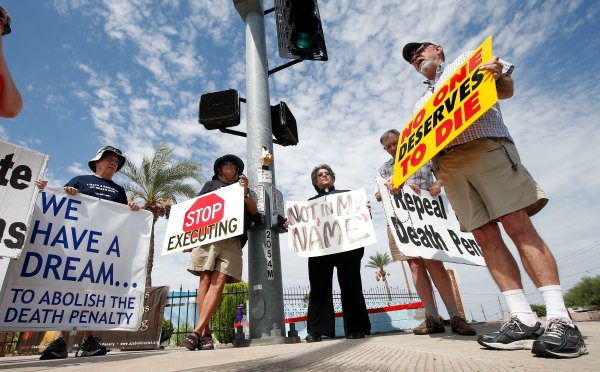 Inside Arizona's Agonizingly Long Execution
Next Up: Editor's Pick