A numbered coffin carried by Dutch military personnel contains an unidentified body from the crash of MH17 on July 23, 2014 at Eindhoven airport, Netherlands.
Peter Macdiarmid—Getty Images
By Charlotte McDonald-Gibson/Brussels

For a continent determined to present a united message of outrage and reprisals after the downing of Flight MH17 killed 211 of its citizens, the signals coming from the European Union this week have been contradictory.

While its foreign ministers emerged from a meeting Tuesday vowing strong and unified action, a cross-channel spat over the sale of French warships to Russia exposed the depths of the economic conflicts which have prevented the EU from hitting Moscow with the toughest tools in its arsenal.

Britain’s Prime Minister David Cameron said it was “unthinkable” that the UK would continue with the $1.62 billion warship deal, as France has done, given the Kremlin’s alleged backing of the Ukrainian rebels believed to have shot down the plane. The leader of France’s ruling Socialist Party, Jean-Christophe Cambadelis, hit back: “When you see how many oligarchs have sought refuge in London, David Cameron should start by cleaning up his own backyard.”

For Stefan Lehne, a former Austrian diplomat who is now a visiting scholar with the Carnegie Europe policy center, the spat underscored a “lack of coherence” among the 28 member states, and one which is unlikely to be solved in the coming days or weeks, despite last Thursday’s tragedy.

“The shooting down of this airliner has of course increased urgency and support for doing something, but it has not changed anything fundamental,” he says. “There are still all the different interests of the member states.”

So for now, the EU has continued with its policy of inching forward with low-level sanctions while issuing more ultimatums, a cycle it has pursued since a political crisis in eastern Ukraine escalated into a full-scale insurgency earlier this year: First, add more names to a list of Russian and Ukrainian individuals and companies with their assets frozen and banned from entering the EU. Then threaten to move to the most damaging ‘Tier Three’ sanctions – which would hit whole sectors of the Russian economy like banking, arms and energy – unless the Kremlin moves to de-escalate a conflict which EU leaders say it is fuelling by supplying weapons and manpower.

Inevitably, Putin takes a few steps in the right direction, and EU leaders breathe a sigh of relief that they do not yet have to sacrifice their €400bn annual trade with Moscow. But slowly the Russian tanks return to the Ukrainian border, the ceasefires disintegrate, and more Russian-made tanks and weapons seep into the rebel strongholds — again and again the cycle has repeated itself.

Europe’s leaders profess that the plane crash has ended this cycle, and on Thursday it will become apparent exactly what has changed when the EU reveals who else is going to be added to a sanctions list first drafted in response to Russia’s annexation of Crimea in March.

The list will go further than ever before, targeting people and companies providing material support to Putin. The EU will also review a set of proposals on potential Tier Three sanctions which could be implemented if Russia does not cooperate with an international investigation into the downing of MH17 and fails to halt the stream of weapons into the country.

Much of the discussion has focused on a potential arms embargo, but only for future sales. That would mean France could still sell Russia its two warships, while Russian money in Britain’s banks would be protected, German companies operating in Russia could continue their work relatively unimpeded, and eastern European nations which get 80% of their gas from Russia could be slightly more confident of the security of their winter gas supplies.

Carnegie Europe’s Lehne does not think the EU will move to any Tier Three sanctions on Thursday. Instead, he says it’s playing the long game. He believes that the gradual escalation of threats combined with an economic squeeze on key allies of Putin is having an impact on the Russian president’s decision-making.

Others think the time has come to get tougher. Elmar Brok, chair of the European Parliament’s Foreign Affairs Committee, said on Tuesday that Putin left open no “possibility of finding a political solution” and the EU should proceed with stronger sanctions.

The Lithuanian President, Dalia Grybauskaite, even made the comparison with appeasement in the Second World War. “In 1930s, Nazism wasn’t stopped, and now aggressive Russian chauvinism isn’t stopped and that resulted in the attack against a civilian plane,” she told a Lithuanian radio station.

Karel Lannoo, head of the Brussels-based Centre for European Policy Studies, points out that Russia has more to lose than Europe from any restrictions on Russia’s energy sector, which accounts for 50 percent of Russia’s federal budget reserves.

“[The EU] can act in a coordinated way, just show they can have alternate sources of energy, that they are not too dependent on Russia,” he tells TIME. “It’s an oil and gas country, and the moment they don’t have these exports anymore, their economy will fall down.” 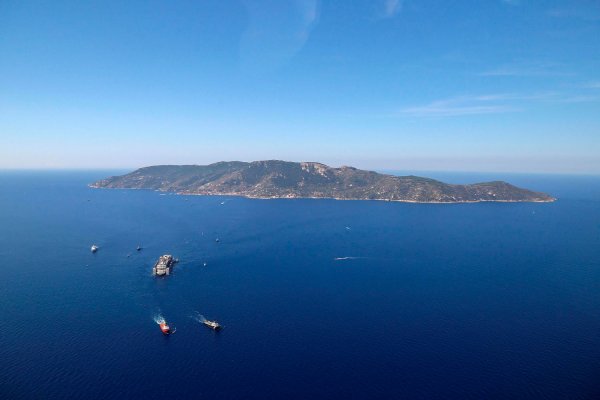 The Costa Concordia Makes Its Final Voyage
Next Up: Editor's Pick