The OSIRIS instrument on the European Space Agency's Rosetta spacecraft photographed the mission's destination comet on July 14, 2014, from about 7,500 miles away.
ESA/Rosetta/MPS/UPD/LAM/IAA/SSO/INTA/UPM/DASP/IDA
By Jeffrey Kluger

A comet has a lot to hide. To most people, it’s among the most glamorous objects in the solar system—brilliantly illuminated, racing through space with its glowing tail streaming far behind it. That, at least, is how comets look from great distances, and only when they’re close enough to the sun for the outward-flowing solar wind to light them up and produce those signature tails.

But deeper in space, without the solar floodlights? Not so much. There the comet reveals itself for what it is: a dirty snowball of ice and rock and not a whole lot more. There may be no comet for which that’s truer than the one known unlyrically as 67P/Churyumov-Gerasimenko, as this GIF made up of images taken by the fast-approaching Rosetta spacecraft reveals. The comet is a lumpy, two-lobed body, measuring about 1.8 mi by 3 mi. (3×5 km), which one astronomer compares to a rubber ducky, and most other folks would describe as just plain ugly.

But Rosetta is an anxious suitor all the same. The spacecraft, built by the European Space Agency, has been en route since its launch in 2004. Rosetta will rendezvous with the comet on August 6 and enter orbit around it shortly there after. In November, it will dispatch a small lander down to its surface—becoming the first spacecraft to master either of those maneuvers, never mind both.

The comet may never be much to look at up close, but the science it could yield—offering astronomers their closest ever look at one of the oldest artifacts of the ancient solar system—could more than make up for that. Appearance has never been everything—and in the case of a historic mission like this one, that’s truer than ever. 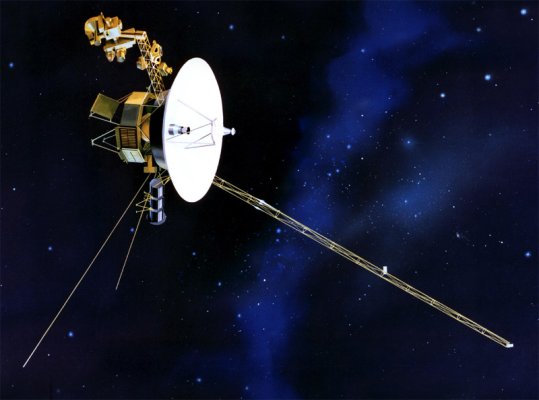 So Where the Heck IS Voyager 1, Anyway?
Next Up: Editor's Pick