Think Your Flight Delays Are Bad? Try China, Where the Military Hogs Most of the Skies

Last week, I flew in and out of Shanghai over two days. Both flights idled on the tarmac for more than one hour. I felt rather lucky.

Airport delays are such a constant in China that a mere one-hour wait is practically a gift from the aviation gods. International flight monitors put Chinese cities at the bottom of a list of on-time takeoffs at major airports worldwide. On July 21, nearly 200 flights leaving from Shanghai’s two airports, Pudong and Hongqiao, were cancelled. Around 120 more planes were delayed from takeoff by two or more hours.

The same day, a notice attributed by state media to the Civil Aviation Administration of China warned that a dozen airports in eastern Chinese metropolises would suffer even more serious delays through August 15. The reason? An unnamed “other user” would be hogging the skies. That aerial monopolist is thought to be the Chinese military, which even in this era of jam-packed commercial air travel still controls most of China’s airspace. On July 23, the People’s Daily, the mouthpiece of the Chinese Communist Party, tweeted a picture of dejected looking passengers camped out on the floor of the airport in Dalian, a port city in northeastern China. The cause, according to the paper, was mass cancellations stemming from “planned military activity.”

On Monday, Jiao Xuening, a resident from the southern city of Shenzhen, described on his Chinese social-media account how he had been stranded at a Shanghai airport for almost six hours. “At first I was disgruntled,” he wrote. But then he listened to a stream of flight cancellations over the loudspeaker. “I was told my flight was merely four hours delayed and was not cancelled, so I became happy again.”

On July 22, the Shanghai Daily, the state-controlled newspaper in China’s most populous city noted that Pudong airport’s outbound on-time rate had nosedived to 26% the day before. “Shanghai’s air traffic control authority has refused to explain” the Shanghai Daily complained of the delays. “With the authority remaining tight-lipped about the reasons behind this, speculation has been rife on the Internet.”

Such conjecture, though, can be dangerous. Earlier this month, some people had speculated online that a dragnet around a “high-ranking official” had perhaps prompted the grounding of planes in Shanghai. The Chinese authorities didn’t take kindly to such gossip; nearly 40 “rumor-mongers” were detained or “held” for wondering online about the flight cancellations, according to the Shanghai Daily.

The chronic flight delays are a huge hassle. But the opacity surrounding their circumstances also speaks to the inefficiencies of doing business in China. In the first half of 2014, non-financial foreign direct investment in China dipped, compared to the same period the year before. Government paranoia about social instability is such that Facebook, Google and Twitter are inaccessible within mainland China. Major foreign news websites are also blocked by censors. Basic things overseas businessmen expect to do can’t be done.

Then there’s the suffocating air pollution, which has dissuaded some expatriates from traveling to China, much less living here. Now, with the routine airport delays, it’s no longer practical to, say, fly from Hong Kong to Shanghai in the morning, attend a few meetings and then return to Hong Kong by the evening. A Beijing-Shanghai-Beijing run makes more sense by the punctual high-speed train service. But that still means committing around 10 hours to traveling the rails.

In the meantime, customer-service representatives for Chinese airlines are trying to cope as best they can. Political sensitivities are such that the carriers cannot complain about the Chinese air force’s monopoly of the skies. Employees for Air China and China Southern said they were only informed about the continuing air congestion the day after the latest round of delays began on July 21. Air China says it will send text messages to passengers’ cellphones to update them on the latest scheduling. “Most of our customers understand the situation,” said an Air China customer-service staffer in a somewhat beleaguered tone. To cope with the long waits in airports notorious for meager services, the statement attributed to the Civil Aviation Administration of China dispensed further advice: “Flight passengers please bring with you food and water.” 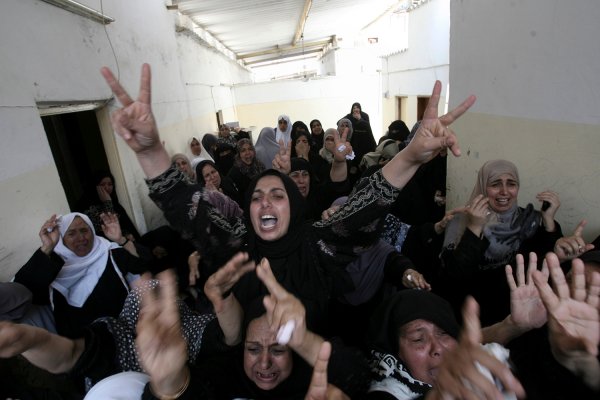 Palestinian Death Toll in Gaza Hits 650
Next Up: Editor's Pick