A humpback whale breaches the surface off the East Coast of Australia on Aug. 7, 2006
Russell Boyce—Reuters
By Ian Lloyd Neubauer

Right now, some 20,000 humpback whales are enjoying the warm waters of Australia’s East Coast, where they migrate every year during Antarctica’s winter to feed, breed and calve. They are the product of a wildly successful conservation program launched in 1979 that brought the humpback from the brink of extinction following decades of industrial slaughter.

The species’ recovery has also given birth to a thriving whale-watching industry that generates some $300 million and attracts 1.6 million people per year. From the beaches of Sydney, where surfers rub shoulders with the 30-ton mammals, to Queensland’s Sunshine Coast, where a rare albino humpback called Migaloo was last seen, the whales are a symbol of Australia’s love for the ocean and how far it has come from the cruel, unsustainable ways of its past.

But the humpback’s stellar comeback has also led to increasingly frequent “whale strikes” — collisions with ships that cause gruesome propeller lacerations and even sever spines. It is part of a global phenomenon seen from such places as Sri Lanka, the Mediterranean and the U.S. Atlantic coast, where overlap between busy shipping lanes and whale habitats has left trails of mutilation.

In early May, a Norwegian cruise liner unknowingly dragged a dead sei whale, which had become caught on its bulbous bow, into the Hudson River. Three days later, another sei was found attached to a container ship docking near Philadelphia. In June, a humpback known as Max that had been visiting Alaska’s Glacier Bay for 39 years was found floating dead in the ocean with its jawbone nearly cut off. The discovery became the subject of a investigation by Alaskan wildlife officials to identify the ship that killed Max — a near impossible task given that most whale strikes by large ships go unreported or unnoticed. Cambridge-based International Whaling Commission, the world authority on the subject, has struggled to quantify the problem. It can’t provide any kind of accurate numbers but nevertheless holds that for some whale species and populations, strikes “may make the difference between extinction and survival.”

Whale strikes don’t currently pose a tangible risk to humpback populations in Australia. But a controversial government decision to expand a series of coal ports along the coast of the Great Barrier Reef — the humpback’s most important East Coast calving ground — is projected to massively increase sea traffic over the reef. And that will spell carnage for humpbacks, according to the International Fund for Animal Welfare (IFAW), which is calling for the introduction of 10-knot speed limits for large ships in two key humpback habitats near two of the largest ports.

“From our organization’s point of view, the killing of even one whale is an issue,” says IFAW campaign manager Sharon Livermore.“But from the evidence we do have of whales that have been found dead or stranded, we know the number of reported strikes represents a small number of the actual number being injured or killed.”

“Calls for speed limits are very much warranted,” adds Joshua Smith of the Murdoch University Cetacean Research Unit. “We know humpbacks are already in conflict with shipping, and if you do the maths with these new megaports, you can see the problem is going to get much worse. A national whale-strike strategy is a sound precautionary principle.”

IFAW points to a similar initiative off the coast of the Georgia-Florida border, where 10-knot speed limits on large ships were introduced in 2008 to prevent collisions with critically endangered North Atlantic right whales. Thirteen rights were killed as a result of strikes in the 18-month period before the speed limit went into effect, compared to zero fatalities reported in the six years that have passed since. And in New Zealand’s Hauraki Gulf, the Port of Auckland has introduced voluntary speed restrictions to protect critically endangered Bryde’s whales after scientists estimated a 10-knot speed limit would reduce strike fatalities by 75%.

But Sheila Peake, a lecturer in ecotourism and environmental science at the University of the Sunshine Coast, says not enough is known about the humpback’s migratory routes in Australia to make speed restrictions effective.

“You can’t just say if we introduce speed limits for ships in one or two areas we will reduce whale strikes,” Peake says. “Not enough is known about the areas whales pass through to get there from Antarctica. And if you lay speed limits across the whole East Coast, it will have quite an impact on other industries and recreational fishing.”

Simon Meyjes, CEO of Australian Reef Pilot, a company that’s been guiding large ships through the Great Barrier Reef for more than a century, says 10-knot speed limits in front of coal ports will have next to no impact on reducing whale strikes because coal carriers steam at maximum speeds of 10 to 12 knots.

“I would say these slow ships account for two-thirds of the traffic on the Great Barrier Reef. The other third are faster container ships, livestock carriers and passenger ships that steam at 17 to 19 knots. They can’t be operated for long periods of time at 10 knots as the speed falls within those ship’s critical vibration range. It would risk major damage to their equipment and make it difficult to keep our supermarket shelves stocked.”

Meyjes also questions IFAW estimates that the number of ships passing through the Great Barrier Reef will almost double by 2020. “Shipping increases only as fast as the overall economy grows, so all these stories about huge increases are simply misguided,” he says. “In the last 10 years, traffic on the reef has increased an average of 3.5% a year.”

The Australian Maritime Safety Authority tells TIME it is liaising with IFAW and the shipping industry on the viability of speed limits, but that “given shipping is an internationally regulated industry … measures need to be linked to the strategic direction of the International Maritime Organization and supported by strong documentation.” In other words: Australia is unlikely to introduce speed limits until the movement to prevent whale strikes gains global traction.

In the sun-kissed Whitsunday archipelago 1,000 km north of Brisbane, Bill Hutchinson weaves and bobs his high-speed catamaran through waters literally heaving with humpbacks, carefully abiding to a local law that requires him to remain at least 300 m away from whales. In 44 years on the job, he’s never hit one.

“How do you avoid them? You can’t,” he says. “When the mothers are feeding their calves on the surface, they’re really docile. So we keep as far away as possible. But if it gets cloudy or the water gets choppy, visibility suffers. You can’t be watching out for whales all the time.” 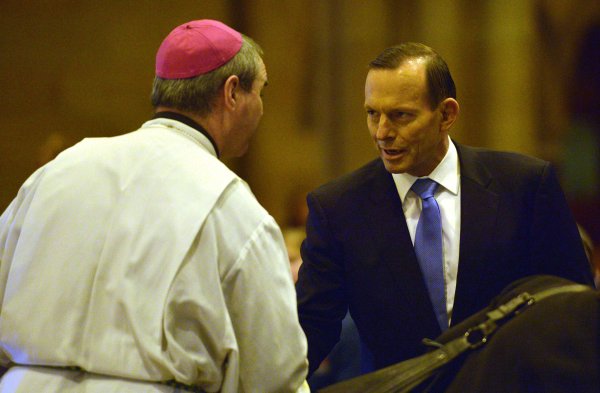 'Russia Can't Wash Its Hands'
Next Up: Editor's Pick