Home Movies: The Unreleased 1984 Oddball Nothing Lasts Forever Can Now Be Seen!!!

Thirty years ago this summer, Ghostbusters answered Hollywood’s call for a comedy blockbuster. The horror comedy, starring Saturday Night Live veterans Bill Murray and Dan Aykroyd, became the second biggest box-office smash of 1984, just behind fellow SNL refugee Eddie Murphy’s Beverly Hills Cop. So genial and lasting was the Ghostbusters vibe that the movie will be rereleased Aug. 29 in some 700 North American theaters.

Turns out that Ghostbusters, directed by Ivan Reitman, wasn’t the only fantasy comedy Murray and Aykroyd appeared in that year. Nothing Lasts Forever was the first feature film produced by SNL’s Lorne Michaels. Its 20-year-old leading man, Zach Galligan, had starred in the horror-comedy hit Gremlins, also from the summer of ’84. Nothing Lasts Forever boasted sumptuous music by SNL bandleader Howard Shore, who would go on to win Oscars for two of his Lord of the Rings scores. The film’s writer-director, Tom Schiller, had created some of SNL’s most distinctive early short films for Gilda Radner (“La Dolce Gilda”) and John Belushi (“Don’t Look Back in Anger”). The movie was scheduled to open in September 1984, and since part of the story takes place on the lunar surface, it almost could have been called Moonbusters.

Some people loved Nothing Lasts Forever, especially the programmers at the Cannes Film Festival. “I got a phone call,” Schiller recalled in 2010, “and they said, ‘You have created a masterpiece! You will be a sensation at Cannes!’” Yet the movie didn’t play there — and didn’t officially open in U.S. theaters. The bosses at its distributor, MGM, decided it had no commercial potential, even with the Ghostbusters and Gremlins stars, and aborted its release. The film got a few showings at museums but was never released either theatrically or for home video.

Not until this month, when an “unreleased upgrade” grabbed attention on YouTube, could viewers see for themselves the movie that provoked all those cheers, all that unease. This long-missing movie even comes with a conspiracy theory. “WhylamWhatham,” who posted NLF on YouTube, provided this note with the upload: “MGM has given many reasons for why this film was never released, but those reasons will be very obvious to those that watch, if you have the eyes to see. The masonic big whigs apparently did not want the profane to know some of the things this film contains.” The Masons? Paging Dan Brown!

(READ: Inside the Masons with author Jay Kinney)

Freemasonry aside, NLF is an authentic weirdie: a sci-fi comedy that’s short on special effects and laughs; a young man’s movie with a bizarrely high proportion of old actors; a saturnine satire with a soft romantic heart. There are color sequences, set in underground Manhattan and on the moon, but most of the movie is in a broody, noirish black-and-white. And if you’re wondering, Aykroyd is in just two short scenes lasting about a minute and a half, while Murray has a larger supporting role as a smiling, sinister “sky host” on a bus to the moon. Still, Nothing Lasts Forever, which clocks in at a tidy 80 minutes, is well worth checking out as a unique goofball experiment.

The trailer promises “Magnificence! The most spectacular film ever produced.” That’s a joke, since NLF is at heart a young man’s journey of artistic yearning. Galligan’s Adam Beckett is first seen as a pianist wowing a crowd of Carnegie Hall music lovers with his interpretation of Chopin’s Polonaise. But his virtuosity is a fraud — he’s been banging away on a player piano — and, just as the ruse is exposed, he wakes up from his nightmare on a train in Europe. A kindly stranger (Jan Trinka) encourages the lad to follow his artistic star, sagely predicting, “You will get everything you want in your lifetime. Only you won’t get it in the way you expect.”

(WATCH: the trailer for Nothing Lasts Forever)

Adam returns to New York to stay with his aunt and uncle (jazz singer Anita Ellis and comic monologuist Mort Sahl) and finds the city under the tyrannical control of the Port Authority, the transportation monolith that now requires passport verification of travelers from New Jersey and Connecticut. Proclaiming his artistic intentions, Adam is obliged to take a test drawing a nude model but flunks it and is assigned a job at the Holland Tunnel, where Buck Heller (Aykroyd) is his harried supervisor and one of his co-workers is art-world vamp Mara Hofmeier (Apollonia von Ravenstein). Adam and Mara become lovers until he realizes she’s cheating on him with a performance artist (Marc Alderman) whose latest project is to walk a million steps on a treadmill.

A random good deed — offering food, money and shelter to a homeless man — brings him into contact with an underground tribe of otherworldly alterkockers; these must be the Masons. The supposedly homeless fellow, Hugo (British actor Paul Rogers in a spectral-benevolent role much like the one Claude Rains took in Here Comes Mr. Jordan), introduces Adam to saintly Father Knickerbocker (92-year-old Sam Jaffe, who had played the title role in the 1939 Gunga Din and Dr. Zorba on the ’60s medical drama Ben Casey). “We shall show you,” he tells Adam, “that New York City is a dream created by higher beings as a temporary lodging place in the earthly sojourn.” He gives good-hearted Adam a mission — to colonize the moon with kindness — and adds, “You will meet your soul mate there.” Adam has the knack of meeting strange men who tell his future.

How to get to the moon? On an “Astrocruiser,” an ordinary bus with jet propulsion. Adam, who needs to escape both Mara and Manhattan, boards the bus believing it’s headed for Miami Beach, as indicated by a glimpse of his fellow passengers, all Social Security pensioners or older. So are the bus’s driver and stewardess. Adam doesn’t realize where he’s going until steward Ted Breughel (Murray as a friendlier version of the unctuous, showbiz-fringe performer he often played on SNL) identifies himself as the trip’s “sky host” and announces that shortly, “We will commence lunartini service.” (Moon-voyage perks include a free martini.)

Among the passengers are such veteran actors as Imogene Coca, Sid Caesar’s leading lady on Your Show of Shows; Coca’s husband King Donovan, who co-starred in the primal sci-fi film Invasion of the Body Snatchers in 1956; and Calvert DeForest, better known as Larry “Bud” Melman on David Letterman’s late-night NBC show. DeForest exudes his patented idiot enthusiasm when he exclaims, “That takeoff was a doozy!” and, later, “I can see the man in the moon — he’s smiling at me!” The headliner in the Astrocruiser lounge is Eddie Fisher, singing “Oh! My Pa-Pa” long past his crooner prime. When he mutters, “How the hell did I wind up singin’ on a bus to the moon?” a waiter (Avon Long) observes, “Must have been all them women, Mr. Fisher.”

Adam and the other passengers land to find that the moon is less Miami Beach than Honolulu: the lovely moon maidens dance to a “Lunar Hula.” One maiden, Eloy (Lauren Tom, later one of The Joy Luck Club daughters and a recurring voice on King of the Hill and Futurama), looks familiar to Adam; he saw her in his Carnegie Hall nightmare. Eloy is kin to the space cuties from ’50s endearingly trashy sci-fi movies — among them Cat-Women on the Moon and the Zsa Zsa Gabor Queen From Outer Space — and thus our hero’s predestined love interest. (Think Adam and Eloy.) Her name is also a variation on the Eloi race from H.G. Wells’ The Time Machine; in the 1960 movie version, Yvette Mimieux played the blondest, loveliest Eloi.

Eloy informs Adam that the U.S. first landed on the moon in 1953 and quickly turned it into a Disneyland-like “carousel of consumer values” known as Moon-O-Rama. She drives him on a gold cart past a cratered Luna 2 Soviet spacecraft from 1959 and a pair of audioanimatronic astronauts planting the American flag on the Moon’s surface. As Murray’s Ted brays, “Shop! Shop!” at the elderly consumers, Adam and Eloy plot a lovers’ insurrection.

In any movie era, NLF would be a misfit, but it can be seen as a remnant of that brief phase in the late ’60s and early ’70s when many American filmmakers were under the sway of European art cinema — Fellini, Godard, that crowd. Going even further back, Schiller pulls from a grab bag of silent-movie iconic scenes: the Babylonian set from D.W. Griffith’s Intolerance; the flight down the Odessa steps from Eisenstein’s Potemkin; the eyeball-slicing from Buñuel and Dali’s Un chien andalou. For those viewers who don’t want to ransack their old-film thesaurus, the director also offers the chocolate-factory assembly-line bit from an I Love Lucy episode in 1952 — just a year before President Eisenhower colonized the moon.

Visually inventive but a little lumpy in its pacing and direction of actors, NLF plays like a film-school project by a gifted tyro; it’s just that Schiller had a strangely starry cast and a $3 million budget. If the movie doesn’t quite work as either a comedy or a sci-fi homily, that could be because the director was really aiming for a musical romance. He and Shore composed several numbers for the film, most memorably the title love theme — a grandiose melody in the Chopin style performed by Tom (but sung in playback by soprano Mara Beckerman). “If this must be,” the climactic lyric proclaims, “let’s make forever never.” No, I don’t know what that means either. But I haven’t been able to get the tune out of my head. Maybe that’s the one thing from Nothing that will last forever.

In one sense, NLF is not anachronistic but prophetic. Adam evinces no talent for painting or writing or music, yet he believes he possesses an artistic impulse worth cultivating. That makes him the perfect prototype for this decade, when more college students major in visual arts than in all the more useful, potentially lucrative STEM fields (science, technology, engineering and math). Any film-studies grads, living jobless in their parents’ basements, could find some entertainment and much instruction in Nothing Lasts Forever. They should just keep in mind that, over the next 30 years, Schiller never got to make another feature film. After this honorable debacle, he earned a living directing TV commercials. 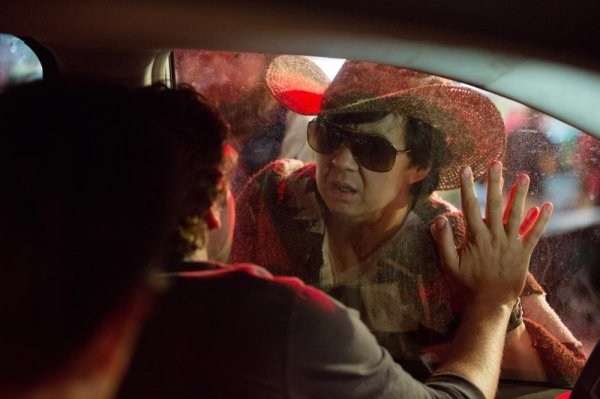 GLAAD Report: Only 17 Major Studio Movies in 2013 Had LGBT Characters
Next Up: Editor's Pick